Pureed caramelized onions are the key to this rich golden-brown gravy that everyone - meat-eaters and vegetarians alike - will be sure to gobble up.

I might be a vegetarian, but I refuse to miss out on gravy come Thanksgiving. Even if that means showing up at the door cradling my very own gravy boat full of Caramelized Onion Gravy.

The fact is, it’s easy to make a vegetarian gravy that everyone loves—and I do always make enough to share. In this version, caramelized onions lend more flavor than traditional drippings could dream to add. I truly believe it so.

I have a favorite, very simple onion gravy recipe that’s been my go-to for a while now. But this year, I decided it was time to up the ante. I wanted bigger, bolder flavor in a smooth, darker brown and traditional-looking gravy.

So I tried something crazy. I sliced up a big yellow onion and cooked it on the stove top, low and slow, until rich, sweet and golden. And then I threw it in the blender with a little broth, and I pureed it until silky smooth.

When added back into a bubbling batch of veggie gravy, the pureed caramelized onions add body, color and flavor. Yep, it totally worked! So, so good.

With fresh thyme, a bay leaf and a little Tamari for a bit of umami oomph, the flavor is slightly reminiscent of French onion soup - and it's insanely good over mashed potatoes.

If you want to save time on Thanksgiving, you can caramelize and puree your onions a day or two in advance. Just store them in an airtight container in the fridge until ready to add them to your gravy. The rest of the gravy comes together in a snap.

Or if you really want to do something crazy, you can freeze this gravy. Yep! Make it weeks ahead of time, even, then just thaw and warm it up in a saucepan on the big day.

If you're here planning your meatless Thanksgiving feast, be sure to check out my complete Vegan Thanksgiving eCookbook!

And don't miss these other popular Thanksgiving recipes: 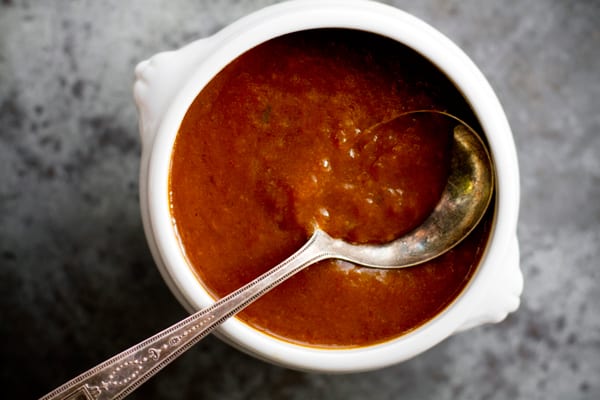 Most of the cooking time is the hands-off process of caramelizing the onions, which can also be done ahead of time. *You can use regular (not low sodium) vegetable broth. If you do that, I recommend using only ¼ teaspoon salt in Step 2 to start, then adding more at the end if desired