Do you ever go to a restaurant and order the same dish every time?

For better or worse, I'm a person who likes routine. Usually when I find something I like at a restaurant, I stick with it. My husband always ribs me for ordering the same thing time and time again, but it works for me, so why not, right? But there was one Mexican restaurant that we used to go to and both of us would order the same thing every time we went there—Veggie Fajitas. And then we'd both get a side of spicy, cheesy mashed potatoes. Even my husband couldn't branch out and try something different because the fajitas were just so flippin' good.

But then! One hot August afternoon, we went to get our usual fajitas-and-potatoes combo and what the server brought out to us shook me to the core. Oh yes, I was shook! Instead of the usual zucchini, onions, mushrooms, and corn, there on our fajita plate was a sad, soggy mix of onions, peas, and carrots. Frozen veggies! Frozen veggies that do not even belong in fajitas! Who puts frozen peas in fajitas? Who?! And even more importantly, why?

As much as I like routine, I'm also pretty resourceful. Since our favorite dish had been reformulated for the worse, I just had to make it at home. And then there were those cheesy potatoes too—those were integral to the whole veggie fajita experience. And thus my Twice Baked Salsa Potatoes with Fajita Veggies was born. You get cheesy potato goodness combined with yummy sauteed fajita veggies. In fact, we love these potatoes so much, we don't even miss the Veggie Fajitas at that unnamed Mexican restaurant anymore. 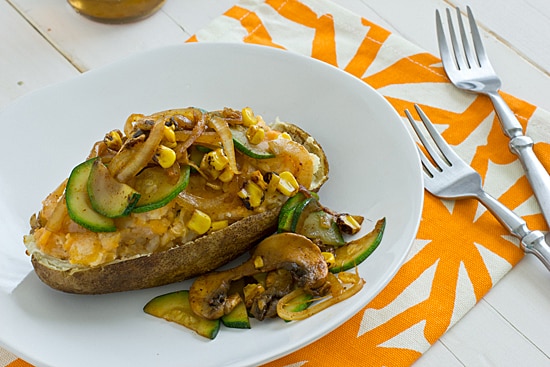