Make this easy vegan pumpkin stir-fry with Red Kuri squash or any other pumpkin variety and an abundance of vegetables for a dinner that's simple, healthy and comforting. It's brilliant for a cold evening in fall or winter, and ready in under 30 minutes. 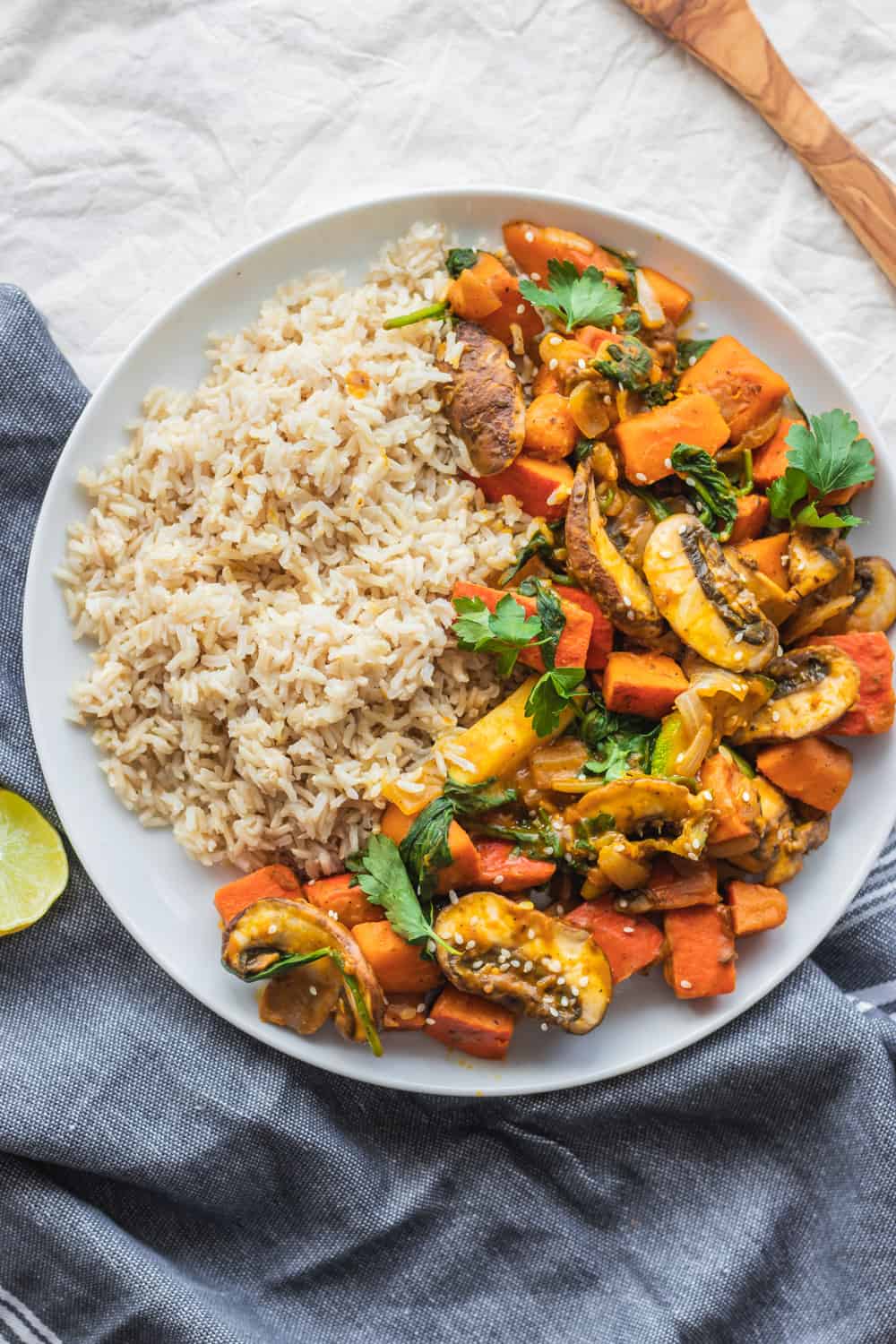 In my opinion, it’s never too early for pumpkin recipes. As soon as September 1st rolled around, I went to every grocery store looking for this wonderful orange vegetable. Only one had it. At least I got there in the end, with a bit of time and effort.

There’s also no such a thing as too much pumpkin. The more really is the merrier (even if things don’t get merry in a literal sense until Christmas). 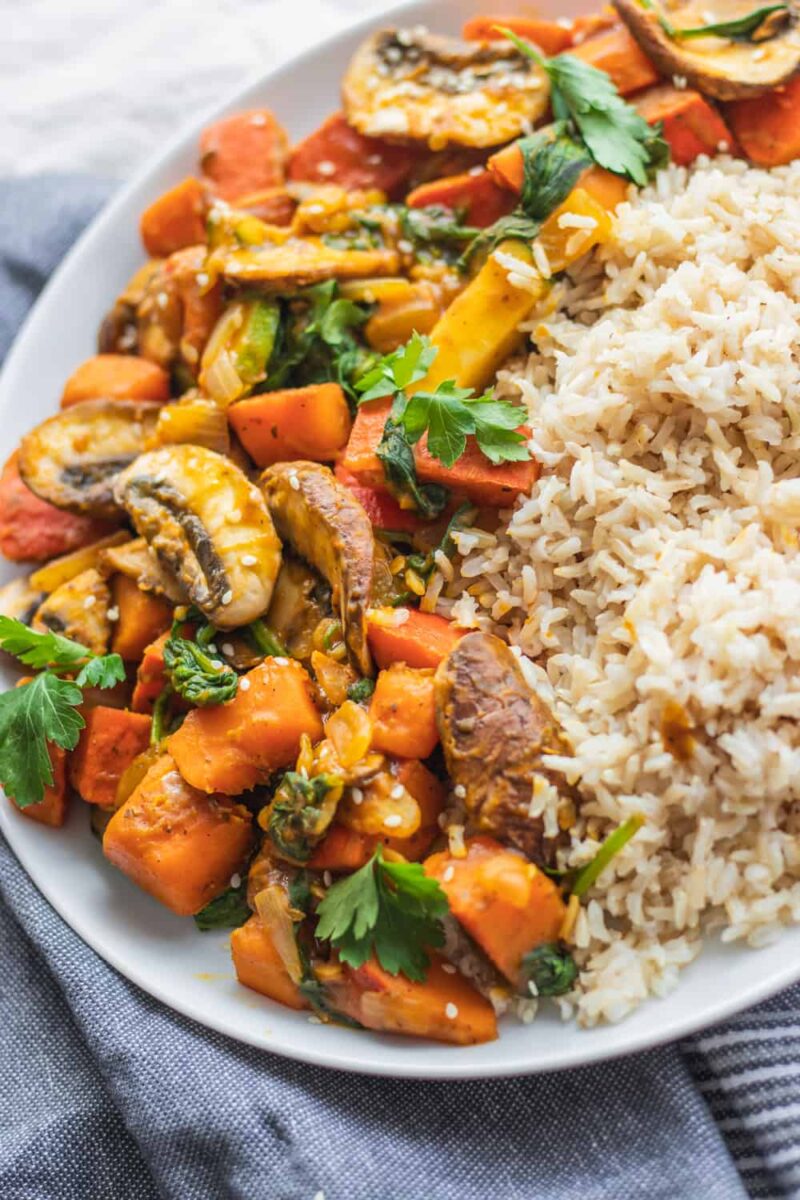 So, today I’m sharing a recipe that’s very representative of how I like to eat: simple, effortless, with plenty of flavour to go around. Except 'go around' insinuates sharing, but you'll definitely want to make a huge portion to keep all to yourself on a cold evening after a long day at school/work. In other words, if you want to enjoy pumpkin with little time and effort, easy vegetable pumpkin stir-fry is the recipe for you.

This is one of those meals that just brings you so much joy. I know that the word 'comforting' is overused, but it's pretty accurate. Served over a bed of rice, each forkful brings in so much flavour you almost forget that the veggies are super good for you. The sauce adds a hint of sweetness to compliment that of pumpkin. Put simply, it's incredible. I mean - I like to switch up my meals. Cooking is a creative outlet to me. But I have a feeling I'll keep coming back to this recipe as long as pumpkin season is here because it's too good to make only once (or twice, or three times...) and is a great reminder of how much you can create with simple, whole ingredients. 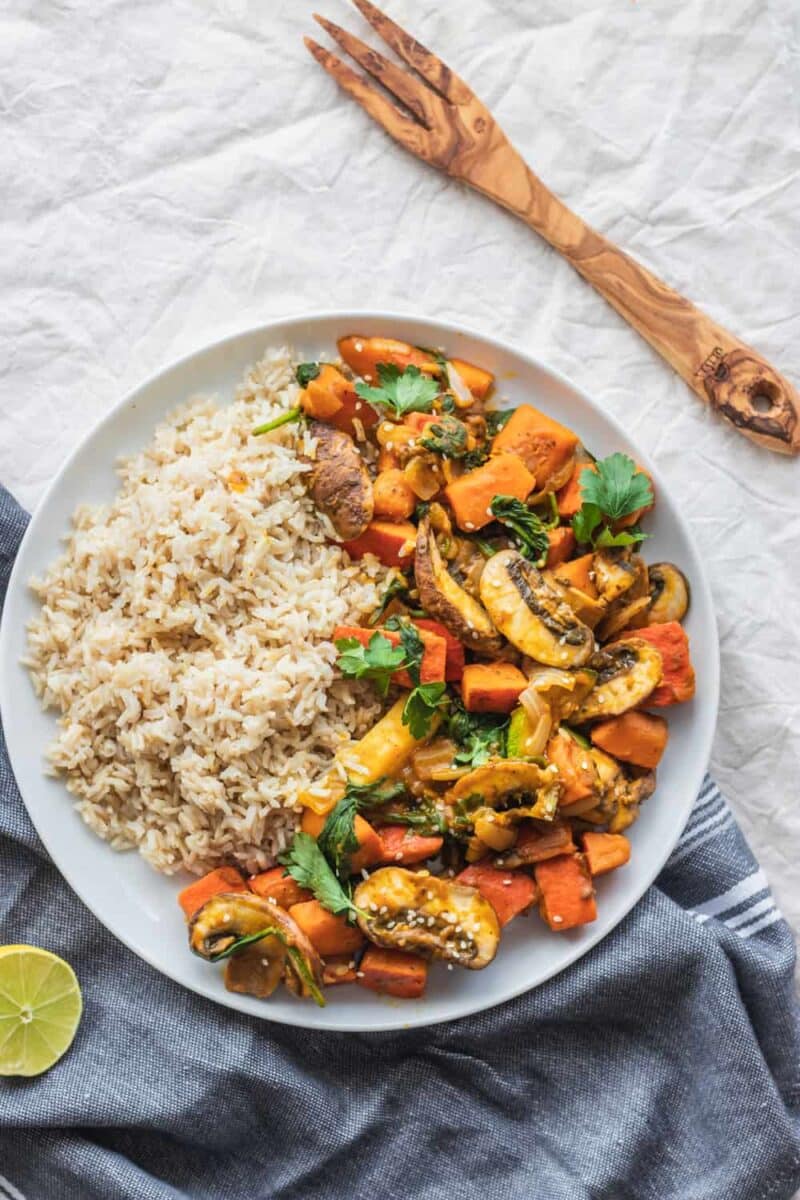 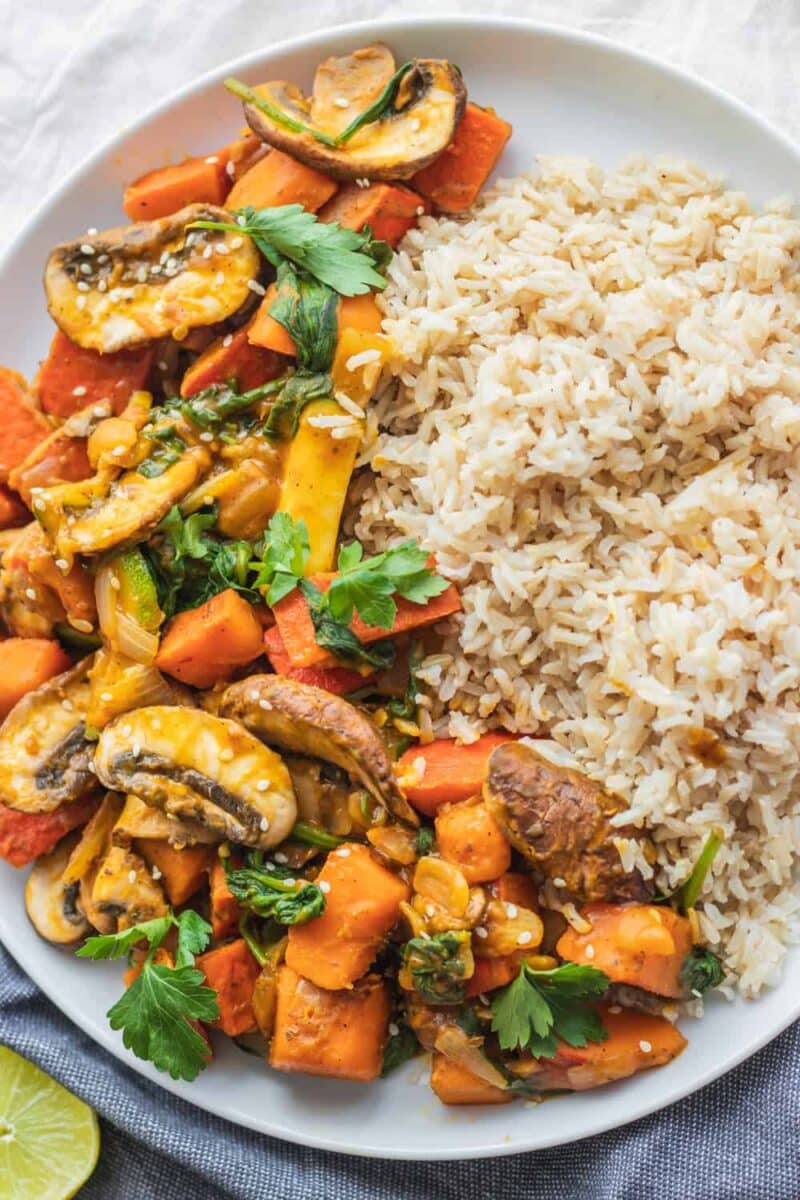 What pumpkin varieties can I use?

I’d 100% recommend you use red Kuri squash for this pumpkin stir-fry recupe. It has a subtle sweet flavour, a dense texture, and falls apart slightly throughout the cooking process to give more flavour to the sauce.

However, if you can’t find red Kuri squash or don’t have it on hand, feel free to replace it with any pumpkin variety. For example, butternut or Hokkaido squash would work well too because they’re on the sweeter side, just like kabocha (Japanese pumpkin). However, also keep in mind that some pumpkin varieties may cook quicker than others, i.e., the cooking times on the recipe card may vary. 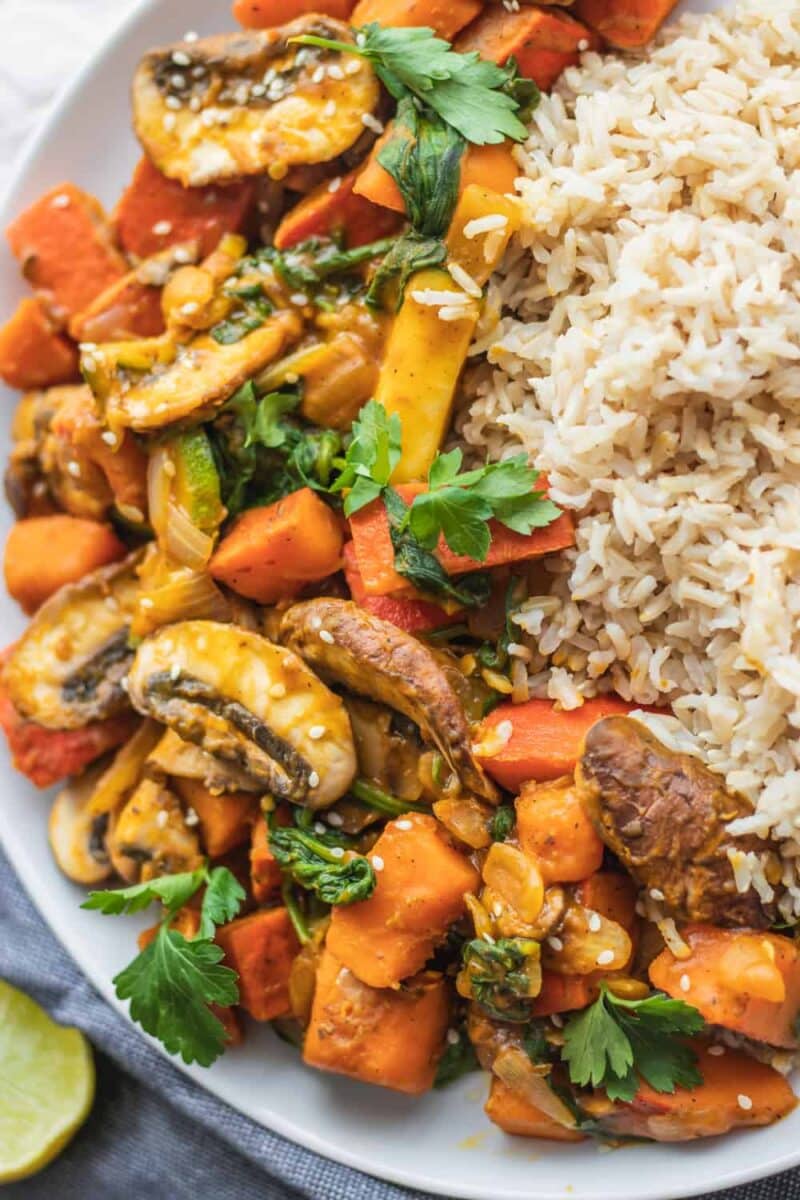 How to make pumpkin stir-fry

You’re probably used to roasting pumpkin in the oven. Here, it’s not necessary because the red Kuri squash cooks quickly in a frying pan/skillet. 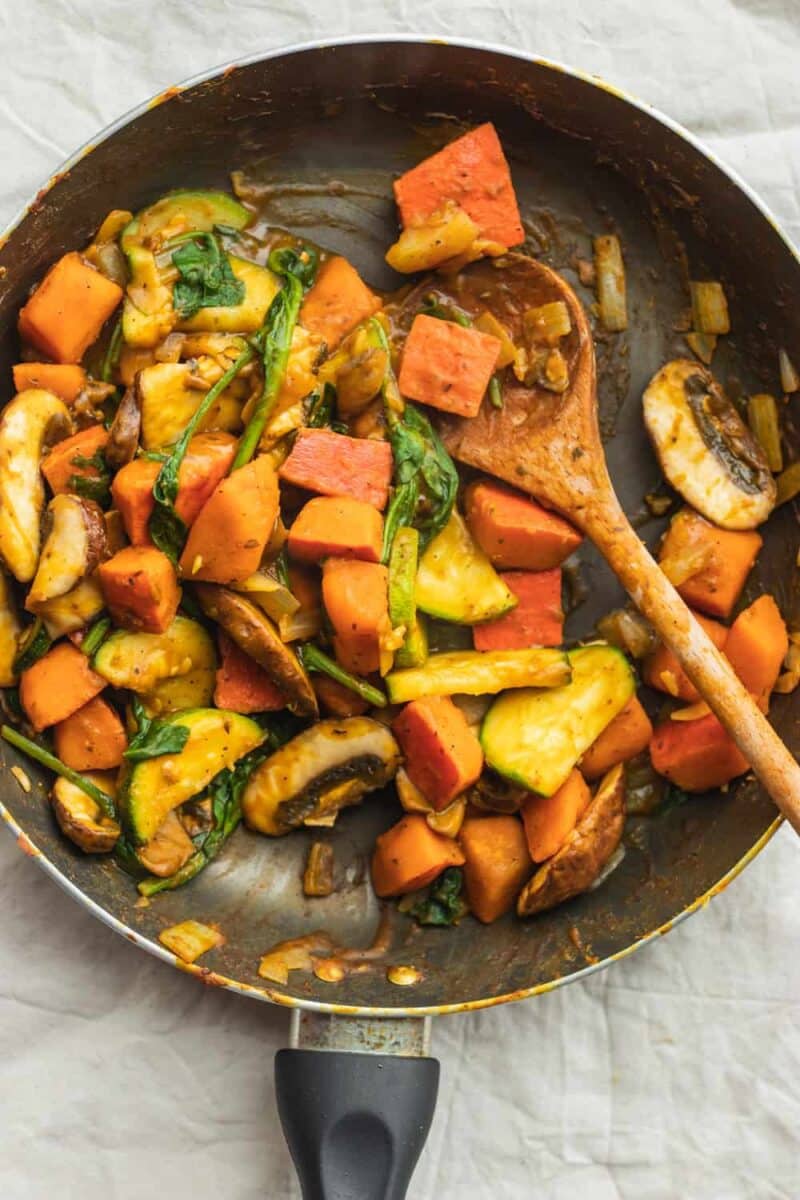 We'll start by adding the squash pieces to a frying pan with around ¼ cup water on a medium-high heat. Cook for around 5 minutes, until tender, and turn over the pieces occasionally to prevent sticking.

Next, we’re gonna add the remaining veggies with another splash of water. The vegetables I used are  zucchini, mushrooms and onion, but you can add in anything else you have in the fridge (carrots, bell pepper, aubergine, etc). Season with dried coriander and black pepper, stirring everything for 5 minutes until the veggies start to soften.

Then, lower the heat and add cashew milk for extra creaminess, followed by the sauce shortly after. The sauce we’re using is a simple combination of tamari (or use soy sauce/liquid aminos), liquid sweetener or your choice, water and corn starch. It’s super uncomplicated, but really helps bring out the flavour of the dish.

Continue stirring everything for another 5 minutes or so. At the last minute, turn off the heat and stir through a handful of spinach until it wilts down.

And that’s it - your vegan pumpkin stir-fry is ready! Serve with noodles or rice, garnish with sesame seeds and fresh coriander and you’ve got yourself a 25 minute dinner that’s healthy and tastes phenomenal. 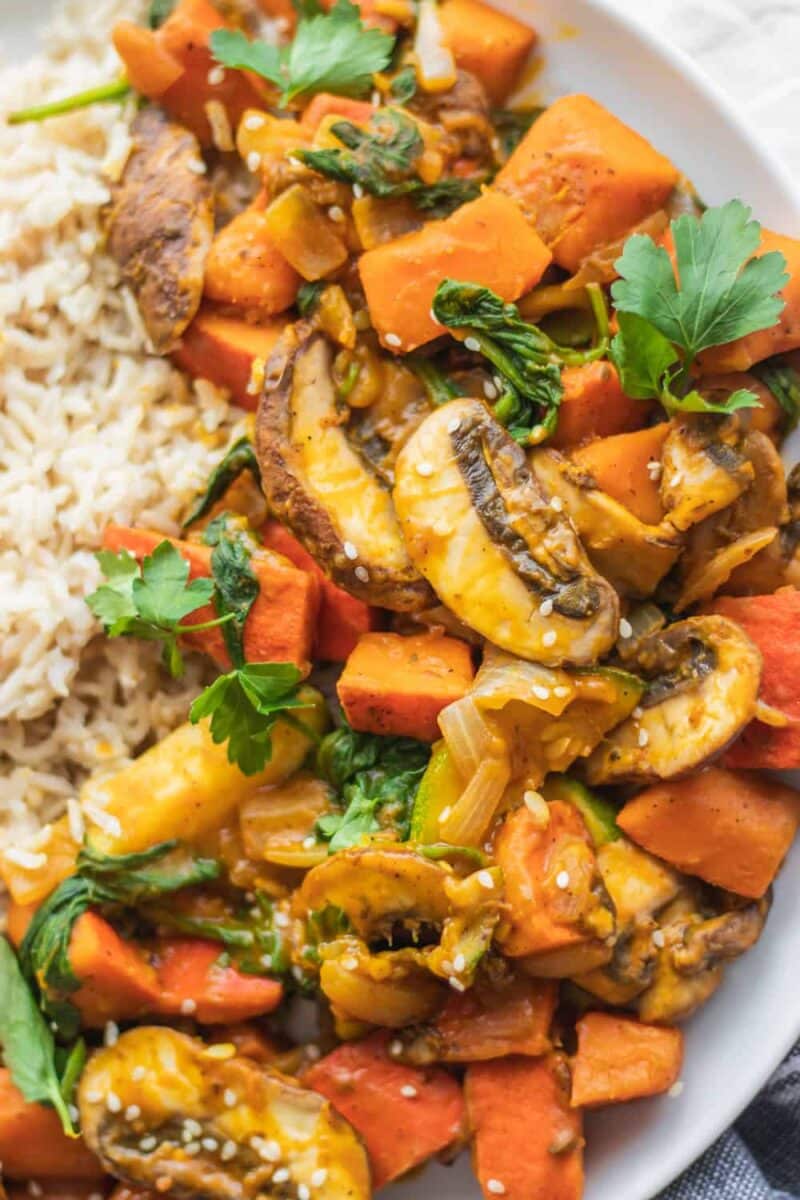 Let me know in the comments: what do you plan on cooking while it's pumpkin season? If you give this pumpkin stir-fry a go, don't forget to tag me on Instagram (@earthofmariaa) or leave a comment on Pinterest so I can see your creations! 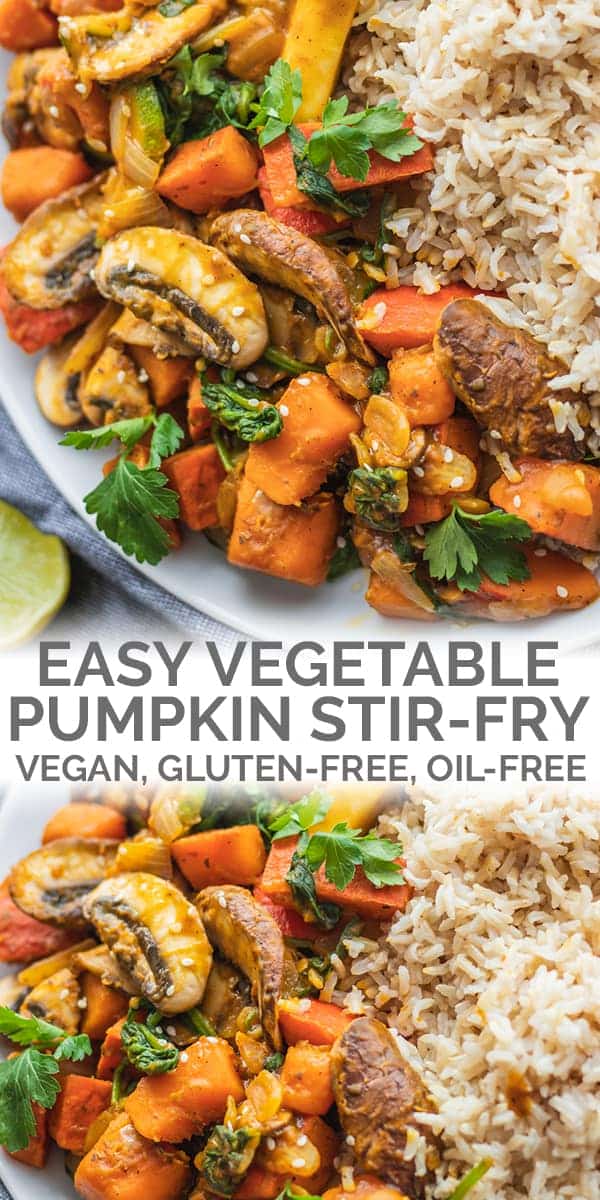