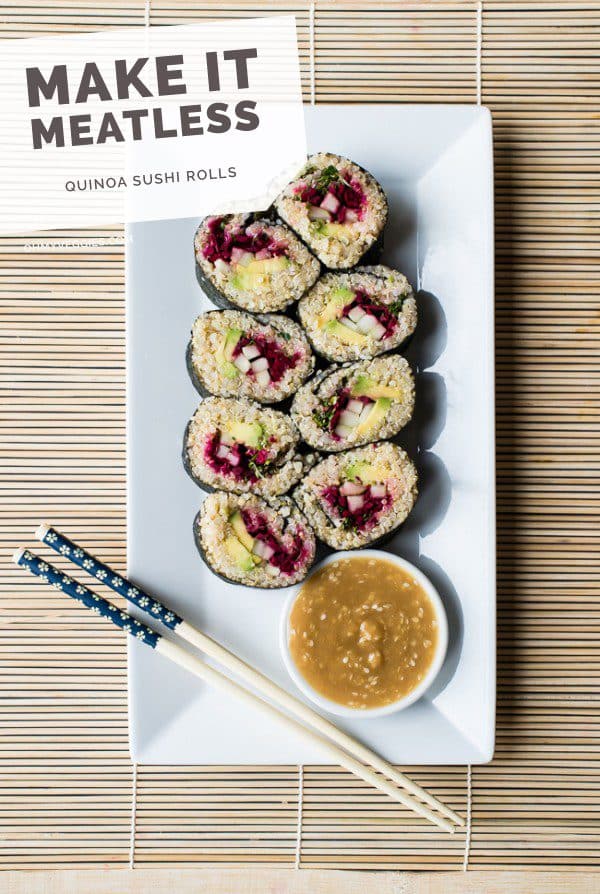 Quinoa is on a roll! Irresistible (and easy!) quinoa sushi rolls are made with hearty seasoned quinoa instead of rice, then packed with fresh veggies and served with an delicious dipping sauce.

Can I confess something? I bought everything to make sushi, um, three or four years ago, and it all sat in my cupboard because I never dared actually make it.

For some reason it was more intimidating than tackling a multi-step fancy cake or taking three days to make croissants from scratch.

I think I sometimes erroneously assume that certain foods are going to be extraordinarily hard to make at home. Sushi is one of those things. What if I make it incorrectly? What if it falls apart? Valid concerns, sure. But a little irrational, too.

Fast forward a few years, and I'm braver in the kitchen. I was ready to tackle not just sushi rolls, but quinoa sushi rolls. Swapping out quinoa for sushi rice added another level of trepidation, but I have seen loads of recipes on other blogs and websites, and I've even seen them in the refrigerated section at my favorite stores. It was time to conquer them at home.

Spoiler: it's pretty much the same as using rice. I worried that the quinoa would not stick together, but it totally did!

The quinoa is cooked with a little less water than normal, then the sushi-su (seasoned rice vinegar) is added and the hot quinoa absorbs the extra liquid. It's a beautiful thing. (And I dare you to not eat all that quinoa as you're waiting for it to cool to room temperature.) The hardest part was narrowing down which fillings I wanted to use.

Nori, the thin "paper" made from seaweed, is an integral part of any sushi roll, quinoa or otherwise. It's so thin and seems so fragile, but it's remarkably pliable. (So don't be like me and wait for four years to finally get around to using it!)

For these quinoa sushi rolls, I used my favorite combo of fillings -- sliced avocado, shredded raw beets, broccoli sprouts and julienned cucumber. I love the way they play off each other. Creamy, crunchy, earthy, and slightly pungent—in a good way.

Assembling the sushi rolls, as I've said, is so much easier than you think it will be! Lay a piece of plastic wrap on top of a bamboo sushi mat and be sure to leave enough of a border around the edge of the nori so that it will seal nicely. That's key so the rolls don't fall apart when you pick them up.

The filling goes neatly into the center. Then you pick up the edge of the sushi mat, which aids immensely in the rolling process. If you don't have a bamboo mat, they are super inexpensive and you can find them at practically any Asian market or kitchen store, and even some grocery stores. They only cost a few dollars and do make rolling much easier. I got this one from Amazon.

Cut the rolls into 6-8 pieces with a very sharp knife. (Amateur tip: cut these while they are still wrapped in plastic because it helps them stay together.) And all that's left to do is stir together the sauce and start noshing!

And if you love these quinoa sushi rolls, be sure to check out these other tasty recipes: 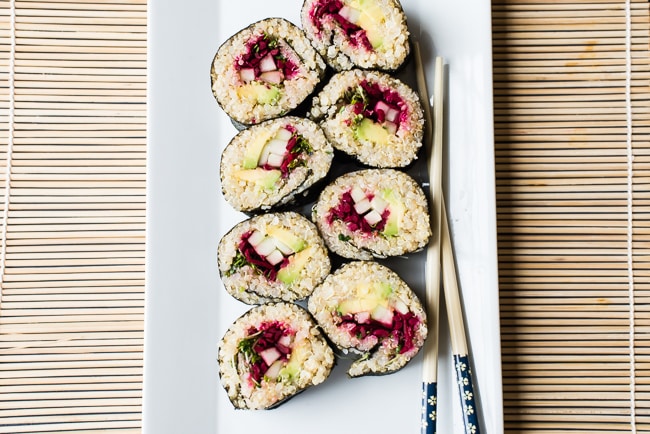 For the Quinoa Sushi Rolls:

For the Miso-Sesame Dipping Sauce: