I love to cook. (I’m sure you've figured that out. I probably wouldn't be writing for this blog if playing around in the kitchen wasn’t my idea of a good time.) Like many who love to cook, though, I have my kitchen inhibitions. There are two things that might make me a little reluctant to prepare any given meatless dish: 1) It’s loaded with calories, or 2) There's some step involved that’s a royal pain.

Unfortunately, one of my favorite Indian snacks hits these two criteria right on the nose: veggie samosas (a.k.a., little pockets of spiced culinary comfort). Samosas are delicious Indian dumplings filled with spicy veggies—usually potatoes and peas, all wrapped up in dough and fried to a crisp. Obviously, with the potatoes and the frying and all, they’re pretty calorically dense. Then there’s the preparation. Frying with anything more than a coating of oil is a pain if you ask me, and that crispy fried exterior is a dough that you’d normally have to devote time to mixing, rolling and wrapping. And so, my beloved samosas end up right in my “foods to avoid making” category.

Samosas are incredibly delicious though, so these issues were worth solving. How could that be done? The answer turned out to be quite simple: ditch the wrapper!

Without the wrapper you’re left with just that spicy veggie filling that I mentioned, and since that filling is primarily made from potatoes, it shapes into patties easily. I used traditional samosa spices in this recipe, and added some roasted peanuts, which you’ll occasionally find in samosas when dining out—and which give these samosa cakes a bit of crunch. Samosas are usually served with a chutney, and since apples are bountiful and delicious this time of year, I went with a tangy apple chutney.

These were quite fun to make, and pretty painless. They’re fun to eat, too; you can pile a couple on a plate as a main course, throw one or two on a bun and eat as a burger, chutney atop, or serve them to your dinner guests as a snack or appetizer, chutney on the side. 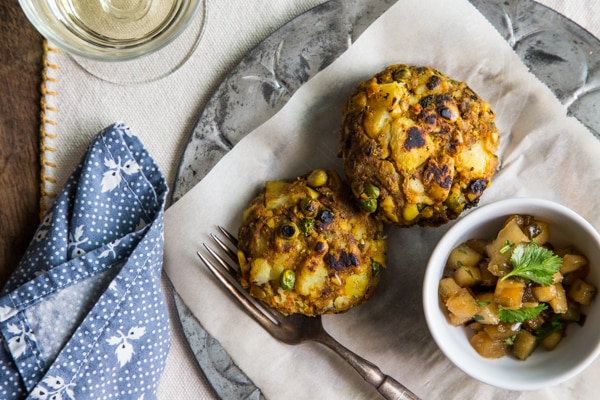 For the Apple Chutney:

For the Samosa Cakes:

Handle the cakes gently, as they're vegan and don't contain eggs, which act as binders in many similar non-vegan recipes. The flax and flour, along with the starchiness of the potato, helps with that, but you'll still want to use some caution, particularly when flipping them. You may want to cook your cakes in batches, depending on the size of your skillet. Be sure to give yourself plenty of room to flip the cakes. If your oil dries up, coat the skillet with another ½ tablespoon between batches. For a milder version of the chutney, cut back to 1 serrano pepper, or omit the peppers for a no-heat version.