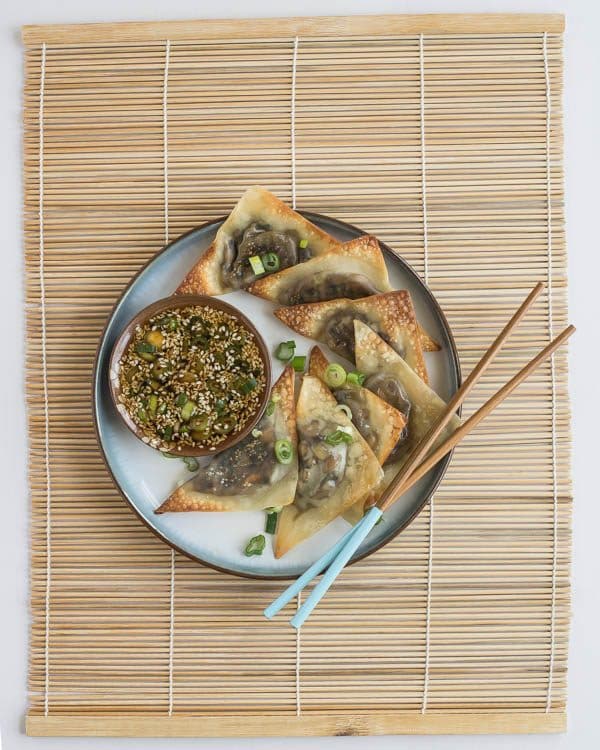 Baking these mushroom wontons in the oven makes them crispy without frying - they're just perfect as an appetizer or light dinner.

Even though I love to cook, I have very little patience for tedious processes like folding wontons properly. Whenever I make wontons, I fold them in half and that's that. Done!

Whenever my husband makes wontons, he takes the time to make sure they're all perfectly shaped and he gives me the side-eye over my lazy wontons, but I've discovered that lazy wontons have a purpose beyond my laziness.

Lazy wontons are the best wontons for baking!

Since they have an even surface and no nooks and crannies, they crisp up pretty evenly in the oven. I've tried baking other shapes of wontons and the ones that are folded in half work out the best by far.

It's still a little tedious to prepare them, but the short time in the oven makes up for the longer prep time. If you've never made (lazy) wontons before, here's how you do it:

The filling for these Ginger-Mushroom Wontons is meaty, slightly sweet, and the ginger and white pepper give it a little kick.

If you don't have white pepper on hand, don't go out and buy it - a little freshly ground black pepper will do or just skip the pepper altogether. White pepper is spicier than black pepper, so you may want to start with just a pinch if you're not big on spicy foods and add more to taste.

You'll have leftover wonton wrappers, which is convenient because I just happen to have a dessert wonton recipe too — make it without the coconut caramel sauce and ice cream and all you'll need for that recipe is a ripe banana.

I've also been known to chop up stray peanut butter cups and stuff them into wonton wrappers for baking because I'm resourceful like that. I'm pretty much the MacGyver of wontons.

If you're not going to use the leftover wonton wrappers right away, they also freeze well — keep them in the package they came in and tape it shut, then stick them in a small freezer bag before freezing.

And if you love these mushroom wontons, don't miss these other delicious recipes: 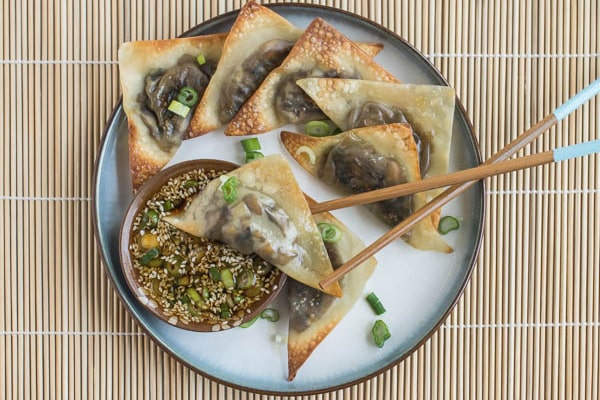 The sesame oil used for the wontons is plain sesame oil -- not toasted! If you don't happen to have it, any cooking oil with a high smoke point can be substituted.