Serve a delicious and fluffy vegan cinnamon pancakes drizzled with a rich chocolate cashew sauce for a relaxed weekend breakfast. Even better with dairy-free yoghurt and berries of your choice! Gluten-free, super easy to make.

In my opinion, nothing can beat a stack of pancakes on Sunday mornings. Although I'm not gonna lie, I'm all for eating them on any day of the week at any time (midnight snack goals, anyone?!). Whenever I have a little bit of extra time in the morning, I head straight to the kitchen and get straight to the pancake-making process. It always sets the tone for a good day!

On the one hand, a pancake breakfast takes a bit longer and a pinch more effort than a bowl of oats or a smoothie. But the extra care that goes into crafting a pancake stack is always worth the outcome.

They just feel more special, and give my morning a cosy, relaxed vibe, particularly when I find the opportunity to enjoy them as a breakfast in bed! Doesn't happen that often at uni because I spend most mornings (the peak of my productivity) at my desk writing essays, but when it does, I soak in every moment.

I think I should first of all mention the apple sauce, which adds a wonderful yet subtle flavour to create the apple and cinnamon combo that's very hard to outdo. If you want to make egg-free pancakes, it's a perfect wholesome egg replacer.

The addition of apple sauce brings everything together and gives the pancakes a slightly spongy texture without cancelling out the fluffiness we all love in this dish. I also added a little bit of soy yoghurt which, like the apple sauce, improves the texture and stops the pancakes from falling apart.

The batter is oil-free and made from healthy ingredients (oat flour being the main one), not to mention super versatile as far as toppings are concerned. Just throw on whatever fresh fruits and/or berries you have in the fridge, and you're good to go. I love blueberries and strawberries in particular.

How to make these simple vegan pancakes

First, simply add all the ingredients to a bowl and mix together thoroughly using a spatula or a spoon. Make sure there are no lumps remaining in the batter.

Preheat a large, non-stick frying pan over a medium-high heat. You can use a little bit of oil or cooking spray if you want, to prevent sticking. Pour out around 2 tbsp batter per pancake and cook for 2 minutes, until golden brown around the edges.

Flip and cook for a further minute on the other side before serving.

The simple chocolate sauce these cinnamon pancakes are served with is not to be missed! I always make a little extra to eat by itself or store in the fridge to later use in other recipes (try it on porridge and thank me later).

You only need 4 ingredients: almond butter (or any other nut butter of your choice), cacao powder, maple syrup and plant based milk. Whisk everything together and you're good to go!

Keep these pancakes in the fridge in an airtight container for around 2 days, reheating in the toaster before serving. They are also freezer friendly: you can keep them in the freezer for around 2 months.

Let me know in the comments: what are your favourite pancake toppings? If you try out this recipe, be sure to tag me on Instagram (@ohmyveggies) so I can see your creations, and leave your feedback in the comments below together with a star rating. 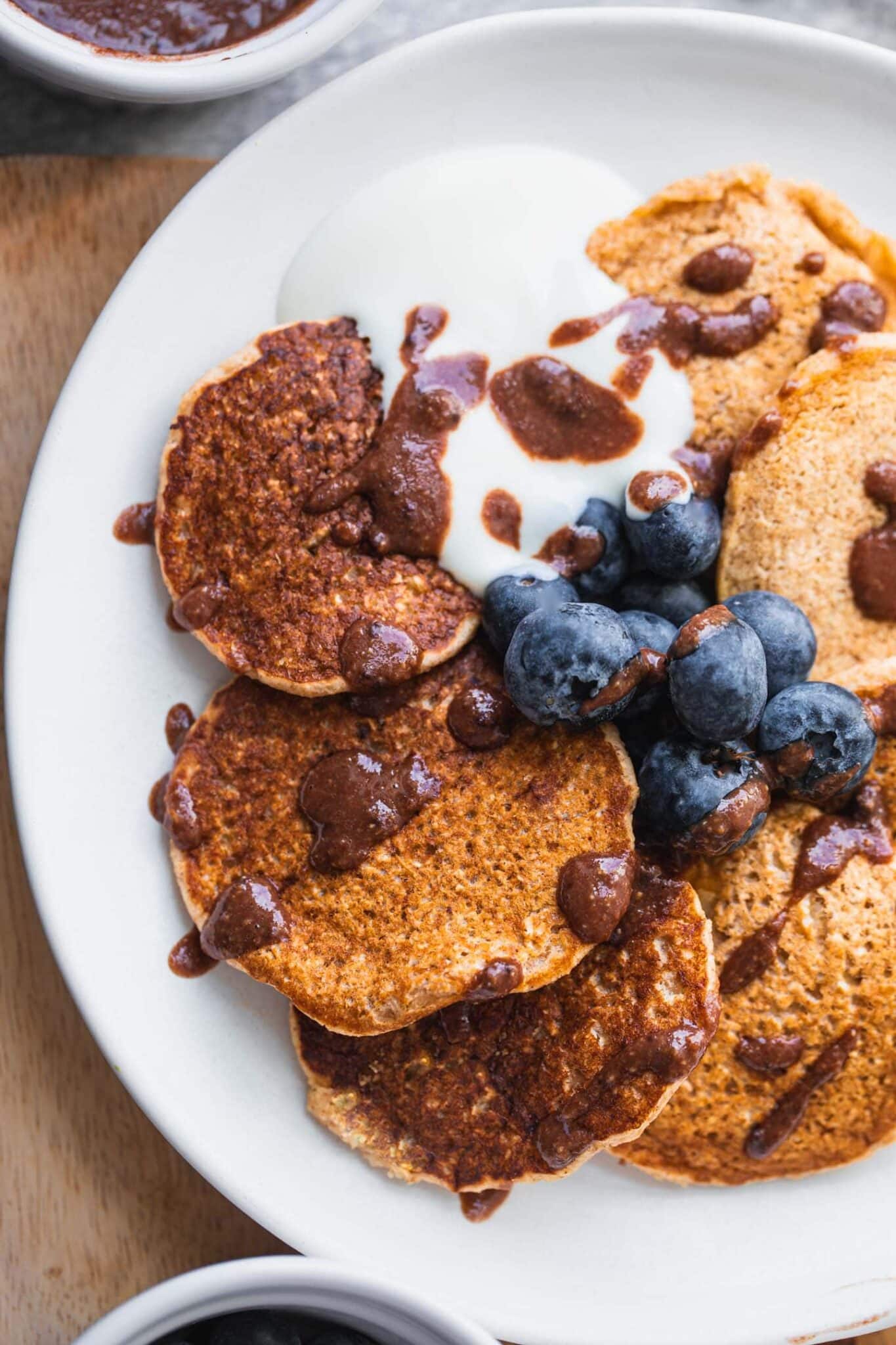