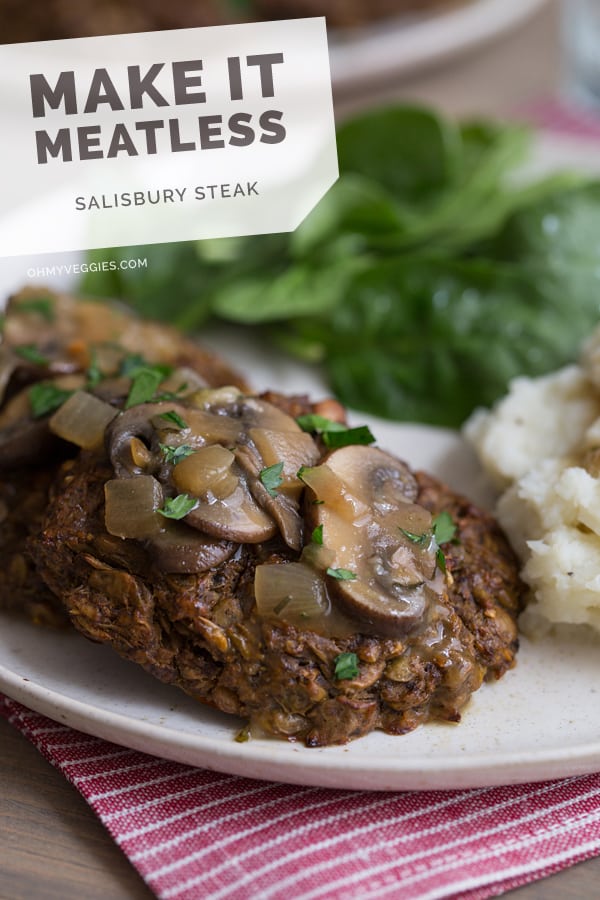 For the past month and a half, we've been having Salisbury Steak once a week for dinner. I wanted this recipe to be perfect, so every week, I'd make it in a slightly different way. With oats, without. With ketchup, without. Pan-fried or baked. It was like March Madness all up in my kitchen, except the brackets were made up entirely of vegetarian Salisbury Steaks. I'm betting my money on savory deliciousness!

My mom never made Salisbury Steak when I was a kid, but I loved it in TV dinners and hot lunches at school, on the rare occasion I'd get them. (I think the congealed gravy was my favorite part--I mean, it must have been, because the meat had the texture of an old sponge.) Salisbury Steaks are traditionally cooked in that gravy; you cook the steaks, take them out of the pan, make the gravy, then put the steaks back in the pan to let them soak it up a little bit. After a lot of experimentation, I realized that this didn't work for my vegetarian Salisbury Steaks--they soak up too much of the gravy, get mushy, and fall apart. So instead, I baked the steaks in the oven, whip up the gravy while they're baking, and then spoon the gravy on top. 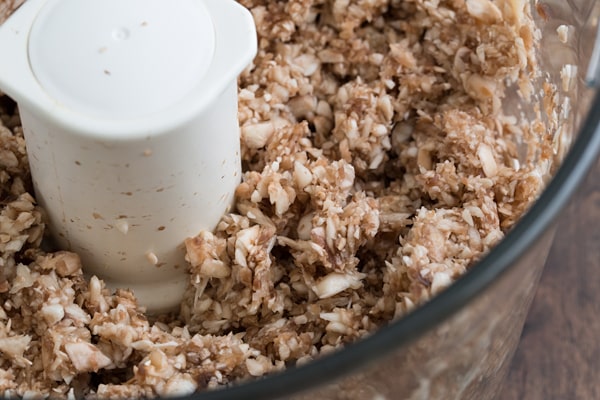 These steaks are made with my little trifecta of mushrooms, lentils, and oats. This is the same combination I use my my Lentil Mushroom Meatballs and Lentil Mushroom Burgers. I tried a few other ingredients in this recipe, but settled on those three because they just work! The mushrooms are pulsed in a food processor until finely chopped--you don't want a puree, but you want it to have almost the consistency of crumbled ground beef. Thyme and sage, ketchup, tamari, and vegetarian Worcestershire sauce add lots of flavor to the faux-beef mixture.

Because there's extra gravy, you'll want to serve this recipe with mashed potatoes or cauliflower on the side. We rounded things up with a simple spinach salad too, although steamed green beans or broccoli would be just as good. This makes a perfect Sunday night dinner and the leftovers keep well, so they're great for bringing to work the next day. 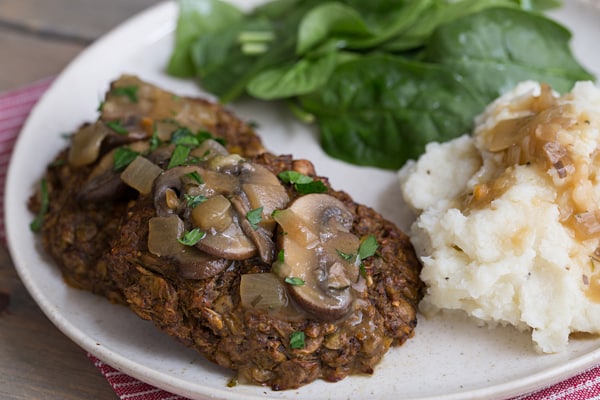