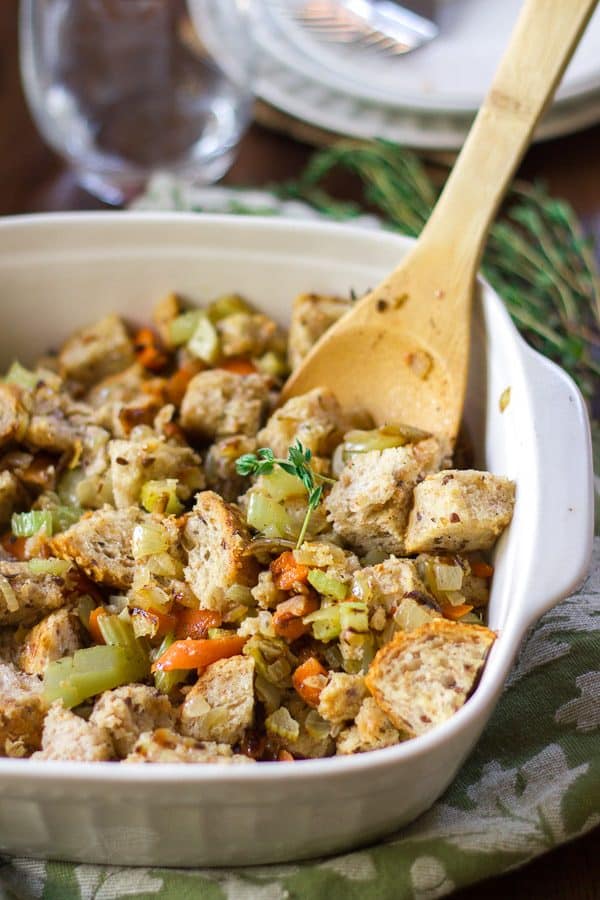 This savory stuffing tastes just like traditional versions of the dish that you probably grew up eating, but it's completely vegan!

Having first gone vegetarian back at the age of thirteen, I’ve spent many-a-holiday dining on salad. People tend to panic a bit when feeding vegans and vegetarians, and I always feel bad.

Salad avoids having to make people go out of their way, and I know that when you’re unfamiliar with meatless and dairy-free cooking it can be pretty intimidating.

As a blogger I get lots of questions from readers on how to accommodate their guests’ dietary needs. I usually point them to a few recipes and make suggestions for easy ingredient swaps.

That was before I got my hands on a copy of Isa Chandra Moskowitz’s new book, The Superfun Times Vegan Holiday Cookbook. This book is jam-packed with recipes for every holiday occasion.

I expected the book to include just recipes for the end-of-year holidays, but it actually covers everything from the Superbowl to Chinese New Year to Cinco de Mayo.

I chose to make the traditional stuffing because I always miss out on stuffing. So many times I've had a host that was thoughtful enough to cook some stuffing outside of the turkey, only to find out it was made with chicken broth. This stuffing is totally vegan -- no chicken broth here!

But it's flavorful and savory enough that I don't think anyone would know the difference.

So far I've also tried the creamy whipped potatoes from the book, and they were fantastic too -- the first vegan mashed potato recipe I've tried that actually tastes like my mom's fluffy mashed potatoes.

You can purchase The Superfun Times Vegan Holiday Cookbook here.

And be sure to check out these other delicious recipes: 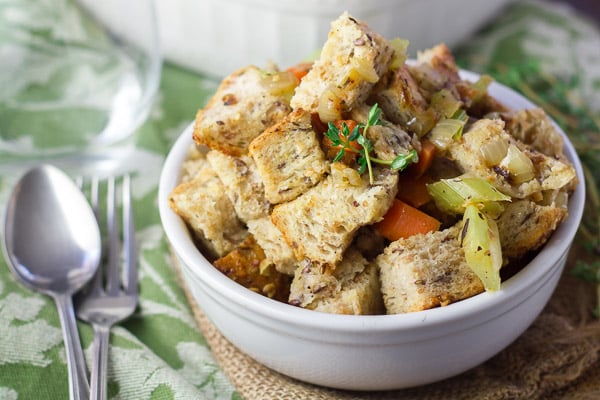 The best bread for this stuffing is a nice, big loaf of country white bread that you dice yourself. Sliced sandwich bread tends to be sliced too thin. It’s also best if the bread is a few days old and relatively dry. If it seems fresh and springy, toast the bread cubes for 5 minutes in a 325°F oven before proceeding with the recipe.