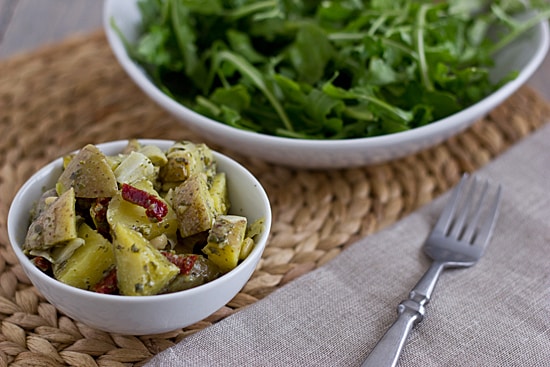 I used to think I hated potato salad. There were two potato salads that I knew of: vinegary German potato salad and the creamy potato salad made with mayo. Both were pretty gross to me. But then I found a potato salad recipe made with a dressing consisting of capers, lemon juice, and olive oil--not only was it delicious, but it made me expand my potato salad horizons. It didn't have to be creamy or vinegary! It could be other things!

I often make roasted potatoes and toss them with pesto, so I thought I'd try making a cold potato salad with some of the same ingredients--something I could have for lunch. This pesto potato salad recipe was completely improvised with things I had leftover from other recipes. Pesto, artichokes, sun-dried tomatoes, pine nuts--why not, right? Throw them all in! Although I used Yukon Gold potatoes, red potatoes or any kind of baby potatoes would work too. Go crazy!

Because I had arugula in the fridge, I added some to the potato salad just before serving--this way, the arugula won't get too soggy (which, like potato salad made with mayo, I also find gross). Like other potato salads, pesto potato salad is best served after being refrigerated for a few hours--this allows the flavors to come together a little more. 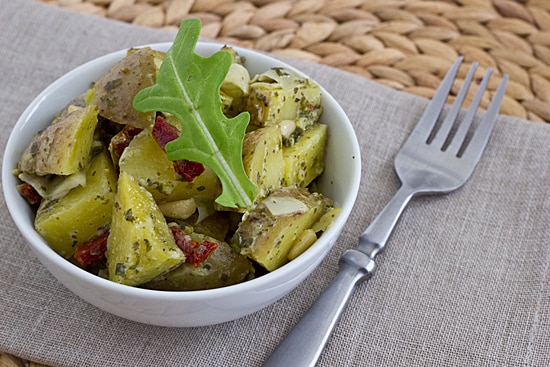