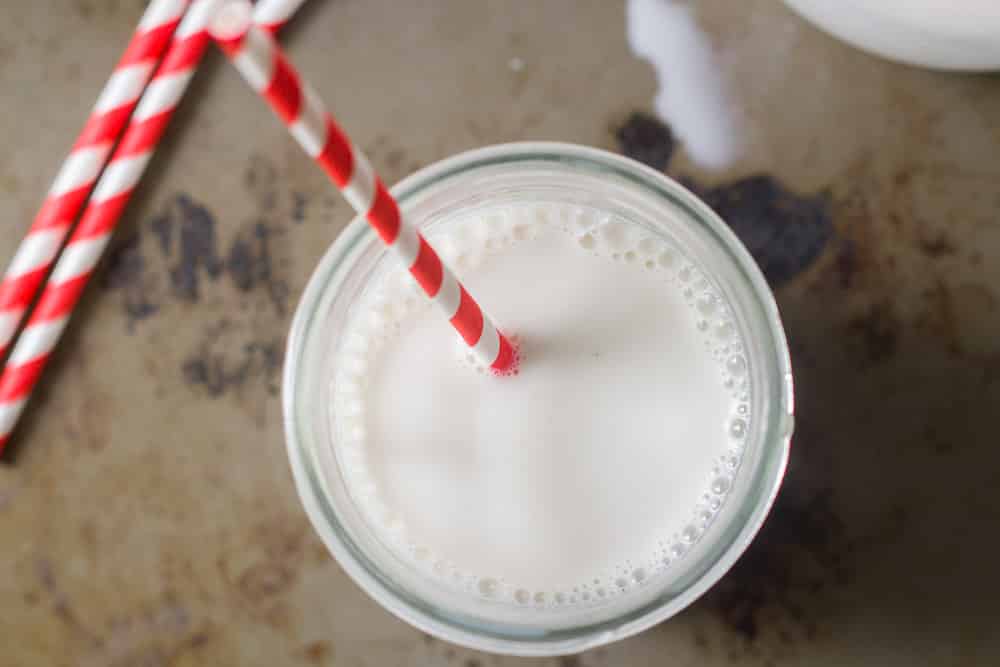 Shortly after I went vegetarian back at the age of thirteen my mom packed me up into the car and we made a trip to the health food store to figure out what on earth I was going to eat. Lots of vegetarian foods could only be found at the health food store back then! We left with some packs of tofu, frozen veggie burgers, and a carton of soy milk. I think I was the most nervous about the soy milk. It was back in a forgotten corner of the store and they only carried one brand, which leads me to believe soy milk was considered the weirdest of the weird health nut foods back in those days. Also, it was vanilla, and loaded with sugar. But it was the only soy milk they had, and I was determined to give it a try. 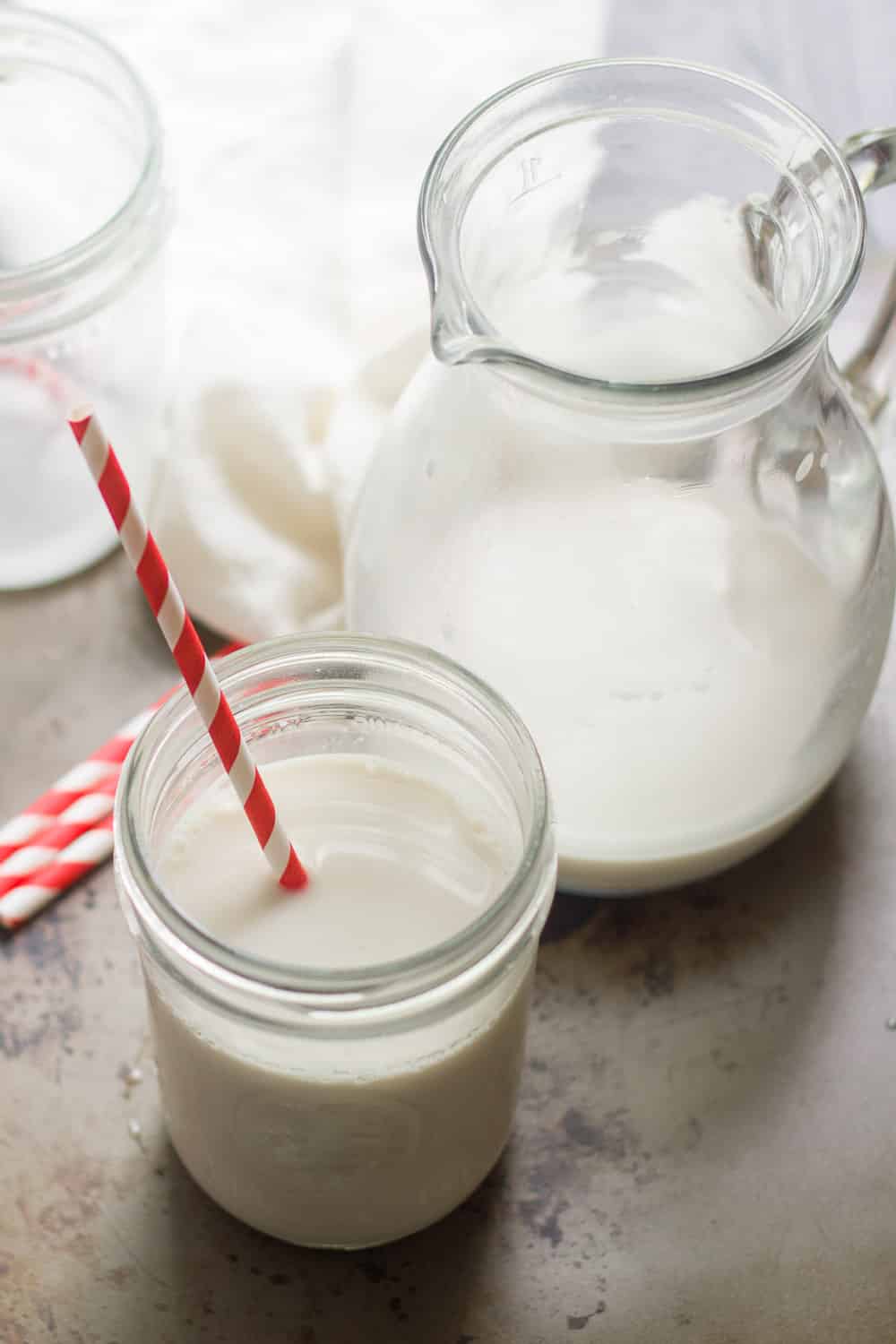 It blows my mind that my little suburban supermarket now has a good portion of an aisle devoted to all kinds of non-dairy milks. There's still soy (in multiple flavors, sweetened or unsweetened, thank you!) but also almond, hemp, oat, and maybe a half a dozen other non-dairy milks. It makes me kind of glad I had to get acquainted when the choices were limited — the current selection would have left my head spinning.

So where should you start if you're new to the world of non-dairy milks? I'm glad you asked! Here's the lowdown on a few of the most popular choices. For the most part they're all drinkable and can be used interchangeably in baking, but there are subtle differences you'll want to know about. 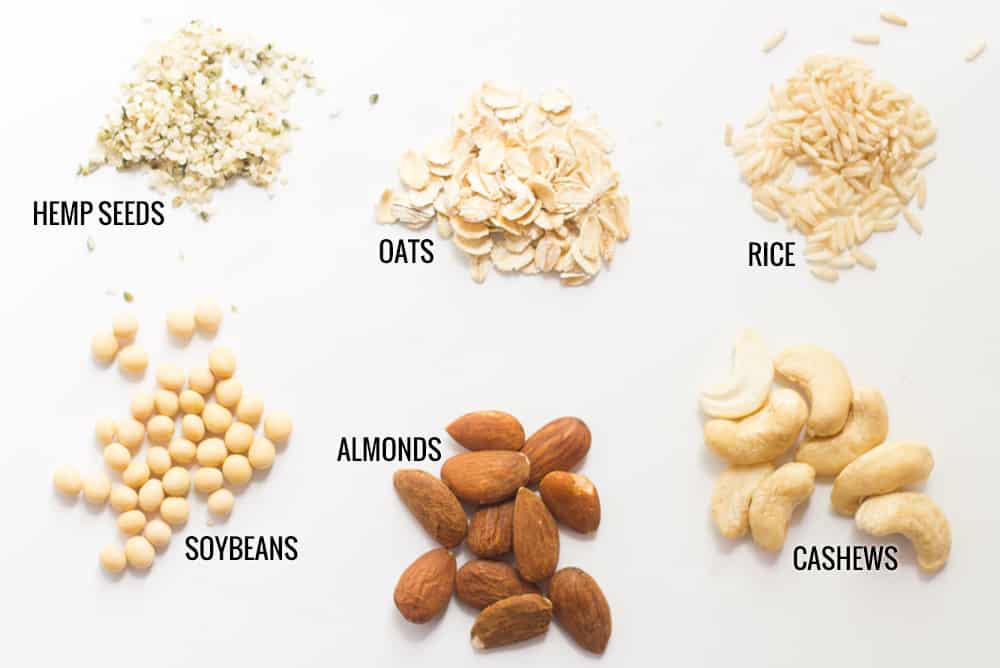 Soy is still my favorite non-dairy milk, though these days I buy it without added flavors or sweeteners. Plain soy milk has a nice creamy texture that's pretty close to dairy milk. The flavor can vary a bit from brand to brand. Some people find soy milk to have a bit of a metallic aftertaste, and some brands have a stronger aftertaste than others. You can usually find soy milk in both shelf-stable and refrigerated varieties, and I find the refrigerated types to have less metallic flavor.

What I really love about soy milk is the protein content. Most brands will give you around 6 to 8 grams per cup. This is great because it not only gives you a nutritional boost, but if you add a little acid like vinegar or lemon juice, you can get your soy milk to curdle, and curdled soy milk makes a great vegan substitute for ingredients like yogurt and buttermilk in baked goods.

Almond milk seems to be a popular favorite these days, and with good reason: it has a light and creamy texture and a mild flavor with a bit of a nutty undertone. It's highly drinkable and most people seem to enjoy the flavor, so it's a great all-purpose non-dairy milk to have around. Just like with soy milk, you can usually find almond milk in refrigerated and shelf-stable varieties. The refrigerated brands tend to be a bit thicker and closer in consistency to diary milk. But be sure to check the ingredients list when buying almond milk: you want a beverage that's thick and creamy due to the almond content, and not a bunch of additives. For the thickest and creamiest almond milk, make it yourself. The process is easy and DIY almond milk allows you to control the ratio of almonds to water and in turn the thickness.

Cashews blend up rich and creamy to make all kinds of vegan foods like mayonnaise, cheesecake, and cheese, so it's no surprise that they make an awesome non-dairy milk. Cashew milk is widely available in stores, but it's also probably the easiest non-dairy milk to make at home: just soak some cashews in water for 4 to 8 hours, drain, stick them in the blender with some more water, and blend. That's it! I like to use 1 part cashews to 3 parts water, but you can play around with the ratio to get the consistency to your liking.

Because cashews blend up so finely, there's no pulp to strain out like with almond milk. This means cashew milk is super rich and creamy. I find it to have the flavor closest to dairy milk — mild with just a bit of natural underlying sweetness.

Rice milk has a thin consistency with a slightly sweet flavor. I was never a big milk drinker to begin with, so some non-dairy milks can be a bit heavy for me to drink from a glass. Rice milk is light enough to suit my palate, and a bit more refreshing overall than the other varieties. While most types of non-dairy milk are thick enough to use as a light coffee creamer, rice milk is likely too thin. In baked goods it works interchangeably with other non-dairy milks.

Hemp milk is second only to cashew in terms of richness and creaminess. It also contains a good amount of the healthy fats you find in hemp seeds. I love the flavor and find it mild and and a bit grassy, but some people find it to have a bitter aftertaste. You'll have to try to find out for yourself. Chilling before drinking can help mitigate this. While hemp milk is easy to make at home (same process as almond milk), I don't recommend doing so unless you're planning on drinking it all right away — the shelf life is next to nothing! You should be able to use hemp milk in baked good recipes with no problem.

Oat milk is great for making in a pinch: it's cheap lots of us always have oats on hand! You can make it using the same basic process that we use for almond milk, just use oats instead! As far as the flavor, it tastes like, surprise...oats! Raw oats, in particular. If you've ever made overnight oatmeal you're familiar with the flavor, which is similar to oatmeal, but with an earthier, grainier undertone. Oat milk has a nice thick consistency with a bit of starchiness to it. The texture and flavor can take a bit of getting used to, which is why it's not my favorite for drinking, but you'll probably never notice these distinctions in baking.

So what can you use coconut milk in? I find it works best in curries and smoothies. You can also use it to make an amazing batch of dairy-free whipped cream.

Coconut milk is available at most supermarkets, usually in cans in the international foods section. You can usually find it in regular and light varieties, but even the light is heavy compared to other non-dairy milks, so the same rules I mentioned above apply. If you see something labeled as coconut milk in a carton, you can probably get away with using it in place of other non-dairy milks — these products are usually a blend of coconut and other milks, or just coconut milk that's been thinned out to have a lighter consistency.