Weekends call for a special breakfast. It can be so nice to slow down and make something that you can really savor--as opposed to my normal weekday routine of running out the door with a piece of toast in one hand and a cup of coffee in the other.

Growing up, biscuits were a treat made on Sunday mornings, so it seems only natural that they are still one of my favorite weekend breakfast options. And they become even better when you top them with a good helping of creamy gravy.

First, let's talk about the biscuits. Over the past few months, I’ve started using a lot more coconut oil in my kitchen. (I use this brand!) And after trying it in biscuits to replace the butter, I’m not sure I’ll ever go back.

Solid state coconut oil is cut into the flour just like you would do with butter, so there are still visible pieces throughout the mixture. The end result is a tender, delicious biscuit, that in this case is also studded with fresh rosemary to give it a great herb-y flavor.

The gravy is traditionally made with sausage, but this meatless version instead uses carrots and mushrooms, which bulk up the gravy nicely.

The mushrooms in particular really help give it that meaty, substantial texture you would find in a sausage gravy. More fresh rosemary and just a touch of vegan Worcestershire sauce increase the savory flavors in the mushroom gravy and mimic those found in the classic dish.

I tried a number of times to use coconut milk in the gravy portion of this recipe, but it just doesn’t smooth out quite like regular milk, and it separates from the olive oil.

So vegans may want to try another option. You can, however, absolutely use coconut milk in the biscuits- that works great! I also have a vegan biscuits and gravy recipe, which is a plant based version of this one.

If you love this recipe, be sure to check out these other delicious vegetarian gravy recipes too, and all my favorite breakfast ideas! 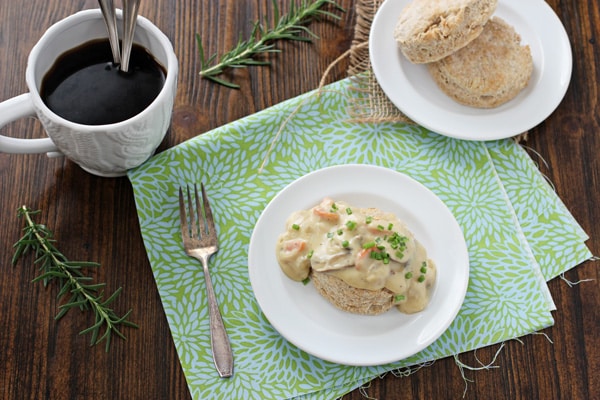