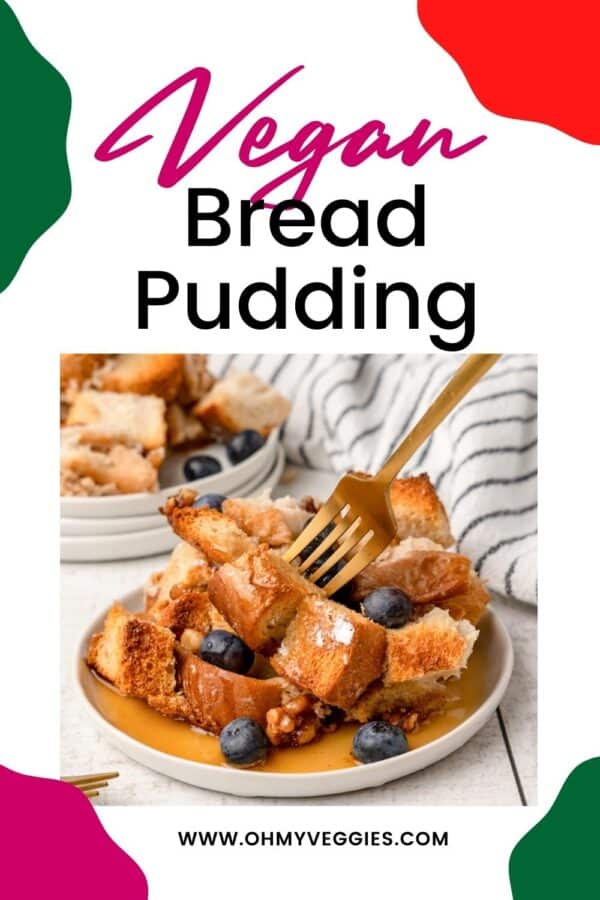 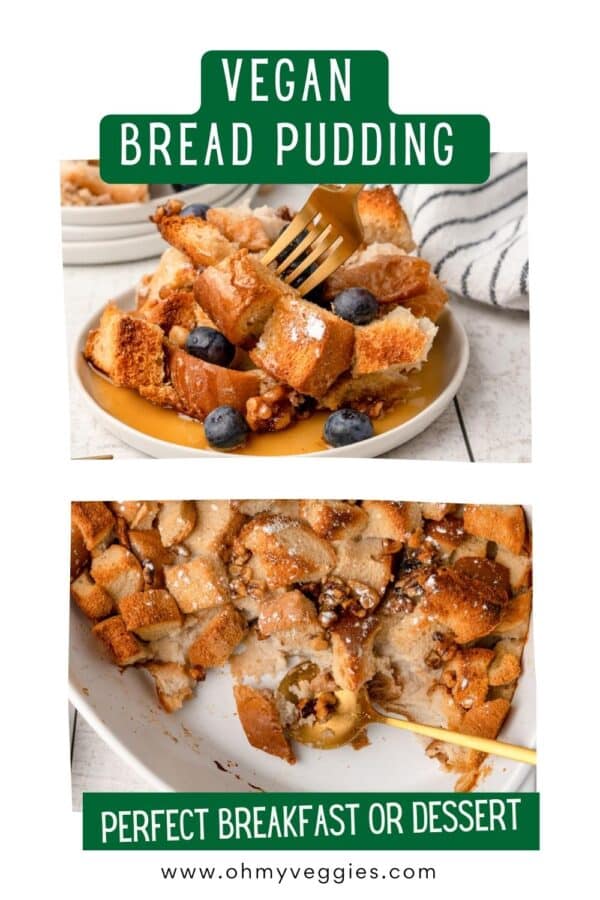 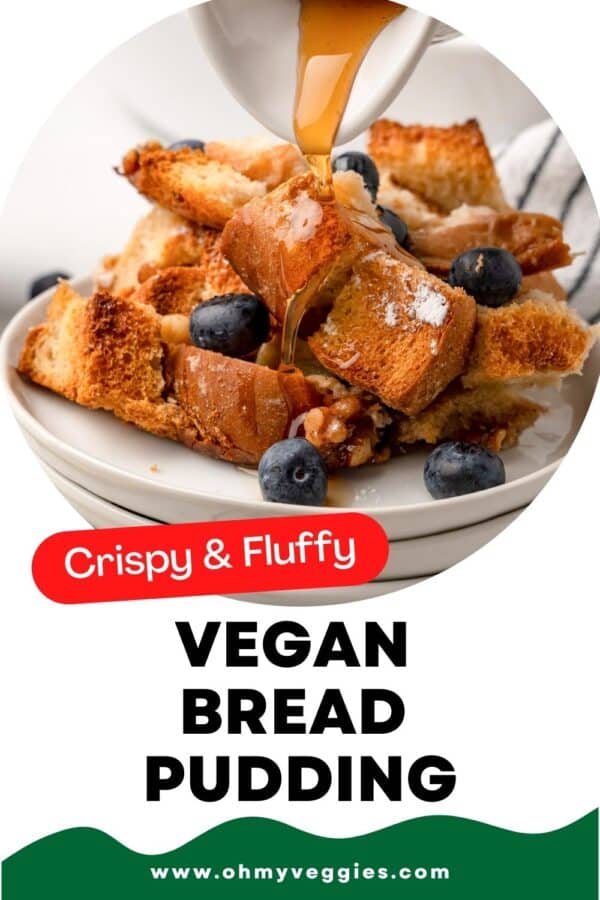 Vegan bread pudding is a rich and decadent bread pudding that is flavored with maple syrup, chopped walnuts and topped with powdered sugar and blueberries! A delicious breakfast or dessert to dish up.

Did you know you can make an eggless bread pudding? It is so easy to do, and you won't even miss eggs. A vegan recipe that is bursting with flavor.

We love to serve up bread pudding at Christmas time, but also for a treat through the year. Make sure to check out my chocolate chip bread pudding recipe as well. It is great for those who love chocolate.

This Vegan Bread Pudding Recipe Is..

How to Make Vegan Bread Pudding

I used a 9x13 baking dish for this recipe. You are welcome to half the recipe if you don't want to make as much. If you do so then reach for an 8x8 or 9x9 pan.

When you go to pour the almond milk mixture make sure to evenly pour all over the bread. Otherwise it will dry the bread out as it bakes in the oven. It won't have the soft texture you want it to.

Instead of a plain bread do something like a cinnamon or cinnamon raisin bread. It will add tons of flavor to the bread pudding.

Add a splash of cinnamon into the almond milk mixture. I do around ½ teaspoon and it gives it a warm spice flavor. If you are around fall do pumpkin spice seasoning.

Instead of walnuts do slivered almonds or even pecans. It will still give you a crunch factor but a change of flavor. Or if you don't like nuts you can leave them out.

Consider adding some fruit in with the bread to add a fruity flavor to the bread pudding. Any fruit works, just cut into bite size pieces if it is like apples or strawberries.

What is vegan pudding made of?

This vegan pudding is made with almond milk, vegan bread, and a few other ingredients. Just make sure that all your ingredients are vegan friendly when making bread pudding.

How to store bread pudding?

Bread pudding needs to be stored in the refrigerator in an airtight container. You will find the pudding will last for 4-5 days. Just slice and eat cold or warm it up in the microwave. Or heat in the oven until warmed through.

Can you freeze bread pudding?

Yes. You can freeze any bread pudding you don't plan to eat right away. Simply place in a freezer container and freeze 2-3 months. Then thaw in the fridge overnight. Or defrost in the oven and heat until warmed through. 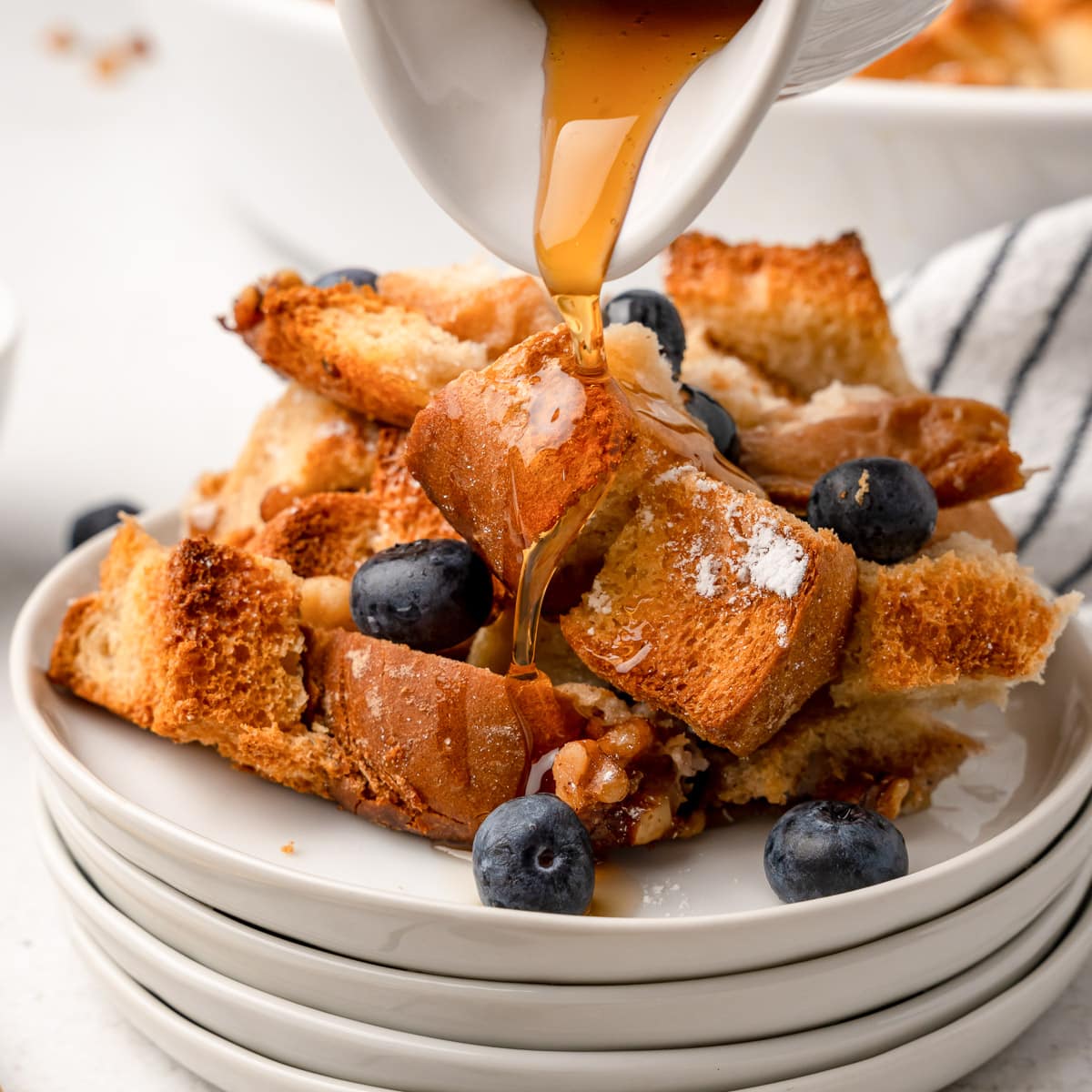