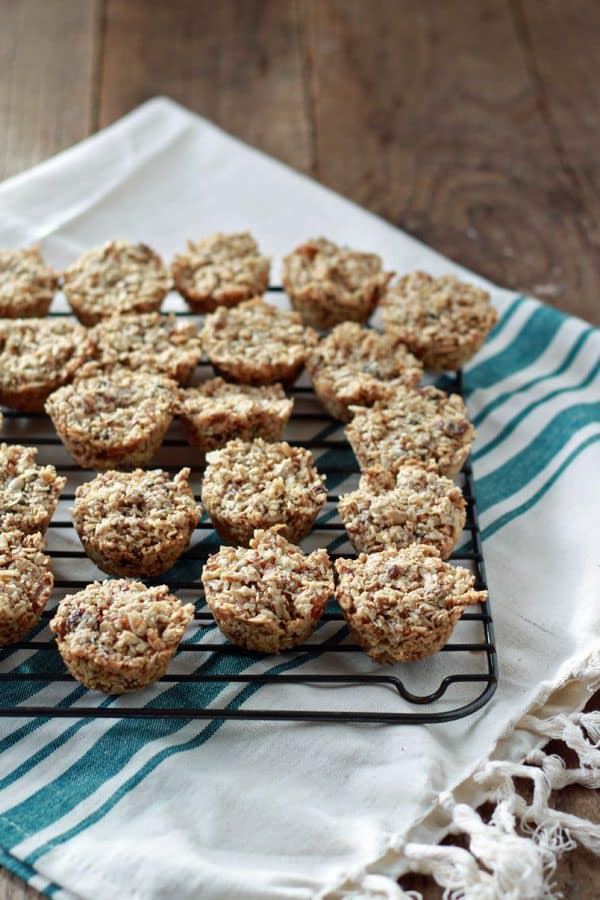 Have you heard of Aussie Bites? They're sort of a cross between a mini muffin and a cookie. With a serious dose of granola bar thrown into the mix. They're a bit sweet, a tad salty, a little crunchy, and oh-so very delicious.

They boast a nice, healthy dose of Omega-3s and fiber, and they also make an incredible grab-and-go breakfast or healthy vegan snack. Basically, they rock.

I've only ever seen them on the shelves at Costco, but after becoming a bit addicted to the store-bought version, I set out to make my own. I checked the list of ingredients: Rolled oats. Butter. Flaxseeds. Coconut. Dried apricots. Raisins, honey, sunflower seeds... I could do this.

I wanted my version to be as healthy as possible, so I swapped the butter for coconut oil. And to keep them vegan, I opted for maple syrup instead of honey.

It took a handful of tries to get these right, but the recipe I settled upon has been a hit among my official taste panel (that would be, um, my toddler, my husband, my sister, my friend, and myself).

This recipe results in about four dozen Aussie bites, so if that's a bit much at one time, just freeze the extras.

Seal them in a zipper bag, put 'em in the freezer, and then pull a couple out and set them on the counter while you're starting your morning coffee. They'll be pretty well thawed and ready to go after just a few minutes.

* To make oat flour using rolled oats, just pulverize approximately 2 cups of oats in a food processor until it reaches the consistency of flour, and then measure 1 ½ cups of the flour for the recipe.
** This recipe yields about 48, and I only have a 24-cup mini-muffin pan, so I bake in two separate batches with no issues. I have also made this recipe using a 4-cup mini food processor instead of a large food processor. I just pulse the items that need chopping or pulverizing as I go, mixing ingredients together in one large bowl.