Are you suffering from post-holiday food hangover? This Christmas, I didn't eat as much junk food as I usually do, but I'm still feeling fairly sickened at the mere thought of anything chocolatey or cheesy.

I just can't with rich foods right now. Just! Can't! All I want are vegetables and greens and grains.

And this stew? Has plenty of these things. It's the perfect antidote to post-holiday food hangover.

This was inspired by a recipe in Whole Living, which I planned on making without any substitutions aside from omitting the chicken. But as I went through the grocery store, slowly I started making more adjustments in my head.

Butternut squash is lower in calories than sweet potatoes--into the cart it went! I like kale more than collard greens--that went into the cart too.

Instead of leaving the chicken out, what about replacing it with seitan? That sounded like a good idea, so I grabbed a package of that.

And because I didn't have brown rice in the pantry, I decided that rather than buying more, I'd use bulgur.

The result is a stew that is both super healthy and, shock-of-shocks(!) substantive too. This is the kind of meal that keeps you full for a few hours. Not an icky full, mind you.

A good, satisfied kind of full. Which is the kind of full you need when you're trying to detox from Christmas. 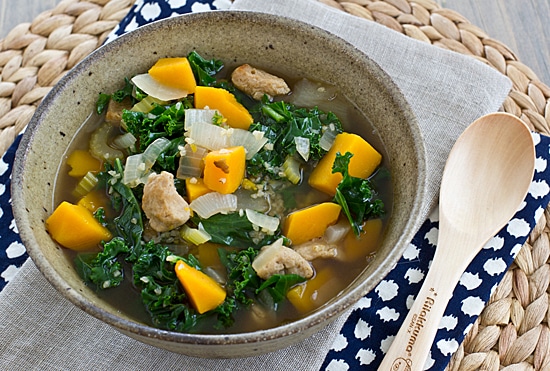