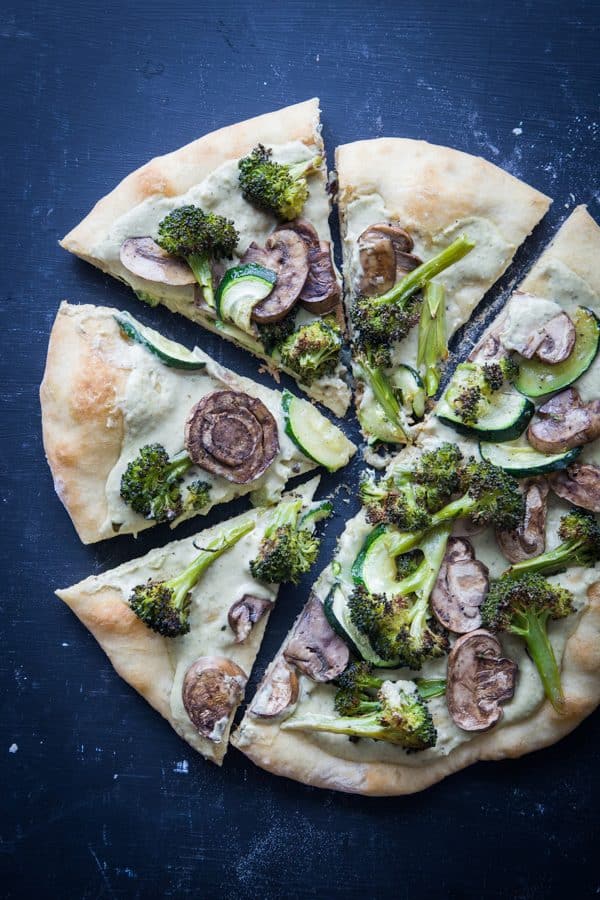 This vegan hummus pizza is flavorful and hearty, with a layer of creamy white bean pesto hummus topped with roasted broccoli, mushrooms and zucchini. It's as easy to make as it is healthy, and takes just 30 minutes to prepare.

We're just one week into the New Year and here I am sharing a pizza recipe. It seems like most people, myself included, are looking to take our diets in a healthier direction this time of year, and I usually don’t think of pizza as being healthy.

But this pizza is another story. It’s probably the healthiest pizza I’ve ever made, loaded with veggies and totally vegan. It’s also over-the-top delicious.

I’ve created a few vegan pizzas at this point, and I think I’ve figured out the key, which is really the same rule I apply when veganizing any recipe: if you can’t create a vegan version of something that’s as tasty as the original and relatively easy to create, don’t even try.

Most pizza is covered with a layer of mozzarella cheese. Melty, stretchy cheese is not among those easy to replicate vegan foods. It can be done, but you might devote a good portion of your day to it.

Whenever this is the case, I simply go with plan B, which is to find a replacement that’s relatively easy to make, and at least as delicious as the original.

In this case hummus was that ingredient. I’ve seen hummus used in pizza recipes a few times, and at first I thought it sounded a little weird. It was actually perfect though.

The awesome thing about hummus is that it functions like cheese and sauce. It adds richness, flavor and bulk like cheese, while providing a nice base layer over your crust like sauce does. White bean hummus works especially well for this, since it blends up nice and creamy.

This hummus pizza was also the easiest pizza I’ve ever made. Everything happens simultaneously -- the crust bakes and veggies roast while you blend up the white bean pesto hummus, which is extra easy to whip up given the fact that most of the flavors are already conveniently packed into the pesto.

You can use store bought or homemade prepared pesto, but keep in mind that most store bought pesto brands contain Parmesan cheese, so they’re not vegan. Amore is one brand that's available in lots of supermarkets and online. You could also make your own.

And if you're up for making your own pizza dough, I'm a fan of this vegan pizza dough too. 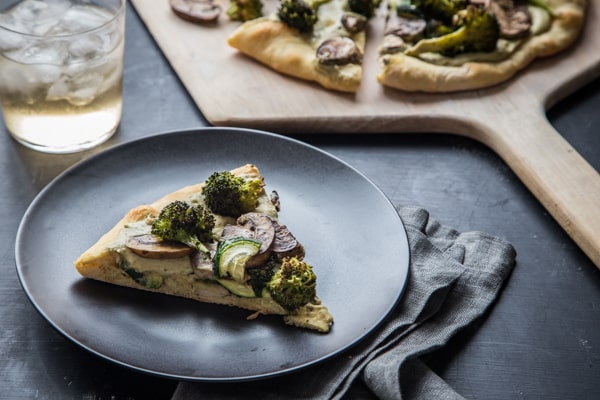 For the White Bean Pesto Hummus:

Prepare the Roasted Vegetables and Crust:

Feel free to substitute your favorite veggies. Bell peppers, diced eggplant, and artichoke hearts would all be delicious here. You will need a total of 6 cups of whatever veggies you choose.