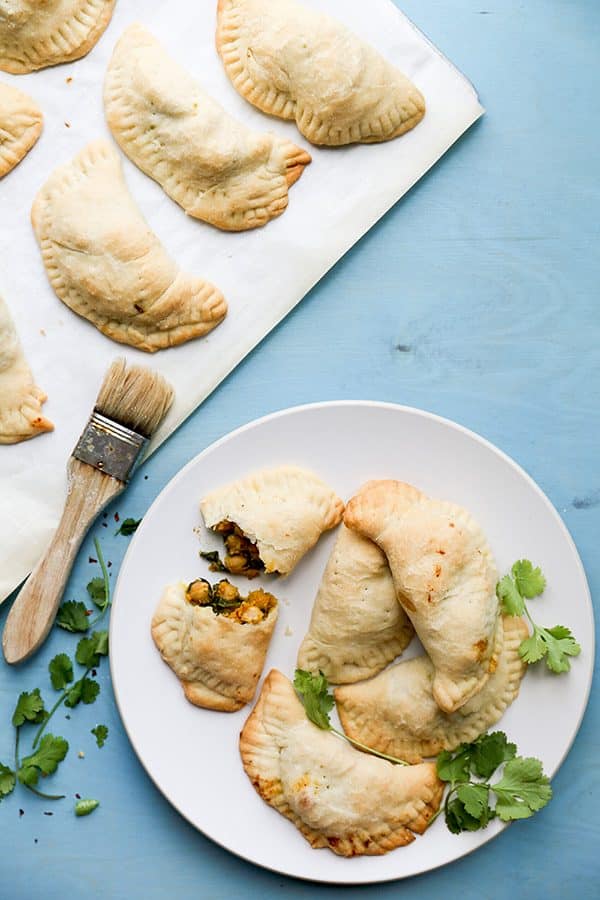 These vegan empanadas are packed with healthy flavor from fresh spinach, sweet potatoes, and coconut curried chickpeas, all wrapped up in a flaky crust. What's not to love?

With the Super Bowl right around the corner, I’ve got game day snacks on my mind. In fact, I’d say the snack table is probably the ONLY thing I’m thinking about with regards to organized sports.

Admittedly, I could care less about the actual game. Instead, you’ll usually find me lurking around the food and beverages, blissfully munching and sipping my way through the minutes of the game.

Maybe looking up at the television once or twice if other people in the room seem to be particularly aroused by a certain play or commercial. It’s just never been my cup of tea.

Game day snacking can be challenging if you have any kind of dietary restriction(s). Or if you’re simply trying to eat a bit healthier. There is usually a lot of heavy, fried foods involved.

Not that I’m complaining, per se. But it’s certainly nice to have options. So that’s why I created these vegan empanadas.

And now I’d like to formally declare here that empanadas may just be the ultimate game day snack.

No plates or silverware are required to consume these cute little hand pies. And they are surprisingly hearty and satisfying. Even those with the biggest of appetites will totally dig these empanadas!

To make them vegan, I adapted this recipe and used a combination of light coconut milk (make sure to buy the canned stuff and whisk it well before using it in recipes!) and coconut oil for the dough.

Personally, I love how well coconut and curry play together in savory applications.

Filling, folding and shaping the empanadas can take a couple of tries to get the hang of, but it’s not a particularly hard process. Don’t overly concern yourself with trying to make them perfect.

I think their somewhat rustic appearance is all part of the charm! And try to resist the urge to overfill them, so the filling doesn’t spill out everywhere.

If you’re having trouble folding the empanadas and making a firm seal, then you’ve probably added too much filling to the center. 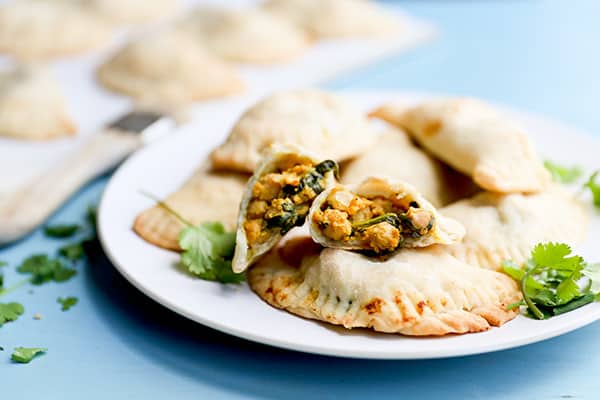