Vegan borscht - a healthy plantbased version of a comforting beetroot soup that’s popular in Eastern Europe. It is super wholesome thanks to the addition of potatoes and butter beans, as well as packed full of vegetables and flavour. This gluten-free and oil-free soup is perfect for a cosy, quick weeknight dinner. 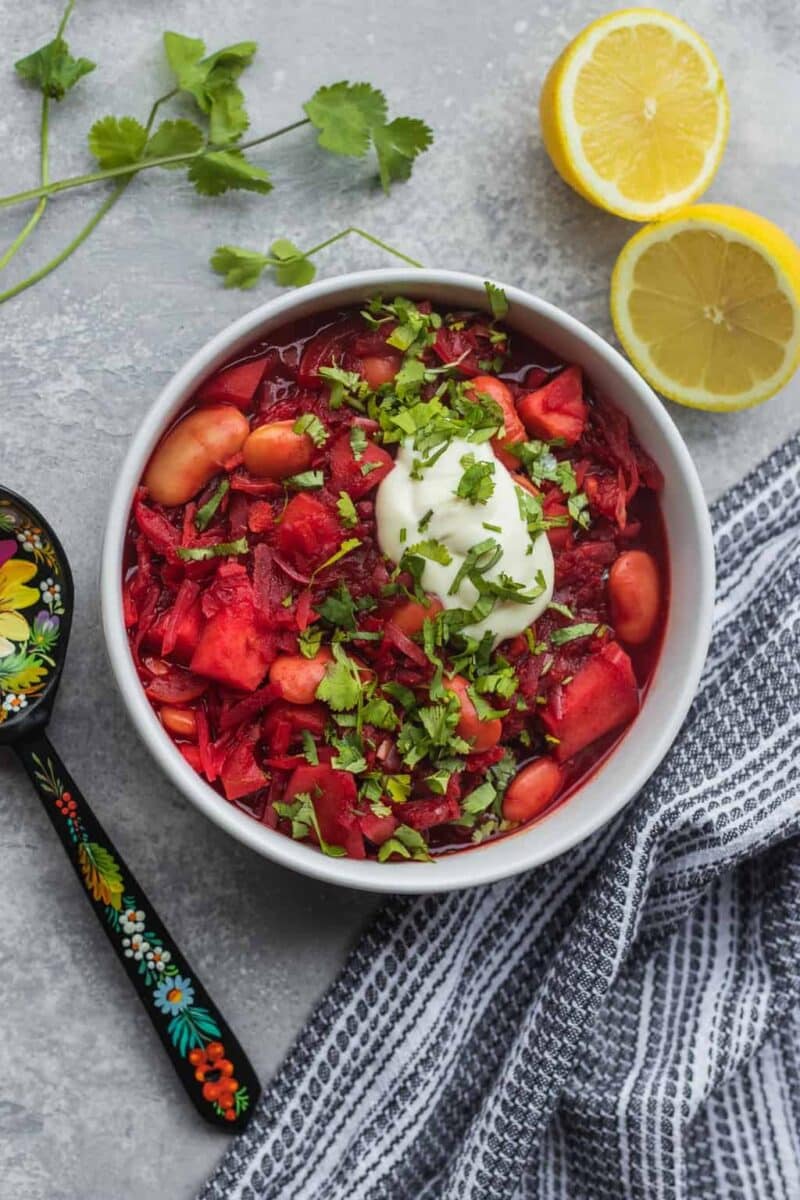 One of my favourite things about winter is eating a lot of comfort food, and comfort food season certainly doesn’t end with Christmas and New Year’s Eve. And one of my favourite comfort foods happens to be soup. I just love the feeling of preparing a comforting dinner when it’s dark and cold outside, or even a cosy lunch in the middle of the day. (Although, my love for smoothie bowls is too strong and sometimes I’ll still have one for a morning snack lol).

I've shared quite a few soup recipes on this blog already, and the great thing is that there are so many ideas that require just simple, plantbased ingredients.  But today, I'm sharing an old favourite. That old favourite is vegan borscht, a soup I ate all the time when I lived in Russia. 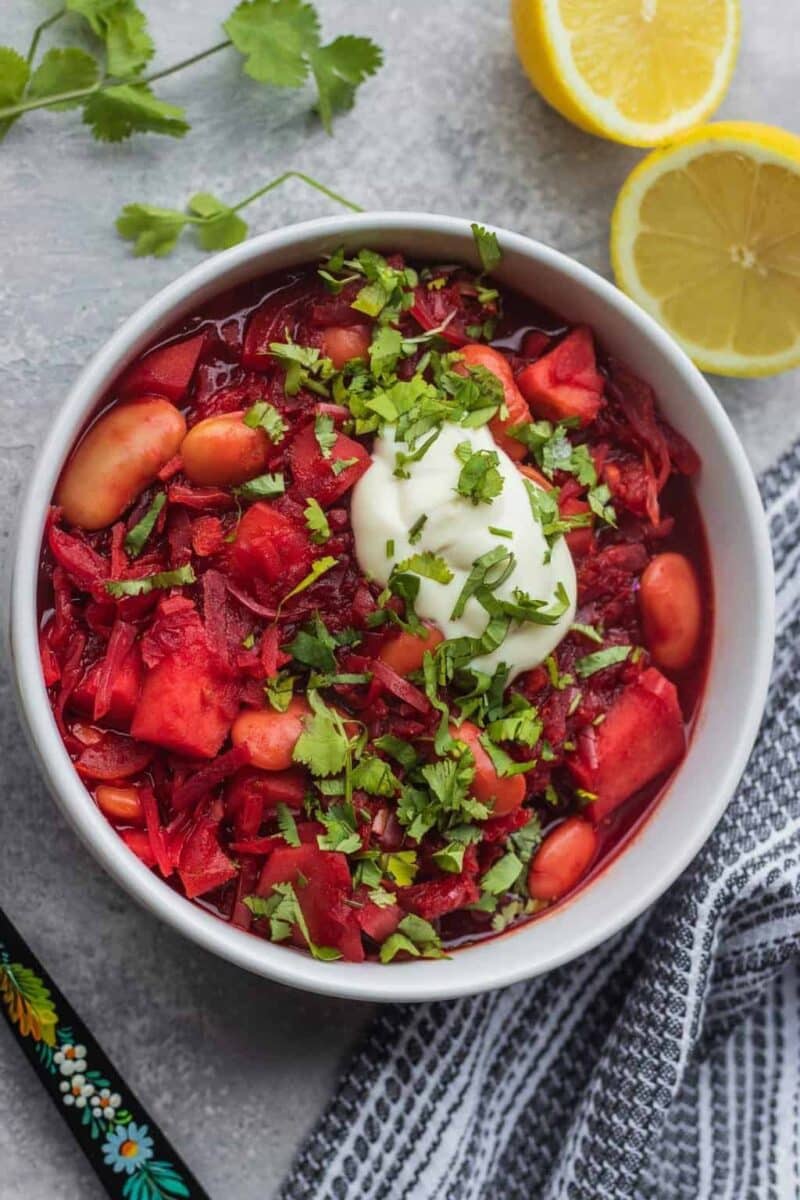 About this vegan borscht

If you’ve never heard of borscht before, it’s basically beetroot and vegetable soup that’s very popular in Russia and other Eastern European counties. It also happens to be quite popular here in the UK. Even people who think they don't like beets often fall in love with it! 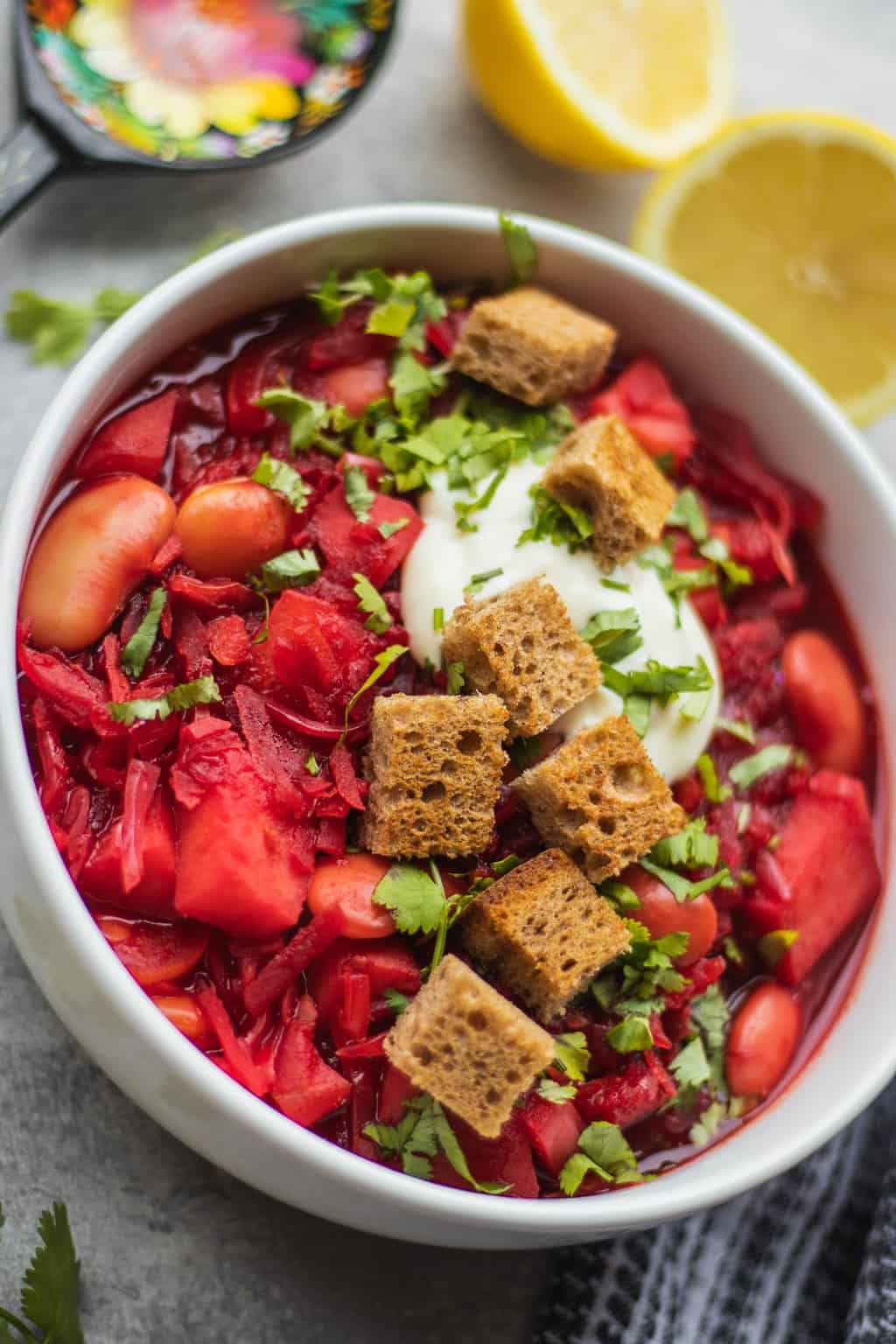 Something I love doing is veganising recipes that used to be my favourite back in the day (I can’t believe I just said back in the day lol sometimes I speak as if I’m 90 years old). And because I ate borscht all the time, I thought it would be a great idea to not only bring the recipe back into my life, but also share it on here.

Borscht is often vegan as it is, so veganising this didn't involve that much work. Sometimes it’s made with meat, but the basic soup only uses plant based ingredients. It’s very common to serve it with sour cream, but you can easily replace that with either vegan soured cream or just some soy yoghurt. 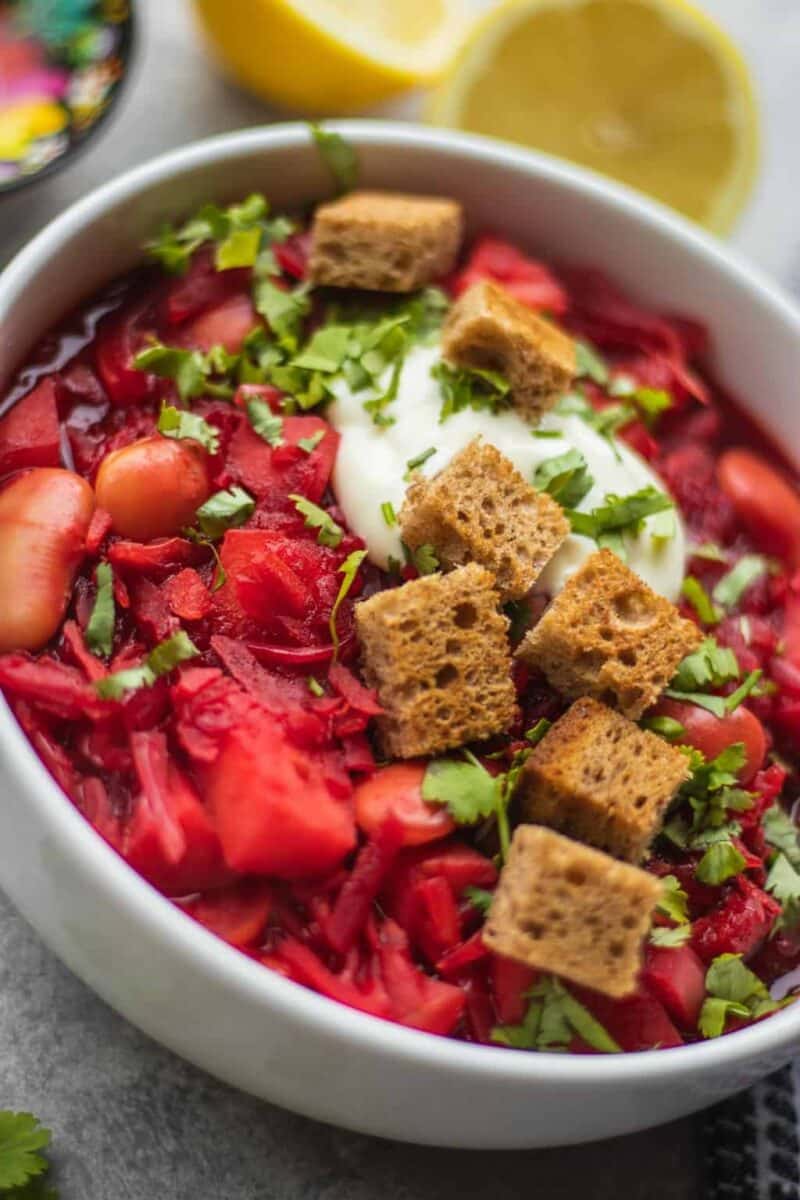 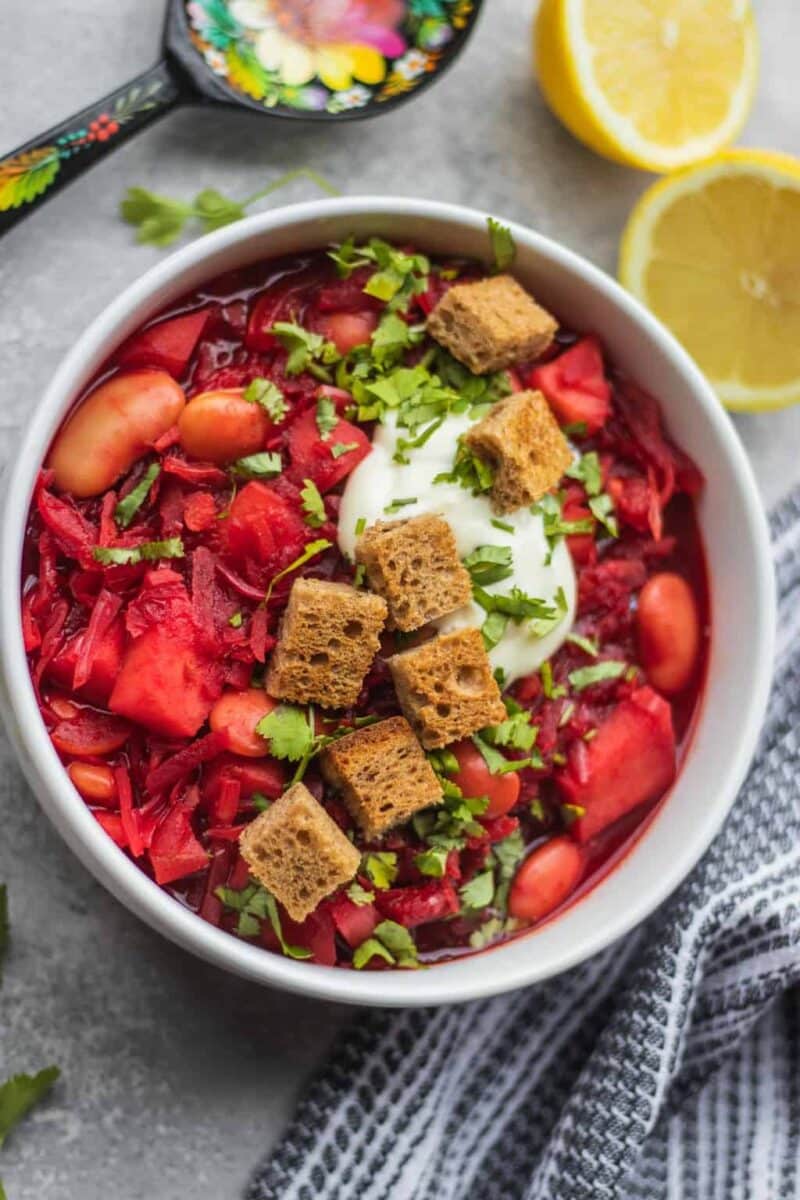 Even if you think you don’t like beets, I encourage you to give this vegan borscht a chance. Plenty of my friends who are neither vegan nor beetroot fans love this recipe. Together with the other vegetables, it adds a lot of flavour without being overpowering. I also added potatoes and beans, so it’s not the type of soup that leaves you still feeling hungry afterwards.

I love this vegan borscht because it’s 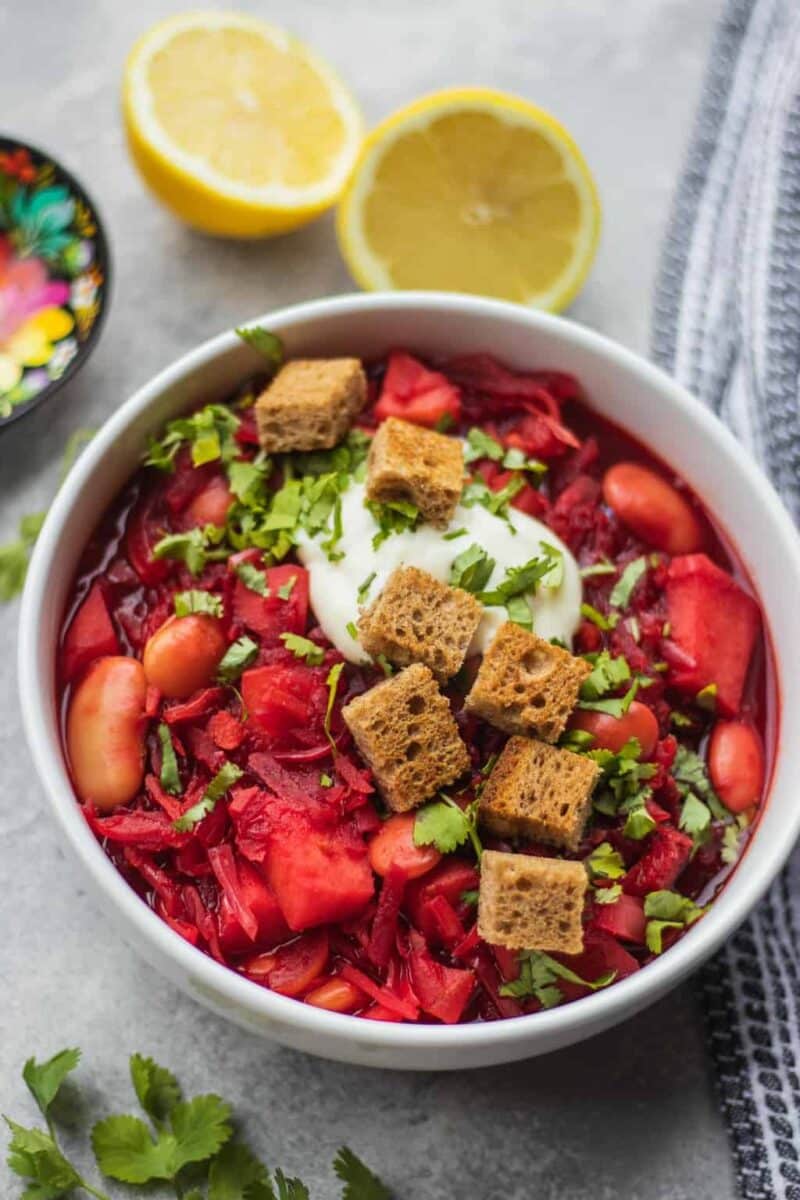 Instructions for the best borscht ever

It really is super easy!

Start by cooking potatoes and cabbage in veggie broth on a low medium heat. Meanwhile, add onion to a non-stick frying pan and cook for 2-3 minutes, until fragrant. Then, add the carrot and beetroot, stirring for a few minutes, before adding the tomatoes, tomato paste, paprika, onion granules, cumin and garlic.

Cook the vegetables for around 5 more minutes, stirring frequently. Then, add to the saucepan with the potatoes and cabbage, and simmer for around 15 minutes. 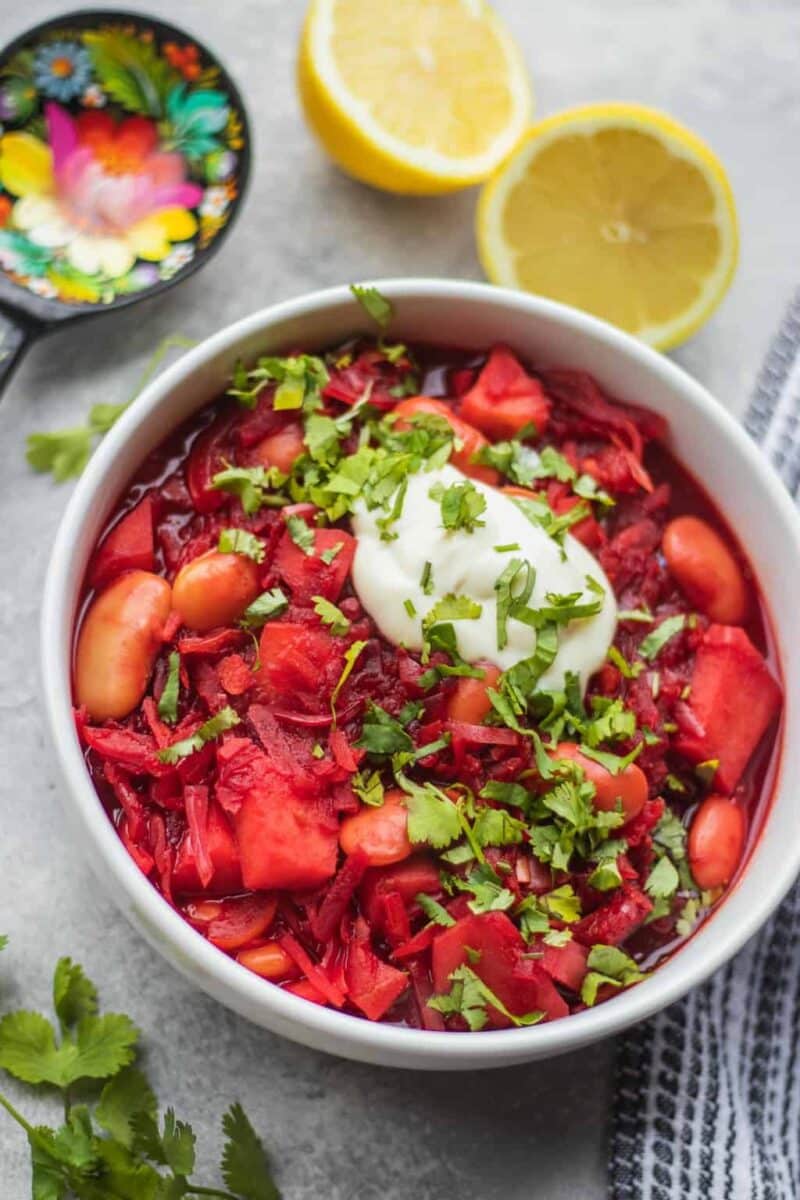 What can I add to this vegan borscht?

Let me know in the comments - what's your favourite soup? If you give this vegan borscht recipe a go, be sure to tag me on Instagram (@earthofmariaa) so I can see your creations, and leave your feedback in the comments below! 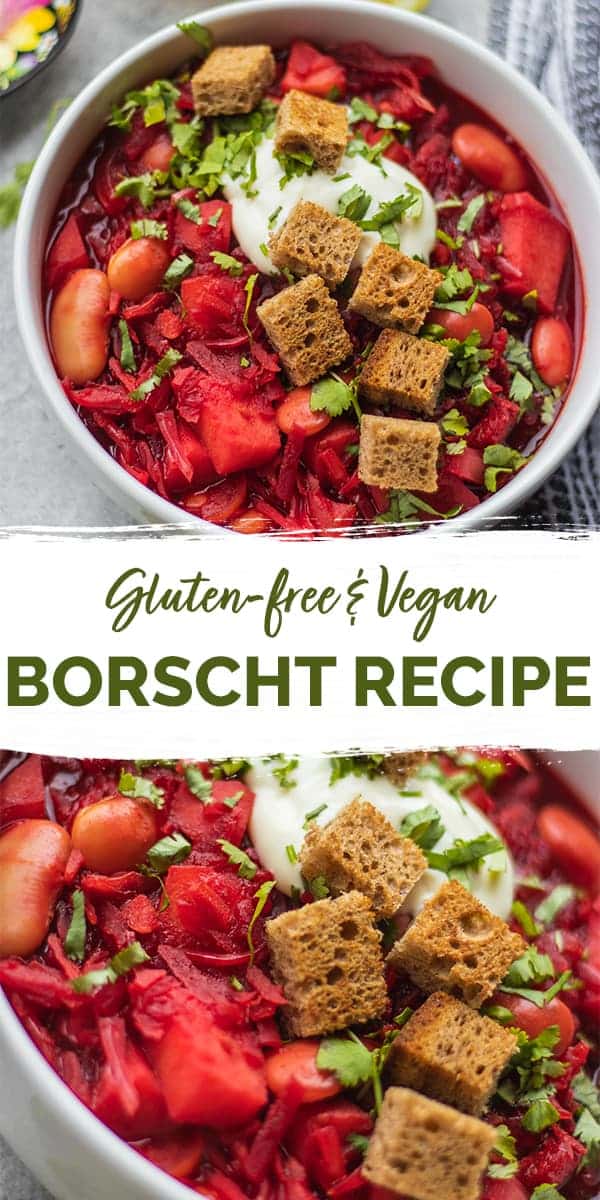 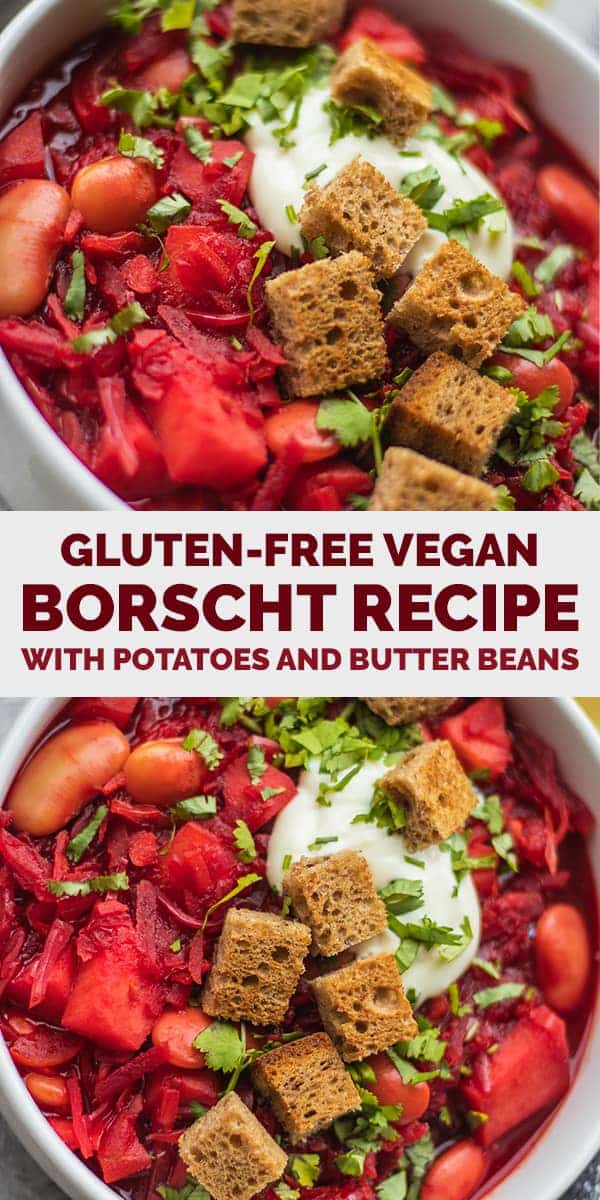