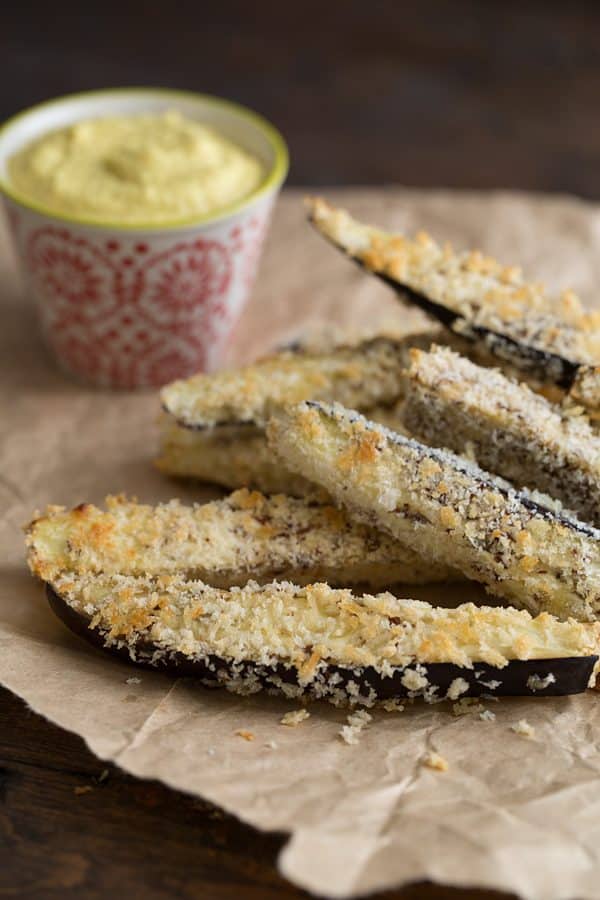 These eggplant fries are perfectly crispy on the outside, tender on the inside, and delicious dipped in a homemade curried cashew aioli. And they couldn't be easier to make!

These Panko-Crusted Eggplant Fries are one of my favorite ways to enjoy eggplant. They make a great appetizer or snack. But honestly, I'm guilty of just eating the whole batch for dinner.

These eggplant fries are:

I used baby eggplant because I find smaller eggplants to be less bitter, so I can cut out the step of salting them. Older eggplant can be bitter too, so buy local if you can because it's spent less time traveling to your grocery store.

It would be a travesty to serve delicious, crispy eggplant fries without a sauce, so I whipped up a Curried Cashew Aioli for dipping. It's kind of the same idea of my Cashew Mayo , except with a heaping teaspoon of sweet curry powder added to it.

If you don't want to bother with the dipping sauce, jarred marinara sauce works too.

Can we talk about the miracle of flax eggs? You might not be able to whip them into an omelet or use them in a quiche, but I've been experimenting with them a lot in vegan baking lately and they work really well. Better than I expected, even.

I rarely have eggs on hand because we just don't eat them very often, so now when I bake something, I usually make it vegan by substituting ground flax and water for the eggs, almond or coconut milk for the dairy milk, and coconut oil for the butter.

Unlike traditional baking ingredients, which I'd have to add to my shopping list, these are all things that I always have on hand nearly all the time - which I guess might be a bad thing because that means I'm eating a lot more baked goods! 😉

So how does flax work as an egg substitute? It's magic! Okay, I'm lying, it's not magic.

I don't really know exactly how it works. But when you whisk ground flax seeds with water and let the mixture sit for a few minutes, it gels up and feels a little bit eggy.

It's not quite as strong when it comes to binding ingredients together, and it can't be substituted for eggs in every recipe (like the aforementioned omelets), but it's a nice, natural way to replace eggs in a lot of different dishes. 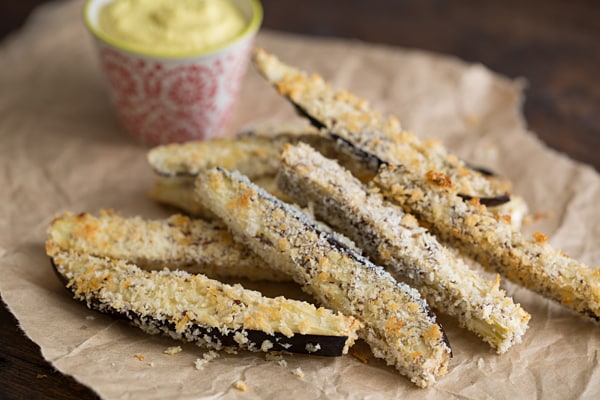 I don't like wasting breadcrumbs, so one cup of panko is the exact amount I used for this recipe—you might need a little bit more, depending on the size of your eggplant. If the flax mixture dries up, add another tablespoon of warm water, give it a good whisking, and let it sit for a minute or two until it gels up again.