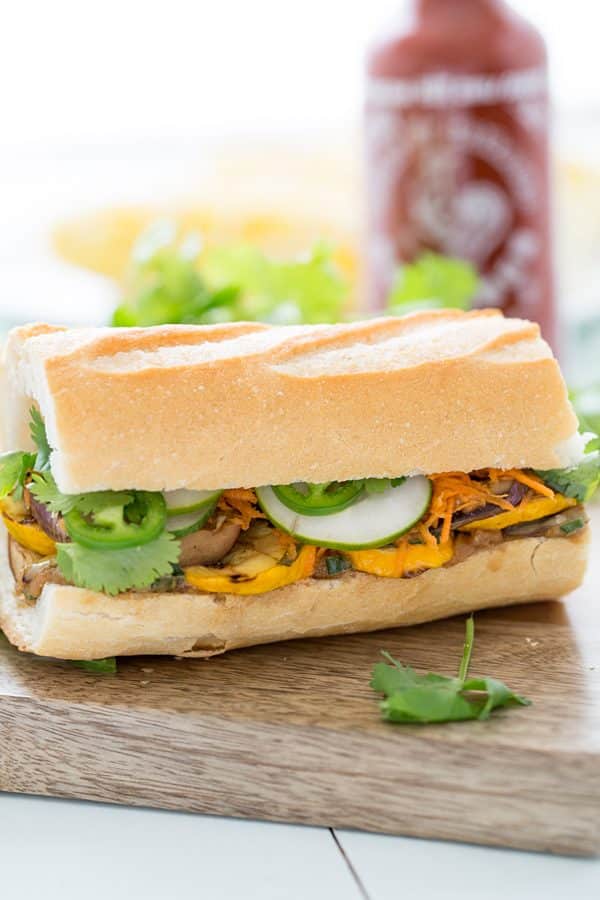 These Veggie Banh Mi sandwiches are loaded with flavor from grilled marinated summer vegetables. They're hearty, delicious, and you won't believe how simple they are to make!

Most vegetarian or vegan banh mi sandwich recipes use tofu, but this one is different! It's a Grilled Veggie Banh Mi, made with marinated summer vegetables.

These banh mi sandwiches are:

This weekend I went to check on my garden and all the squash plants were limp, brown, and crispy. Curse you, vine borers!

I was pretty much expecting it to happen though, because a) it happens every year, and b) I had my first actual encounter with vine borers this summer, which I enumerated in detail here and then deleted because maybe writing in gory detail about vine borers isn't the best way to start a recipe post? Maybe?

But that's okay because the farmers market is full of crazy summer squash right now. And crazy eggplant! Crazy peppers! Crazy everything!

As you might have noticed, I'm a sucker for offbeat and heirloom veggies, so whenever we go to the farmers market, I stock up.

I can't really say that yellow zucchini tastes any different than the green kind, but hey, it's yellow! Yellow!

If you make this Grilled Veggie Banh Mi sandwich (oh, and you should, because it's delicious), you can use any veggies you like for it.

I used 3 little round speckled eggplant and a skinny white one, the aforementioned yellow zucchini, and a purple bell pepper. But anything works, just as long as it adds up to 1 ¼ pounds.

In addition to using a variety of veggies, I also added the extra step of marinating the veggies for a bit, to add a lot more flavor!

Tofu is good, but I am not a fan of mayo! (Unless it's cashew mayo, of course.) The spread is kind of like peanut sauce in flavor, but it's less saucy. (But if you do want peanut sauce on a sandwich, I have one like that too!)

We served these vegetarian banh mi sandwiches with corn-on-the-cob and thick slices of Sugar Baby watermelon. I can't think of a better dinner for a hot August day. (Even if I didn't grow the veggies myself!) 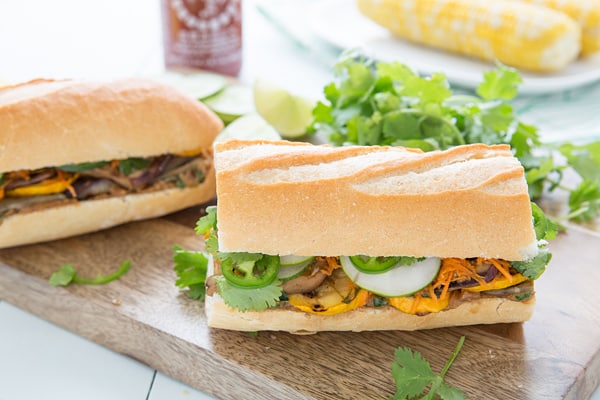