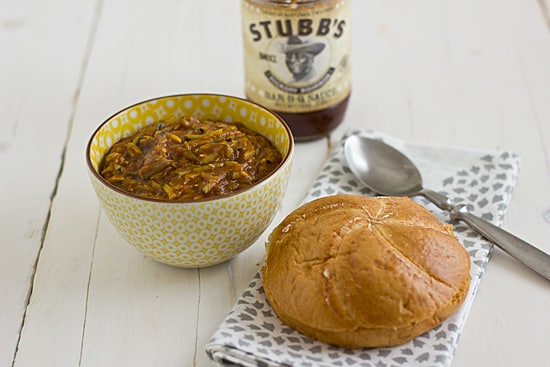 A vegetarian version of pulled pork, the filling in this Bourbon Mango Pulled Summer Squash Sandwiches recipe is also great as a side dish.

Most of my worst ideas come to me in the middle of the night. The cats will wake me up or something else will startle me out of my sleep, and suddenly I'm thinking that I should really just quit my job and sell macaroons for a living. Or that it would be a good idea to pepper my thesis with hair metal lyrics just to see if my advisor notices. (Yes, these are real ideas that I had—and in the hours between midnight and 7am, somehow those ideas seemed really good.) The idea for this recipe popped into my head during one of these times—vegetarian pulled pork sandwiches! 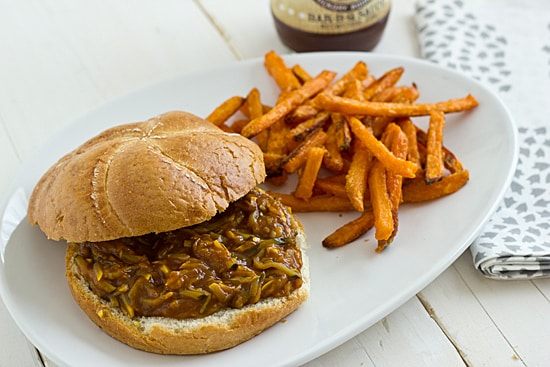 When I woke up the next morning, I had to figure out a way to execute this idea. I thought that seitan would be a good substitute for pork, but I realized that they don't sell it at our local grocery store and it hardly seemed worth it to drive to Raleigh just for that. So somehow the seitan became julienned summer squash. I found a recipe for Bourbon-Mango Pulled Pork that piqued my interest, so I adapted that using yellow squash and zucchini instead of pork to make Bourbon Mango Summer Squash Sandwiches. I was unsure of how this would turn out and as I made it, I started feeling more and more like this idea should have been shelved, like the macaroons and hair metal lyrics in my thesis. Luckily, apart from the end result being a little on the spicy side, this worked out just as I had hoped. It would make a great side dish too or, if you're feeling really adventurous, burger topping.

I've reduced the amount of chipotle powder in this recipe. I made it with ½ teaspoon more and it was a little much for me. If you like a lot of heat, add ½ teaspoon to the sauce instead of ¼. 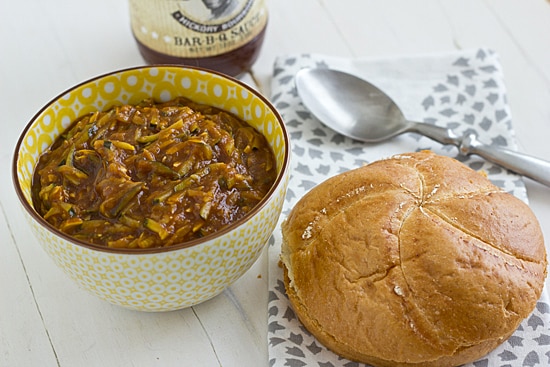