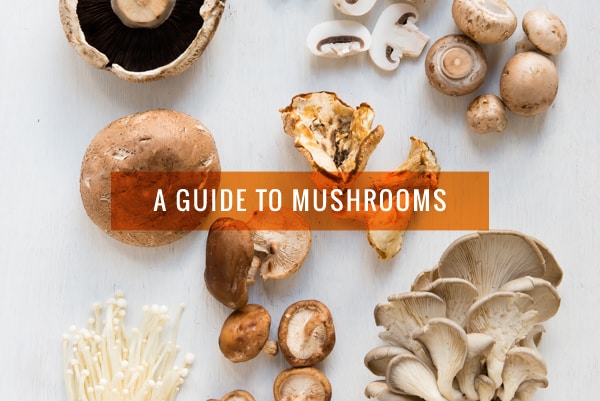 Mushrooms are a wonderful thing and, with so many varieties out there, it might be hard to know which ones to use. There are certainly mushroom aficionados out there who forage the forest floors. (Jealous!) But for most of us, we are limited to the varieties found in grocery stores and local markets. 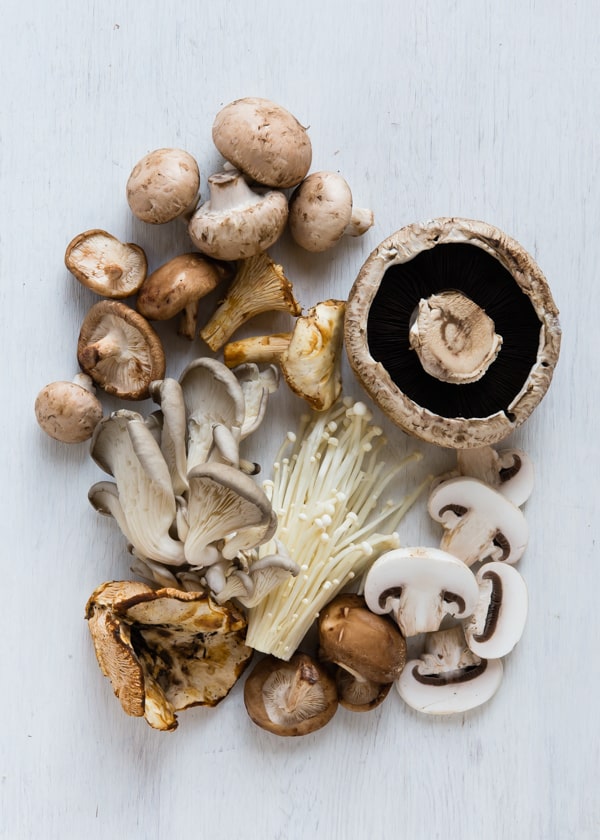 What's so special about mushrooms?

Mushrooms belong to the Fungi family. They are comprised of a stalk and cap with gills or spores. (Remember that from grade school science class?) The cap is sort of the "fruit" of Fungi, and it's used as a food source. Edible mushrooms can grow above or below ground and are cultivated or, in the case of wild mushrooms, foraged.

How do you choose mushrooms?

There's an entire science (or art?) to foraging mushrooms, so we'll save that for another time -- you shouldn't forage for mushrooms unless you really know what you're doing! At the store, choose mushrooms that are not slimy, damp, or dried out. They should be free from mold or spoilage. I prefer to buy mushrooms that aren't pre-packaged, but those packages do make things easier at prep time.

How should mushrooms be stored?

The best way to store mushrooms is in a paper bag in a cool, dark place. The refrigerator works, too. They should be kept relatively dry, as excess moisture will cause them to spoil quickly.

Why should you eat mushrooms?

Different varieties of mushrooms have different nutrition profiles. Some varieties, like chanterelles, are high in vitamins, minerals, iron and protein. Others, such as white button, offer little nutritional value besides Vitamin D. All mushrooms are excellent sources of Vitamin D - in fact, they're the only vegetable that naturally contains Vitamin D. Interestingly, recent research has shown that exposing mushrooms to ultraviolet light (whether sunlight or artificial) significantly boosts their Vitamin D levels, up to 100% RDA! Most varieties are also excellent sources of some B vitamins (particularly riboflavin and biotin), and minerals like copper and selenium. They are also low in fat, carbohydrates, and calories.

What kinds of mushrooms are there?

There are so, so many kinds of mushrooms, it would be impossible to cover them all in this article. Here are some common fresh varieties: 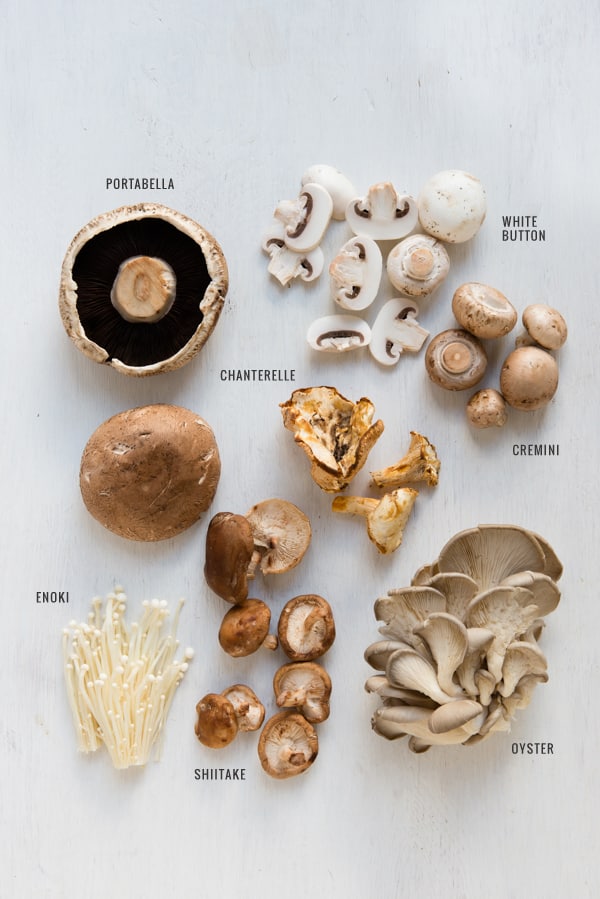 White Button // These are the most common variety you'll see in stores. White button mushrooms are mild in flavor -- they're immature or baby mushrooms that grow into larger portabellas.

Cremini (also known as crimini) // Like white button mushrooms, cremini mushrooms are also immature portabellas. The name changes from cremini to portabella when they reach about 4-inches in diameter.

Chanterelle // These are golden mushrooms with a meaty texture, sweet aroma, and peppery flavor. Chanterelles are grown primarily in the Northern Hemisphere, and they're high in Vitamin C.

Shiitake // Native to East Asia, shiitakes are now cultivated in other parts of the world too. They can easily be found both fresh or dried to use in various Asian recipes.

Oyster // The most commonly cultivated mushroom all over the world, oyster mushrooms can be found growing in the wild on trees. They have virtually no stem, and they're very versatile and quick-cooking.

Enoki // Also known as "golden needle mushrooms," enokis are used extensively in Eastern Asian cooking, primarily in soups and salads. Cultivated varieties are white due to lack of exposure to light, while wild varieties are much darker. 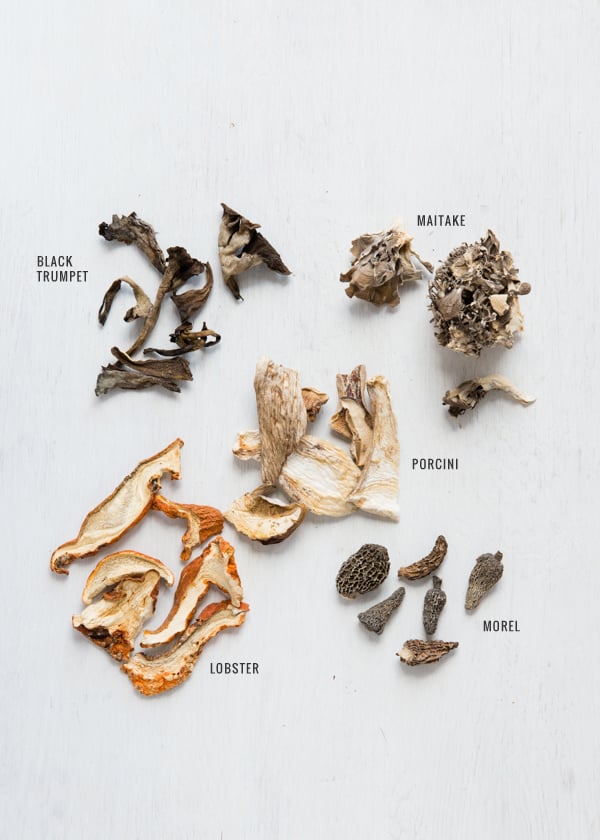 These are some common dried varieties of mushrooms (although if you're lucky, you may be able to find them fresh too!):

Black Trumpet // These are a wild variety found growing under birch and oak leaves on the ground. Black trumpets are actually a variety of chantarelle, and when dried, their flavor deepens and is reminiscent of black truffle.

Maitake // Also commonly known as hen-of-the-woods, ram's head or sheep's head, these are native to Northeastern Japan and United States, and they grow at the base of trees. Besides being used as a food source, maitakes are being researched for potential medicinal qualities in stimulating the immune system.

Porcini // A favorite variety all over the world, porcinis are usually sold dried for use in soups, sauces, and pasta dishes; look for fresh specimens in autumn.

Lobster // This is not an actual mushroom, but a parasitic fungus that attacks several other varieties of mushrooms and turns the exterior a bright orange color.

Morel // These mushrooms have a characteristic honeycomb top, and they're prized for cooking. Morels are especially at their best when fresh, but you can soak dried morels in milk or water to revive their delicate flavor. Morels are expensive, but if you live in an area where they commonly grow (such as the Great Lakes region), morel hunting is a fun way to track down these elusive specimens while saving money!

How do you prepare mushrooms?

Mushrooms are usually dirty, so take the time to clean them well. Because mushrooms are like little sponges, you don't want to get them too wet -- a damp paper towel is the perfect way to clean them off without soaking them, but if you're in a hurry, a quick rinse in cold water will do. Different mushrooms are trimmed and prepped differently. With shiitakes, you'll want to remove the entire stem, but for creminis and white mushrooms, you only need to trim the very end of it.

When it comes to eating mushrooms, the sky's the limit! They are wonderful raw, roasted, sauteed, stewed, in soups, and in sauces. Mushrooms are pretty much suited to any cooking method.

My favorite way to prepare cremini mushrooms is to marinate them in a little olive oil and balsamic vinegar with minced fresh rosemary, then roast them in a hot oven on a parchment-lined baking sheet for about 20 minutes. Perfection! And of course, wild mushrooms are fantastic in risotto and make the best pizza topping in the world.

Looking for more ideas? Browse all of our mushroom recipes here!