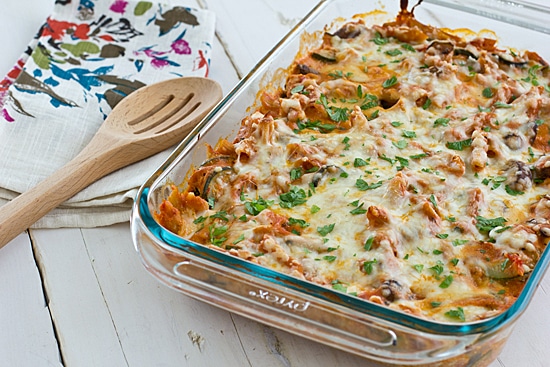 This Vegetable Baked Ziti recipe is vegetarian and lower in calories and fat than traditional baked ziti. It's Weight Watchers friendly too!

This January marks the eighth year that I've been doing Weight Watchers. While my weight has fluctuated since reaching my goal and I'm now actively trying to lose weight again, I really feel like it was joining Weight Watchers that prompted me to learn how to cook and get creative in the kitchen.

Because before Weight Watchers? Our meals were pretty much take out, stir fry, or pasta.

Pasta showed up on the menu at least once a week. I'd make a whole box (!!!) and my husband and I would split it. He'd put lots of sauce on his, while I'd put a little bit of sauce and a mountain of grated Parmesan on mine.

I was under the impression that a ginormous bowl of pasta was a typical serving--after all, that's what most restaurants serve, right? It was a shock to find out that those big boxes of pasta that my husband and I were eating by ourselves are meant to serve eight people. Oops.

One of the first changes I made when I joined Weight Watchers was downsizing those pasta portions.

And you know what? It tastes so much better that way too.

Using this same philosophy, I revamped my baked ziti recipe, something I occasionally made pre-Weight Watchers—my original version had massive amounts of cheese and pasta.

This version, Vegetable Baked Ziti, has a smaller amount of reduced-fat cheese and fat-free ricotta mixed in to give the casserole a creamy texture.

By adding lots of sauteed veggies, each serving contains less than two ounces of pasta. But it's so good, you won't miss that extra pasta or cheese at all! 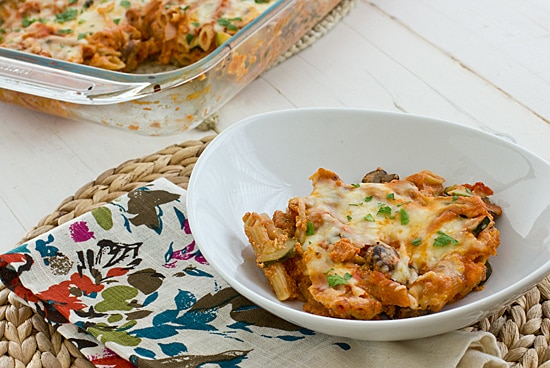