These Vegetarian French Onion Soup Sandwiches are full of caramelized onions and Gruyere cheese—a recipe for soup in sandwich form!

Soup with a Twist

I have been agonizing over what to call this recipe. Agonizing to an embarrassing degree. I swear, sometimes I spend more time coming up with names for recipes than I do developing the recipes themselves. I feel like the name of this recipe is confusing. Is it a soup? Is it a sandwich? Well, it's kind of both. It's French Onion Soup with a twist.

You see, in traditional French Onion Soup, you make the soup and float a piece of crusty bread topped with cheese on top of it. And it's delicious! This recipe is a little bit different, though. The bread, onions, and cheese are in grilled panini form. The (faux) beef broth is served on the side and you dip your sandwich into it. As you eat your panini, bits of onion, cheese, and bread fall into the broth so when you've finished off your sandwich, you have a little bowl of French Onion bliss waiting for you.

So is it a little confusing? Maybe. But it's really good, I promise! My husband, who isn't a huge fan of grilled cheese sandwiches, was really surprised how much these captured the flavor of French Onion Soup. As for me, I love anything involving melted cheese and caramelized onions, so I loved these sandwiches too. In fact, we loved them so much that we ended up having them for lunch two days in a row—they're great comfort food for a cold winter day. 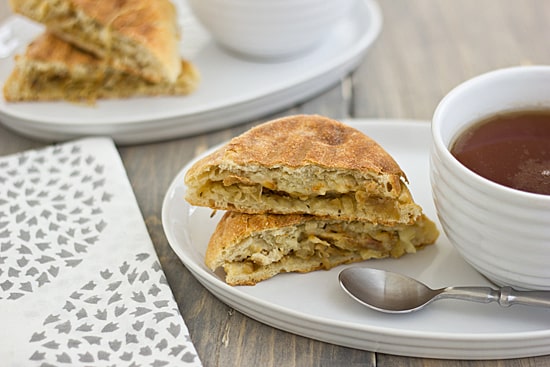