Christmas is still 10 days away, but I'm already drowning in candy and cookies. The thing about all those holiday treats is that at first, you're totally living the dream. Cookies for breakfast? Don't mind if I do! Salted caramels for dinner? Well, I bet they're a terrific source of calcium! And then after a day or two, the thought of anything sweet makes your teeth ache and your stomach do flip-flops. No more! You need to break up some of that 24/7 sugar cookie and fruitcake bonanza with healthy meals so your body doesn't hate you (even though your 7-year-old self might).

This Red Lentil Cashew Soup fits the bill. It's filling and cozy and it's made with ingredients other than frosting, chocolate and sprinkles. You've got some vegetables, protein-packed red lentils and Silk Cashewmilk. Which is new to me! I've been wondering for years why cashew milk isn't a thing — I mean, you can make it, but why isn't it readily available in stores like almond and coconut milk? Of all the non-dairy milk options out there, cashew milk has always been my favorite, but I only make it for myself once in a while. If you've never had it before, cashew milk is incredibly creamy and rich — much creamier than skim milk, but with fewer calories. It makes the best milkshakes and smoothies, the best hot chocolate and it's even good warmed up with a little cinnamon and maple syrup.
I wanted to add a touch of creaminess to this soup, so I used Silk Cashewmilk. Although other non-dairy milks would work too, I prefer the cashew variety because of its richness and slightly sweet flavor. And to go with the whole cashew theme, I made some curry toasted cashews for the topping. I like having stuff in my soup, so even when I make pureed soups like this one, I usually load them up with toppings to add flavor and texture. 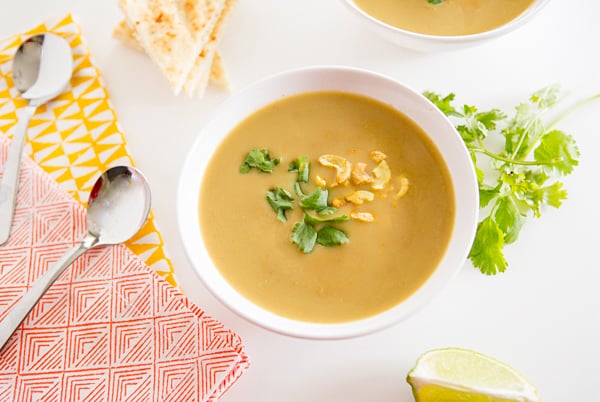