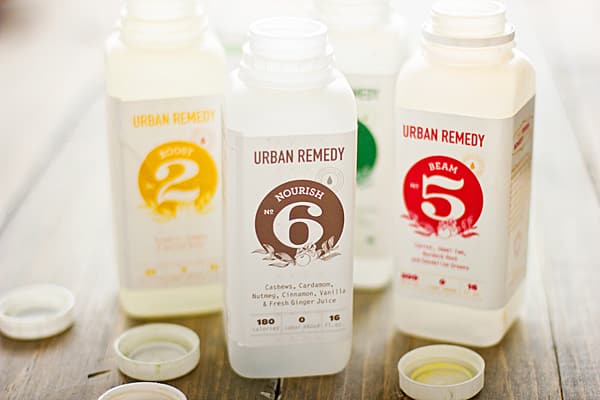 You were probably expecting a triumphant post today about how amazing my juice cleanse was, but here I am writing about quitting. Because I am a quitting quitter who quits.

I quit the juice cleanse.

Which, honestly, kind of killed me a little bit. That cleanse was a lot of money. And aside from that, quitting felt like admitting defeat. This was especially difficult for me when it seems like everyone else feels crazy amazing on a juice fast. Chris had the whole mental clarity, glowing aura of health thing going on and couldn't stop talking about how much energy he had, how great he felt, how he could wrestle a grizzly bear. And I just had an aura of "I spent the whole morning hunched over the toilet puking." (Because I did spend the whole morning hunched over the toilet puking.) At first, I wanted to soldier on. Then I thought: really? Am I really thinking about sticking with this? When it's making me physically ill?

So then I ate some saltines. And later, a falafel wrap. Because at that point, the thought of eating fruit or vegetables made me want to throw up even more.

I mean, I expected headaches. Hunger, I could deal with. But throwing up? Not so much. I am not a good thrower-upper. And juice that doesn't taste so good going down tastes even worse the second time around.

A lot of people say that when you get sick on a cleanse, it's your body releasing toxins. (I didn't really do the cleanse to release toxins--I'm not sure I believe that's a thing that happens, but I do believe that getting an insane amount of nutrients in juices for a few days can be beneficial.) But I eat pretty clean to begin with, so I really don't understand how my husband, who eats much more junk food than I do, could be feeling invincible, and I'd feel like jumping out of the window to end my misery. Especially after just coming off a 3-day raw cleanse that I felt fabulous on. I figured that, after a day and a half, I had given the 3-day juice cleanse a fair try, and since I felt progressively worse the whole time, it was time to throw in the towel. Something about those juices just did not agree with me--as soon as I'd start to feel a little bit better, I'd have another juice and feel terrible again.

I feel really disappointed. I was hoping for all those wonderful things people say happen to them during their juice cleanses--glowing skin, cleared sinuses, renewed energy. And instead I got crazy, ridiculously sick. Am I weak? Probably. But also, I think these cleanses just don't work for everyone. And they clearly don't work for me. There seems to be a lot of pressure that, once you've started a cleanse, you should stick with it and see it through; if you don't, it's some kind of moral failing. No, it's not! Listen to your body, always. I know that by posting this, I'm going to attract a lot of drive-by commenters telling me my body must be super toxic, that I didn't give this a fair chance, that I suck at life, and really, you can have at it; my experience is my experience and I stand by it.

So I'm sorry this post isn't super motivational. I guess I'm kind of being a bit of a downer today, huh? I'm not saying you shouldn't do a juice cleanse--my husband did well on it and so many other people have too. But know that it's not all sunshine and lollipops before you start, and maybe try a single day before you commit to three. Despite all this, I still got some positive takeaways from the whole raw food and juice cleanse thing: