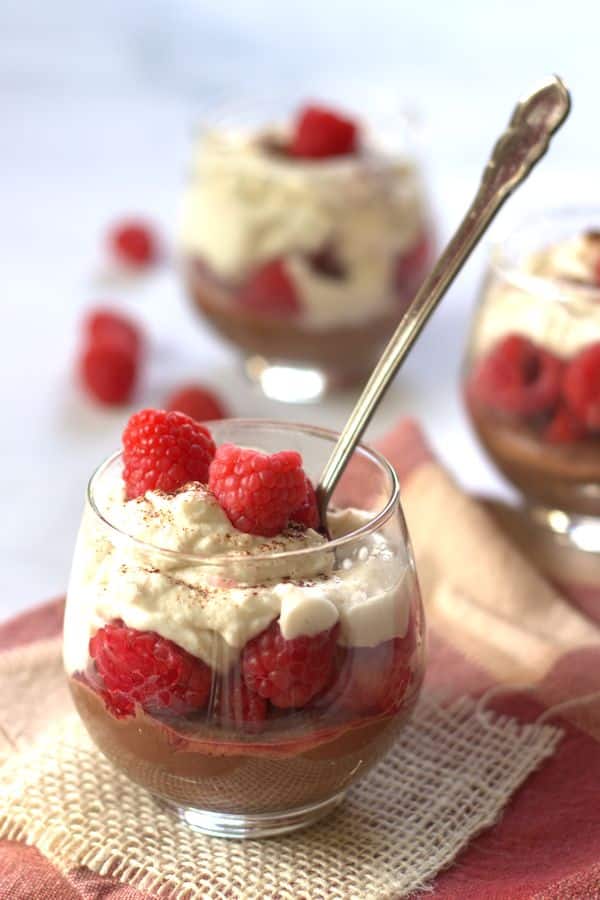 Around the beginning of just about every summer, my husband and I make big plans to try eating raw. It makes sense right? No need to fire up the oven all summer long, there’s lots of fresh produce available, and I’m sure we’d feel great. Alas, “Let’s eat raw this summer,” turns to “Let’s eat raw for July,” and eventually to “How about we just have a salad with every meal?” While I do eat quite a bit of raw fruits and veggies all year long, going completely raw can be a big commitment, and to be honest, I’m not sure my raw food cooking skills are up to the challenge just yet.

One aspect of raw food prep that’s actually really easy and I can totally handle is dessert. Surprising right? The awesome thing about raw desserts is that they typically take advantage of naturally rich or sweet plant-based ingredients that work best in their natural state, like nuts and fresh fruit, which is exactly what I’ve crafted these tasty little parfaits around. 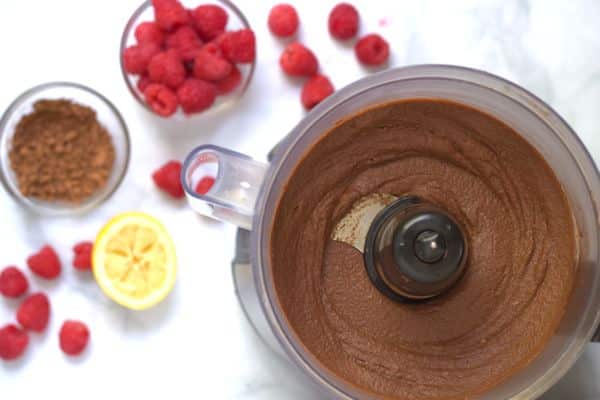 Cashews make a fantastic base for vegan cheese (more details on that here), and cheesecake is no exception. Add a bit of raw sweetener, blue agave in this case, and raw cacao powder, and you’ve got something that tastes like chocolate cheesecake. I decided to simplify and layer my cheesecake ingredients in parfait form, since it makes life a bit easier, tastes just as good, and looks extra cute. Since fresh summer berries are still available for at least a little while, and because I love the combination of chocolate and raspberries, I went and included fresh raspberries. Feel free to experiment with other fruits if you make this when berries aren’t so easy to come by. There isn’t much that doesn’t go well with chocolate cheesecake, so get creative.

Like my summer diet, these parfaits aren’t necessarily completely raw. The whipped coconut cream is a must, and canned coconut milk may have been heated during processing. Yes, there are ways of guaranteeing a completely raw coconut whipped cream, and they generally involve cracking open a fresh coconut. In the interest of making these easy and delicious, I didn’t think you’d mind creating some whipped topping from a can of coconut milk. 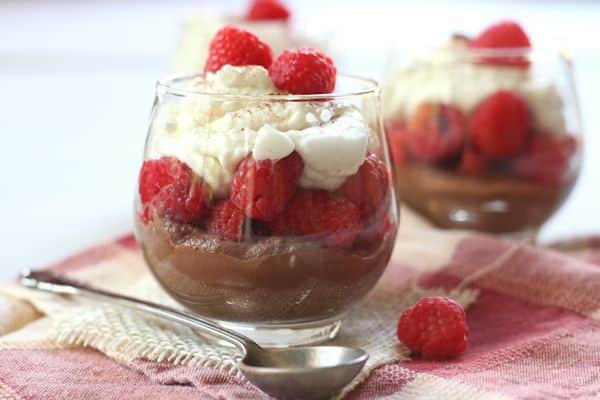 For the Chocolate Cheesecake Layer:

For the Raspberry Layer:

For the Whipped Coconut Cream Layer:

Prep time does not include the soak time for the cashews or refrigeration time for the coconut milk or cream.
Coconut milk or cream will work here, just be sure to use the kind from a can and not the carton (which is usually a blend of non-dairy milks) or cream of coconut (which is a sweetened product used for cocktails).
Coconut milk and coconut cream work equally well, but using coconut cream will yield a slightly larger batch.
Make sure your coconut cream or milk has separated before you begin whipping it. Placing it in the coldest part of your refrigerator should help with this. I sometimes even turn the temperature down a notch to make sure it fully separates. The solids, which you'll be whipping, will be white and slightly softer than butter. The liquid will be just a bit thicker and more opaque than water.
Feel free to substitute cocoa powder for cacao powder or non-raw agave or maple syrup for the raw blue agave. These ingredients work just as well, but aren't raw.