This vegan chickpea tikka masala is made with lots of vegetables and aromatic spices for an Indian inspired plant based dinner that's comforting and packed full of flavor. It's ready in under 30 minutes and requires just simple ingredients. Serve with rice or naan bread.

I can't believe it's taken me this long to share a Tikka Masala recipe here on the blog! I make this dinner for myself all the time, because it's so easy to make and always tastes phenomenal. You just can't beat a bowl of Tikka Masala served over a bed of rice, or with naan bread, after a long day. You need to try this out for sure if you're a plant based comfort food lover like myself!

This Indian inspired recipe is saucy, packed full of flavor, and made with spices that will make your whole kitchen smell amazing. The ingredients are also accessible and budget-friendly: you probably have most of them in your kitchen already.

Regardless, the flavors are incredible. This dish is intensely savory, with plenty of earthiness and a hint of tanginess too due to the tomatoes. The addition of coconut milk makes the Tikka Masala super creamy (don't worry, it won't taste like coconut though), while the chickpeas add extra deliciousness and plenty of texture together with the vegetables.

Plus, this meal is ready in under 30 minutes, making it perfect for a weeknight dinner to enjoy after a long day. It's family-friendly and great for batch-cooking, so I recommend you make extra and enjoy over the course of a few days! Trust me, this is too delicious to eat only once.

Here are the main ingredients you will need to make this amazing weeknight dinner:

How to make chickpea Tikka Masala

Start by heating the olive oil in a large pan for around 30 seconds over a medium-high heat. Now add the tomatoes, tomato paste, onion and garlic. Cook for around 5 minutes, stirring frequently, until softened and fragrant.

Next, add the red bell pepper, cumin, turmeric, paprika, and garam masala. Cook for 5 minutes more, allowing the bell pepper to soften. Then, add the mushrooms and cook for another 2-3 minutes, until they begin to shrink down.

Add the chickpeas, canned tomatoes, coconut milk, soy yoghurt, and chilli paste. Stir together, then lower the heat to a medium and simmer for around 10 minutes, stirring occasionally.

At the last minute, season to to taste with salt and stir in the spinach. Serve once the spinach wilts.

This chickpea Tikka Masala keeps well in the fridge for 3-4 days in an airtight container. You can also freeze it in individual freezer-friendly bags for up to 2 months. Leave to thaw in the fridge overnight, then reheat on the stove or in the microwave.

How to serve vegan Tikka Masala

I love serving Tikka Masala with rice. You can serve it with any rice variety of your choice: Basmati, Jasmine, wholegrain, etc. Naan bread is also delicious served with this meal. Garnish with fresh cilantro, some more vegan yoghurt, and chilli flakes.

If you give this recipe a go, be sure to tag me on Instagram (@ohmyveggies) so I can see your creations, and leave your feedback in the comments below together with a star rating! 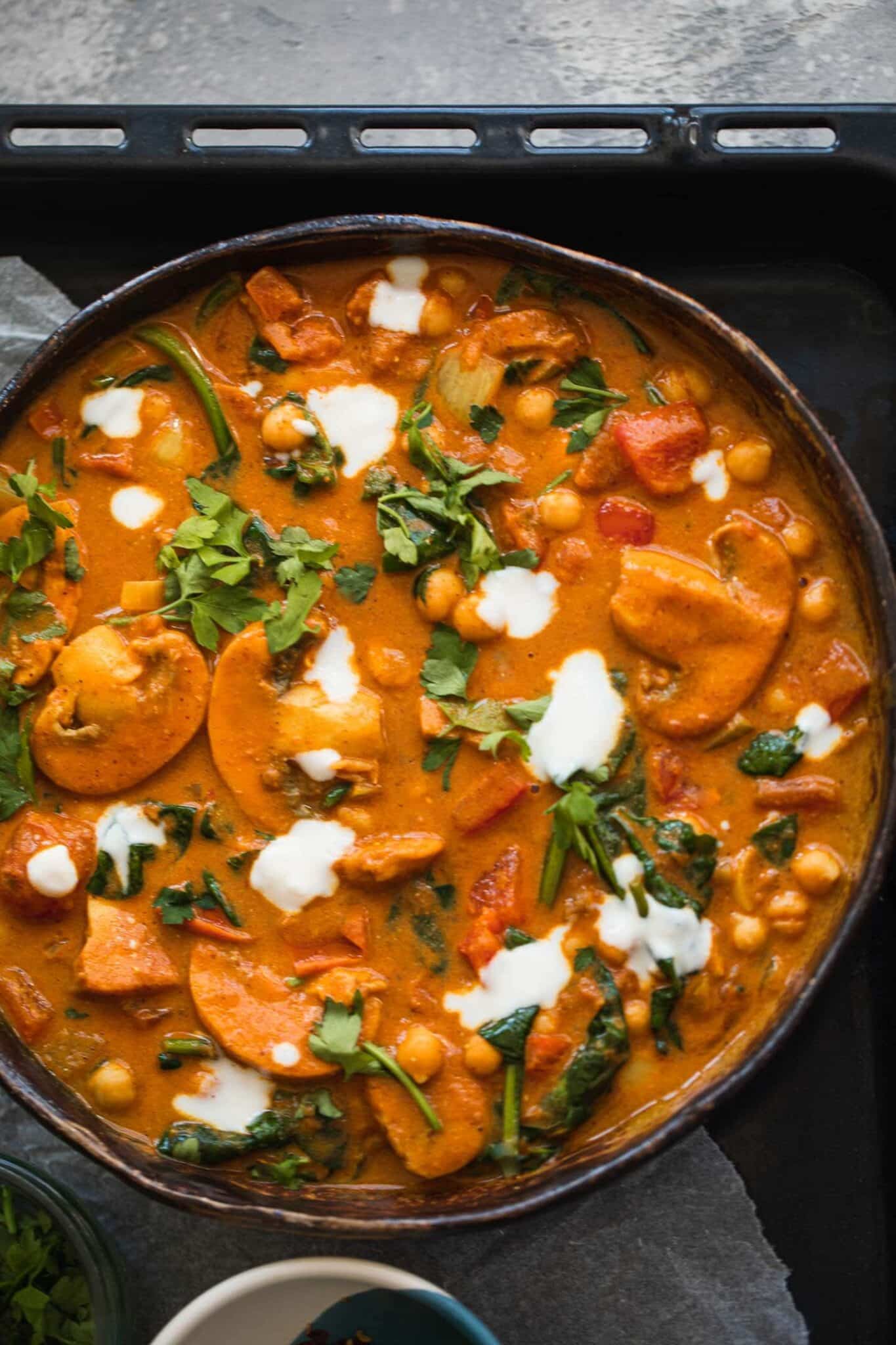