Sometimes I think I might have missed my life's calling, which was obviously to be a pizza-topping-thinker-upper. The options are ENDLESS! And somehow always tasty. Funny how that works.

Maybe it's because I come from a long lineage of pizza bakers, but I've never felt particularly tied down by the traditional tomato sauce + mozzarella + basil combo. There are just too many other flavors out there that need to be piled on top of a disc of dough for me to stick with just one for the rest of my life...instead I want to try them ALL. And I'm taking you along with me. 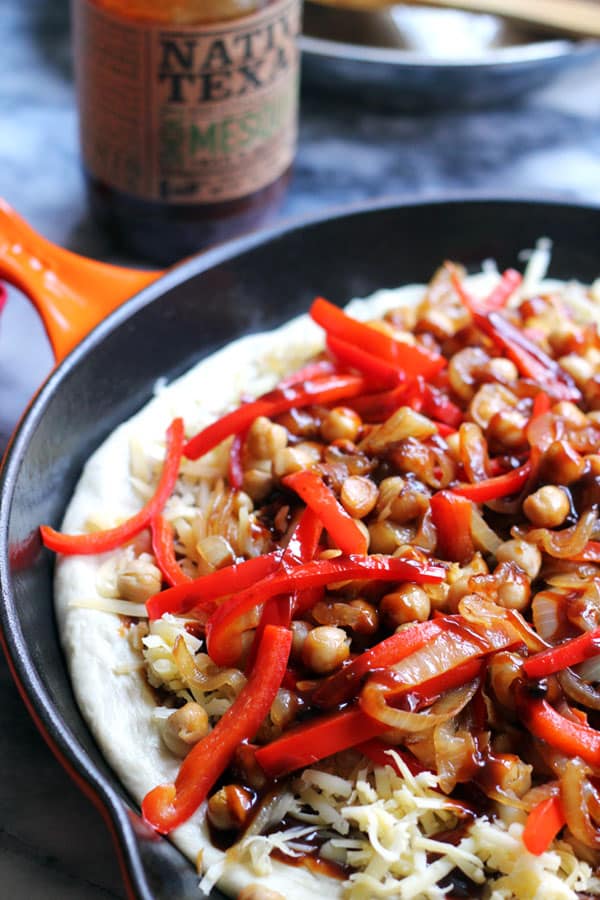 This BBQ sauce and chickpea medley has actually been lurking around my brain for a while as a potential pizza topper. It's modeled after a BBQ chicken pizza from California Pizza Kitchen that I ate way too much of in college and have been jonesing to vegetarianize ever since! Barbecue sauce serves as the sauce and it's topped with layers of gooey gouda, caramelized onions and peppers, and chickpeas. I highly recommend going spicy with the barbecue sauce that you use for this, otherwise it comes off as a little bit too sweet with the sweet caramelized onions and the sweet peppers.

Because I love a good thick crust, I made this deep dish style. The advantage of this is that deep dish dough only takes about a half hour to rise instead of the two hours required for thin crust dough. However, if you're using storebought dough (which is totally fine!), you can go either way as long as you adjust the baking time and temperature accordingly (see instructions in the recipe below). 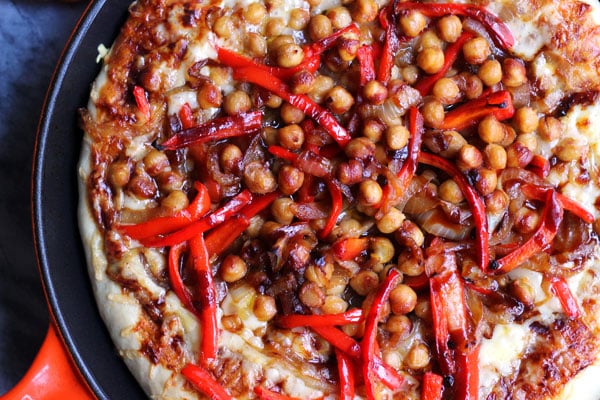 For the pizza crust:

For the pizza toppings:

To save time, you can always use storebought pizza dough to make this recipe! Just make sure it comes to room temperature before using it.
Additionally, this pizza can be made thin crust instead of deep dish by making it on a 14-inch pizza pan. In that case, bake at 500ºF for 10 minutes.