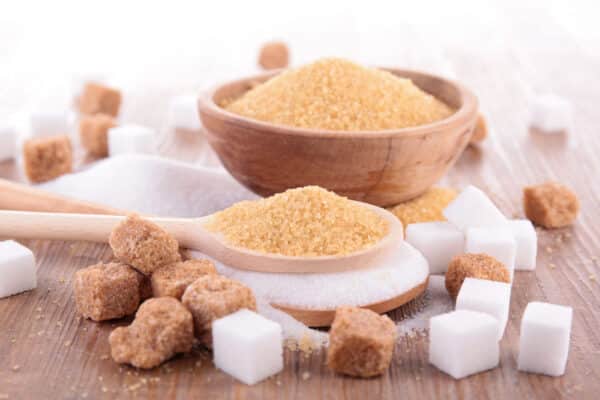 Not all that long ago a walk down the baking aisle would yield just two types of sugar: white and brown. Now it’s a sweet, sugary jungle out there with more choice than we really know what to do with. But what is all that stuff, and is any of it actually healthy? Let’s take a look at what’s what with the sweeteners on the shelf today.

Classic white table sugar is refined either from sugar cane or sugar beets depending on where you live. Sugar beets are much more common in Europe and most of what’s found in North America tends to be cane sugar. The sugar is refined to remove the molasses, leaving brilliant white granules, and no nutritional value other than being a source of pure energy (calories). A lot of, if not all, white sugar is refined using bone char, meaning that many vegans choose to steer clear of refined sugar.

The classic brown sugar that you find in big bags at the grocery store is typically just refined white sugar that has had some molasses added back into it. Although the molasses does provide a small amount of nutrition in the form of vitamins and minerals, this stuff can be seen more or less as the same as white sugar.

Turbinado sugar, made from the first pressing of sugar cane, is lightly refined by steaming away a portion of its molasses, which creates a fine grain and a natural caramel flavor.

Demerara sugar is similar to turbinado in that it’s produced from the first pressing of the sugar cane, although the grains are slightly coarser.

Sucanat is an intensely-flavored unrefined sugar made from crystallized pure sugar cane, which retains a higher portion of molasses than other types of cane sugars.

These unrefined sugars do contain some minerals including chromium, cobalt, magnesium, and zinc, which are typically stripped away in the process of refining white sugar. And while unrefined sugars contain only small amounts of these minerals, they do contain what the body needs in order to process and utilize the sugar.

Coconut sugar has been all the rage in recent years as a healthier alternative to cane sugar. Produced from the sap of the coconut palm tree, coconut sugar provides roughly the same calories as regular cane sugar does. But, coconut sugar ranks lower on the glycemic index than other forms of sugar do, which means blood sugar levels may remain more stable when consuming baked goods sweetened with coconut sugar compared to table sugar. It has a distinct but pleasant caramelly flavor, and can be easily substituted into recipes that call for white or brown sugar with good results.

Maple syrup comes from the sap of sugar maples (and a few other kinds of maple trees); when the tree is tapped it allows clear and nearly tasteless sap to run out freely. The sap is then boiled and evaporated to produce maple syrup with the characteristic amber color of maple syrup and a sugar content of about 60%. Maple syrup is rich in antioxidant minerals such as manganese and zinc, which can contribute to a healthy immune system. Apparently the U.S. may be facing a maple syrup shortage in the coming year due to temperature fluctuations causing the sap to start running early, so you may want to stock up now!

Honey is one of the most ancient sweeteners we know of. It has been used for thousands of years as a food, medicine, and athletic fuel among other things. Known to have antifungal and antioxidant properties, honey doesn’t require any preservatives or other additives; it’s just straight up liquid gold. Depending on where the bees picked up the pollen, honey may contain some vitamins and trace elements such as zinc and selenium. It’s always a good idea to choose a local honey from a small producer so you know how the bees are kept and where they’re finding their pollen. Honey isn’t considered to be vegan, so you’ll have to decide whether or not it’s right for you.

Agave nectar comes from the blue agave plant, which is also an essential ingredient in tequila production. Agave nectar is derived from the starchy root of the plant, which is then converted into a “syrup” through a chemical process. Agave was once a favorite natural sweetener for health gurus, but has had a bit of a fall out due to its extremely high fructose content – which can be upwards of 70% (high fructose corn syrup contains about 55% fructose) and the anything but natural process required to produce the syrup in the first place. Still, it’s a good option for vegans when used in moderation, as all sweeteners should be.

Dates are a great natural sweetener. In their whole form dates are especially rich in soluble fiber, which is the kind that helps maintain healthy blood cholesterol and stabilize blood sugar levels, as well as a host of different vitamins and minerals. Speaking of sugar, 100 grams of dates contains roughly 265 calories, about 90% of which is sugar. Date syrup is simply dates that have been cooked down with water and concentrated to produce a thick caramelly syrup. You can even make your own! And if your date syrup is simply whole dates and water cooked down, some of the dietary fiber will be retained. But the sugar content will also be concentrated in comparison to whole dates.

Stevia is a plant native to South America that has been traditionally used since the 16th century; the leaves have been crushed and used to sweeten tea and medicine. What we know as stevia today are sweet tasting compounds called steviol glycosides extracted from the stevia leaf, which are over 200 times sweeter than an equal weight of table sugar. Stevia is considered a zero-calorie sweetener because at the quantities typically used it is all but free from calories. Unlike other zero-calorie sweeteners, such as aspartame, stevia is derived from a plant, which means that it can be marketed as natural, although there are some who will only consider whole-leaf stevia as the natural option. Pssst! We did a Healthy or Hype post on stevia you may want to check out to learn more!

Whatever sweetener you decide to use, at the end of the day know this: sugar is sugar is sugar. Whether you’re using organic sugar-in-the-raw or agave or maple syrup, what you’re using is still a super concentrated source of calories. And while honey and maple syrup may contain some nutrients and are indeed nutritionally superior to refined white sugar, they are definitely not health foods. Everything in moderation!