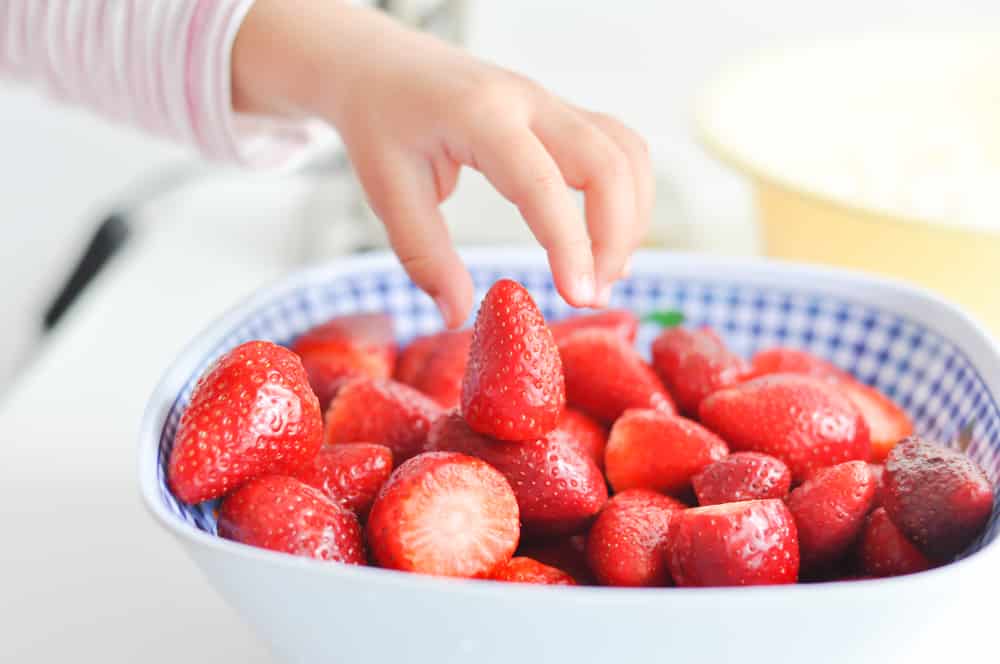 I’m a new-ish mom, with a super active 15-month-old who runs circles around me these days. I thought that when it came to feeding my kid I’d go into it with a confident sense of ease – after all, I do have 10 years of advanced nutrition education under my belt. But woah was I wrong about that. I felt suddenly insecure, panicked that I was under-nourishing my little fella, and questioned every bit of food I put in front of him (and every bit that ended up on the floor!).

If you’re raising veggie kids, it can seem even more daunting. There’s so much to worry about – are they getting enough protein? Do I need to think about iron? What about B12? It can be overwhelming at the best of times! But here’s a universal truth that I find comforting: lots of kids are super picky eaters. I’ve known kids who eat nothing but peanut butter sandwiches for years on end, and somehow they turn out just fine. That’s not to say we shouldn’t try our best to feed our kids a balanced diet, but don’t let vegetarianism throw you a curve ball when there are so many kids out there who put themselves on a restricted diet just by being picky eaters.

Still, there are some nutrition basics you should be mindful of when it comes to feeding vegetarian kids, so let’s get into it.

Yes, the ever popular “but where do you get your protein?” question comes up with veggie kids too. And protein is important for growing bodies and growing brains. Growing kids need roughly 1-1.5 grams of protein per every kilogram (there are 2.2 pounds in a kilogram) of body weight. Good sources of protein include beans, tofu, nuts, seeds, eggs, yogurt, cottage cheese, quinoa, and brown rice.

If you’re raising a vegetarian kid, it’s important to let your pediatrician or family doc know so that they can test iron levels from time to time. Iron deficiency can lead to low energy and cognitive defects over time, but it’s easily avoidable by being mindful of iron intake. The best plant-based sources of iron are legumes, lentils, beans, tofu, and iron fortified cereals. Egg yolks are also rich in iron if you’re not vegan. The recommended daily intake of iron for kids 1-3 years old is 7 mg. Learn more about iron here.

It’s also super important to be conscious of your veggie kid’s zinc intake, as it’s vital for a well-functioning immune system. Plant-based sources of zinc include chickpeas, beans, tofu, artichokes, and fortified cereals. It can be tough to reach the recommended daily intake of 10 milligrams of zinc on a vegetarian diet, so it’s a good idea to discuss this with your doc and decide on whether a supplement could be necessary.

It’s actually pretty easy to get a good amount of calcium on a plant-based diet. Tofu, whole grains, collard greens, kale, spinach, and figs are all good sources, as are fortified orange juice and fortified plant-based milks. The recommended daily intake of calcium for kids 1-3 years old is 700 mg. Learn more about calcium here.

If your veggie kid isn’t having dairy products, they should probably be taking a vitamin D supplement. Vitamin D3 is the most readily absorbed and used by our bodies, but as it is extracted from oils on sheep’s wool, many don’t consider it to be vegan. Vitamin D2, while not used as efficiently by our bodies, is totally vegan. The recommended daily intake of vitamin D for kids 1-3 years old is 15 mcg. Learn more about vitamin D here.

Growing brains depend on omega-3 fatty acids. In particular DHA is critical for brain development. Children get it first from breast milk or formula (a DHA supplement is important during pregnancy and lactation for this reason), but after weaning children need to get a reliable source.

There are some good plant-based sources of ALA, including chia seeds, flax seeds, and walnuts, which our bodies are able to convert to DHA, but it is unclear whether vegans with adequate ALA intake should also take a DHA supplement. Traditionally fish oil has been the go-to DHA supplement, but these days there are some good quality algae oils available as well. And since algae is where the fish get their DHA from in the first place, why not just start there? The American Dietetic Association recommends and average of 500mg of total EPA and DHA per day. Learn more about omega-3's here.

Vitamin B12 plays an important role in brain development and function, as well as cell metabolism and DNA synthesis. Vitamin B12 is found in most animal foods, including meat, fish, eggs, and milk products. Other than some fermented foods, there are very few non-animal food sources of biologically active B12. But, there are lots of vegan foods that are fortified with vitamin B12, including non-dairy milks, breads, cereals, meat substitutes, and some types of nutritional yeast – but not all nutritional yeast has been fortified, so check the label carefully. The recommended daily intake of B12 for kids 1-3 years old is 0.9 mcg. Learn more about vitamin B12 here.

Many of the above vitamins and minerals can be resolved with a multi-vitamin or supplement. If you’re concerned about your veggie kid’s intake of any of these, please speak to a qualified veggie-friendly health care professional before you start supplementing.