Oh My Veggies » Plant Based Nutrition & Health » Iron: What Every Vegetarian Should Know 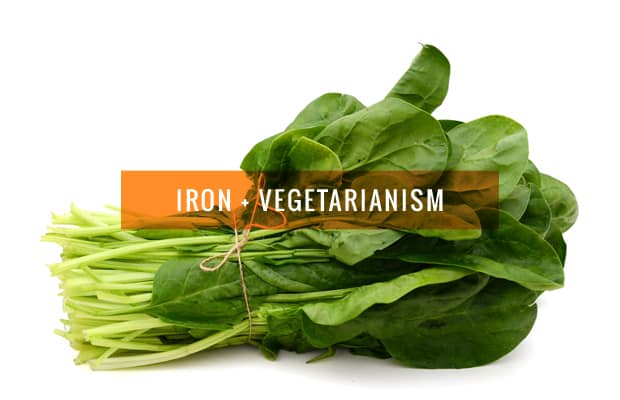 As vegetarians, other than questions about where we get our protein, one of the most common questions we face is, “how do you get your iron?” So what exactly is iron, why do we need it, how much do we need, and what are the best food sources for vegetarians? Let’s break it down.

Iron is an essential mineral, the single most common element on earth (by mass), and one that is naturally present in many foods. It’s also added to other foods (via fortification), and is available as a dietary supplement.

Iron is a part of each and every one of the cells in our body, and plays an important role in many of our bodily functions. It’s is an essential component of the protein hemoglobin, which carries oxygen from our lungs to tissues all around our bodies. It’s also a component of another protein called myoglobin, which helps our muscles both store and use oxygen. Iron is an important part of many enzymes, and is necessary for growth, development, cellular function, and the synthesis of some hormones and connective tissue. In other words, it’s pretty important stuff!

How much iron do you need?

This varies a bit from person to person. Adult men and women of menopausal age require only 8mg/day. Women of childbearing age need 18mg/day and during pregnancy that gets bumped up to 27mg/day.

Signs of iron deficiency anemia can include:

Someone in the early stages of iron deficiency may have no symptoms, so it is important for at-risk groups (such as adolescent girls, pregnant women, some vegetarians, and young children) to be screened. If you’re concerned that you might be iron deficient, speak to your doctor, who can arrange for blood tests.

How do you go about getting enough iron in your diet?

Unfortunately for us vegetarians, nonheme iron is not absorbed as readily by the body as heme iron is. Additionally, many plant foods contain compounds, such as phyates and polyphenols, that actually interfere with iron absorption. Because of this, the recommended daily intake of dietary iron can be up to 1.8 times higher for vegetarians than for people who eat meat. Calcium from milk or dairy products can also decrease the amount of iron absorbed at a meal. But, foods containing vitamin C can enhance absorption of nonheme iron when eaten at the same meal.

For most people who eat a balanced diet, these issues of increasing or decreasing absorption are a non-issue. Vegetarians need to pay a bit more attention since we don’t consume easily absorbed heme iron, and many of the foods we eat contain compounds that impede the absorption of nonheme iron.

Despite this, it’s important to note that iron deficiency is no more common in vegetarians than it is in the rest of the population. This is likely due to the balanced plant-based diet that many vegetarians consume which includes a mix of iron rich foods like legumes, seeds, and leafy greens, which also happen to be a good source of vitamin C.

Dried fruits can also be a good source as they are often dried in iron pans, and cooking acidic foods such as tomatoes in cast-iron cookware increases iron content of the food.

Also good news for vegetarians is the fact that many of those iron-rich foods, such as broccoli and bok choy, are rich in vitamin C. Otherwise, pairing foods at the same meal, such as a spinach salad with slices of orange, helps with the absorption of nonheme iron.

Since the calcium in milk and the tannins in tea both impair iron absorption, you may want to avoid drinking either of those with your meal. Stick to water and enjoy tea after dinner instead. This is also something to consider if you like making green smoothies--I don’t recommend putting dairy in a green smoothie since the calcium can interfere with iron absorption, and some of the compounds in the greens can impair calcium absorption, so it’s a lose-lose situation.

Many foods, such as cereals, flours, pasta, rice, and non-dairy milks, are also fortified with nonheme iron, and can contribute to your daily iron intake. In fact, in the US up to half the dietary iron intake is said to come from fortified cereal grains and their products.

Depending on your diet, age, and other lifestyle factors, you may or may not need one. I’ve been vegetarian for over 20 years and have never needed a supplement. But, there are many factors aside from diet that could contribute to needing an iron supplement, such as illness, heavy menstruations, some stomach and intestinal conditions, and pregnancy.

The only way to find out for sure if you need a supplement is to see your doctor and get a blood test. There are also a variety of iron supplements on the market, so you should speak to your doctor about which one best meets your needs.

As with many things, balance is key. Since many vegetarian foods interfere with iron absorption, eating a varied diet that includes legumes, dark leafy greens, and some soy products is advisable. If you're concerned about iron deficiency or wondering whether supplementation is right for you, speak to your doctor. Now go cook some tomatoes in an iron pan!