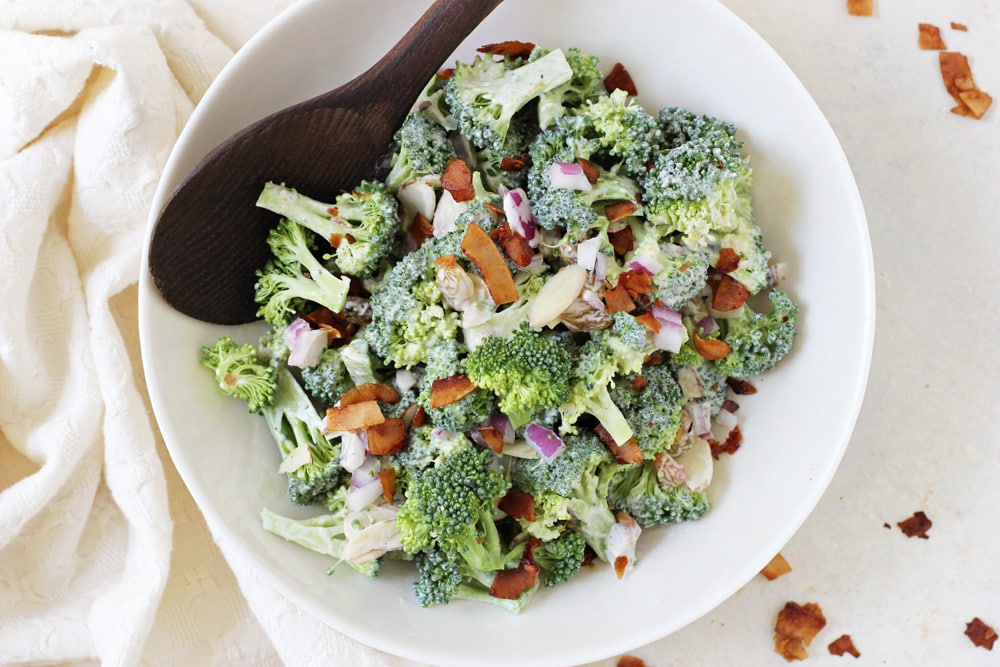 For the longest time, I was that person who steered clear of broccoli salad. Growing up, it was always drowning in heavy mayo, overly sweet, loaded with just so much bacon, and well, not really my thing.

But once I started cooking for myself, I realized that it didn’t have to be that way. Which was a very happy discovery for someone like me who absolutely loves all things broccoli.

And today’s version may just be my favorite to date. It’s filled with many of the same components as the classic dish — like broccoli florets, golden raisins, red onion and some sliced almonds. But instead of mayo, the dressing is made with a yogurt base and then jazzed up with some apple cider vinegar, maple syrup and a hint of Dijon mustard. It’s creamy, tangy and flavorful, but doesn’t drown out all the other ingredients.

But the best part? The coconut bacon! 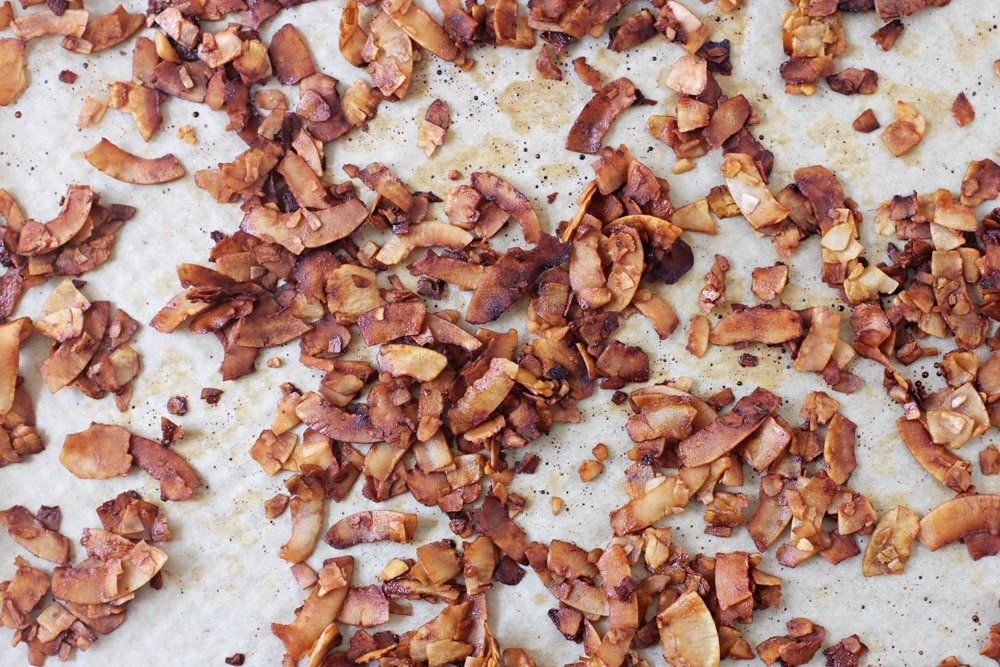 Oh the coconut bacon. Crispy, salty, sweet and smoky, it’s just about the best thing ever. I have never been a fan of regular bacon, but this coconut version? It’s downright addicting.

Now, a few things to keep in mind. Please keep an eye on the coconut bacon in your oven! It can go from perfectly browned to burnt incredibly quickly. Additionally, you can give it a stir more than once during the cook time if you notice that it’s starting to brown unevenly.

I personally like to add the coconut bacon into the salad right before serving so that it stays crisp, but you can absolutely mix it in and keep the salad fully assembled in the fridge. Completely up to you. If you make the bacon in advance, you can store it in the freezer (this keeps it crisp and it takes just a few minutes to come back to room temp). 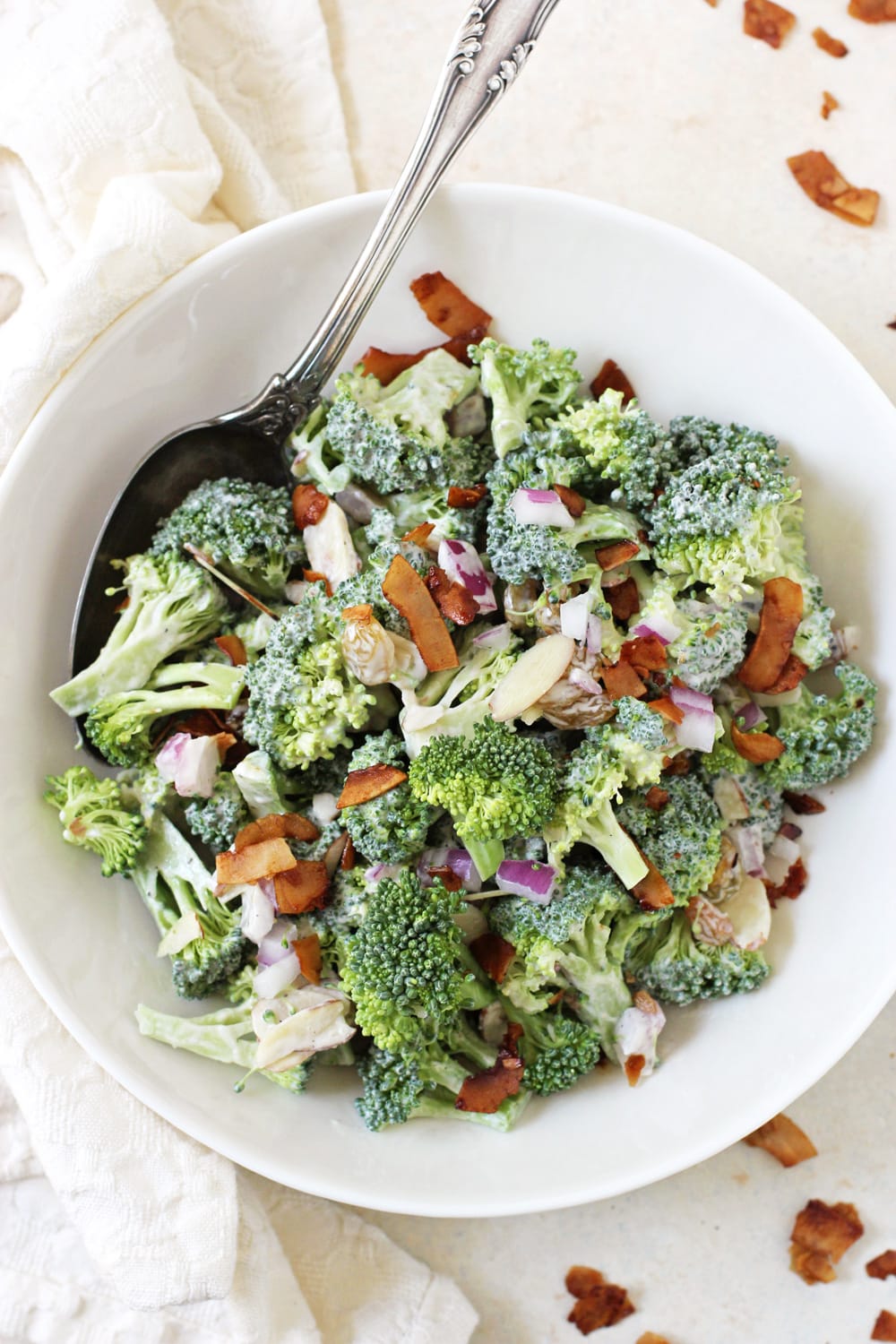 One last note, both plain Greek yogurt and plain dairy-free yogurt can be used in the dressing. The dressing will be a bit thinner with the dairy-free yogurt, but it still works great. Just make sure that your yogurt is unsweetened (if it isn’t, I’d either completely eliminate or cut down on the maple syrup to taste).

For the coconut bacon:

For the coconut bacon:

Keep any extra coconut bacon in an airtight container in the freezer. It comes back to room temperature in just a few minutes.
Craving more veg-friendly recipes? Shop our collection of vegetarian and vegan cookbooks!
Previous Post: « Summer Vegetable Skillet Lasagna By Oh My Veggies.com
Next Post: A Nutritionist's Tips for Summer Hydration »