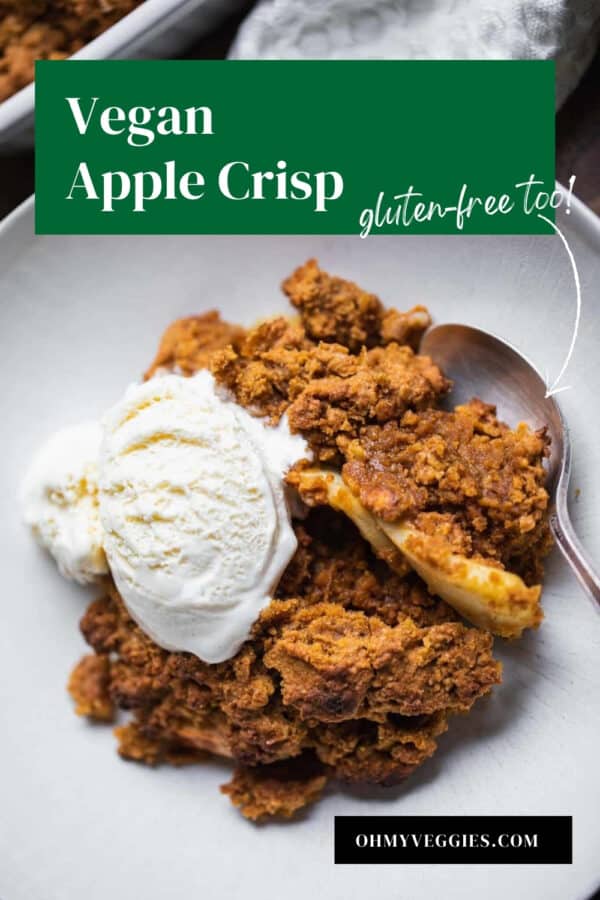 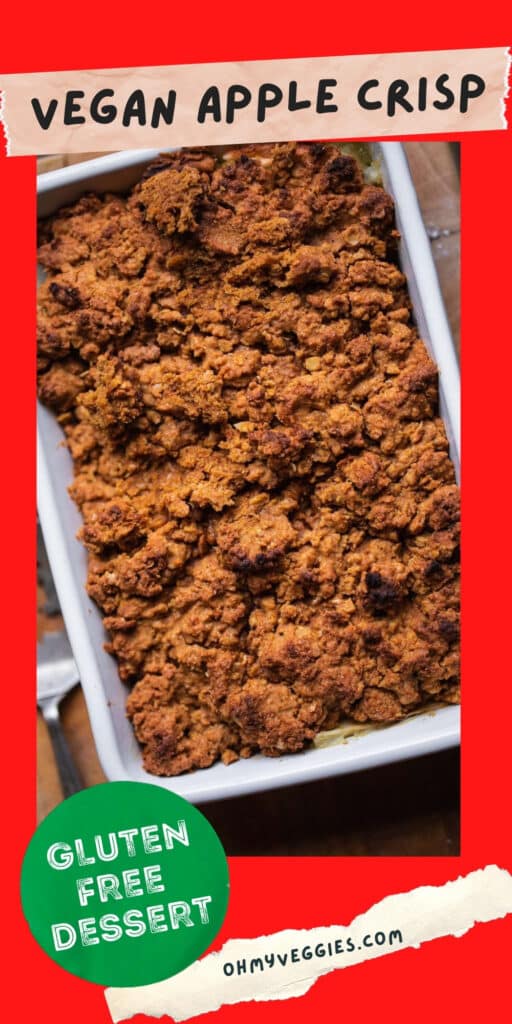 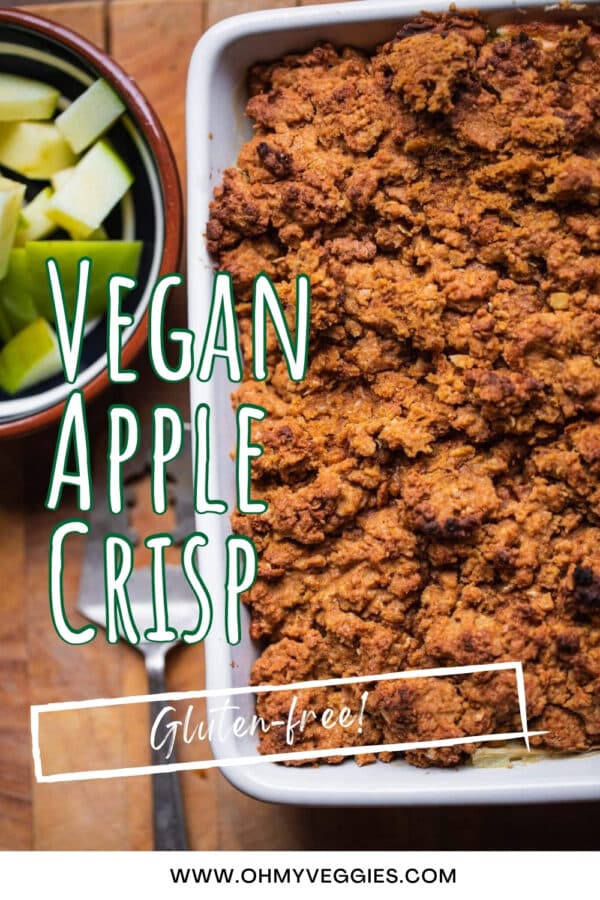 This vegan apple crisp is the ultimate comfort food. Perfectly caramelized apples are paired with a crunchy oat topping, then drizzled with a sweet maple syrup. Top it off with some dairy-free ice cream for an indulgent dessert!

This vegan apple crisp (sometimes called an apple crumble) is so easy to make. Like, really easy. This recipe needs less than 10 ingredients, a minimal amount of work, and gets you maximum flavor!

This vegan apple crisp is a modern twist on a classic British dish. The soft, caramelized apples perfectly balance the crisp and buttery oat topping. And I love the subtle sweetness of the coconut sugar and maple syrup.

My secret ingredient, the peanut butter, adds a rich and nutty taste to the crumble, which makes it stand out from other recipes. You could also add spices like cinnamon or ginger, to take this dessert in another direction.

This vegan dessert is simple enough to make on a weeknight, but decadent enough to serve at a holiday meal. I love to have mine with a scoop of dairy-free ice cream!

The ingredients you need for this gluten-free vegan apple crumble are:

Next, peel and slice the apples into chunky segments. Layer these slices in the baking dish, then drizzle evenly with the maple syrup.

Layer the crumb on top of the apples. I like a thick layer of topping over my fruit, but you can build it up to your preferred thickness.

Then bake it in the preheated oven for 40-45 minutes, until crispy and golden brown on top.

This dessert is best when served immediately with dairy-free ice cream. I’d recommend a simple flavor like vanilla, otherwise you could overpower the delicious, caramelized flavor of the apples.

The warmth of the pudding and chill of the ice cream is a match made in heaven!

You can prepare the oat topping a few days before you want to construct your crumble, as long as you refrigerate it in an airtight container. However, I recommend preparing your apples as close to baking as possible, to prevent them from browning.

If you work your crumble topping with your hands, or spend too long combining the ingredients, you can melt the butter which may result in the mixture sticking together too much. Try to combine your ingredients quickly, to ensure you get small, even crumbs.

If you don’t want to make one giant vegan apple crumble, you could try baking it in individual ramekins.

This gluten-free vegan apple crumble lasts up to 3 days in the fridge or up to 1 month in the freezer. To reheat I like to cover it in foil and put it in the oven for 15 mins at 180 degrees C – just make sure you defrost before reheating.

If you love this vegan apple crumble, be sure to check out these other delicious dessert recipes: 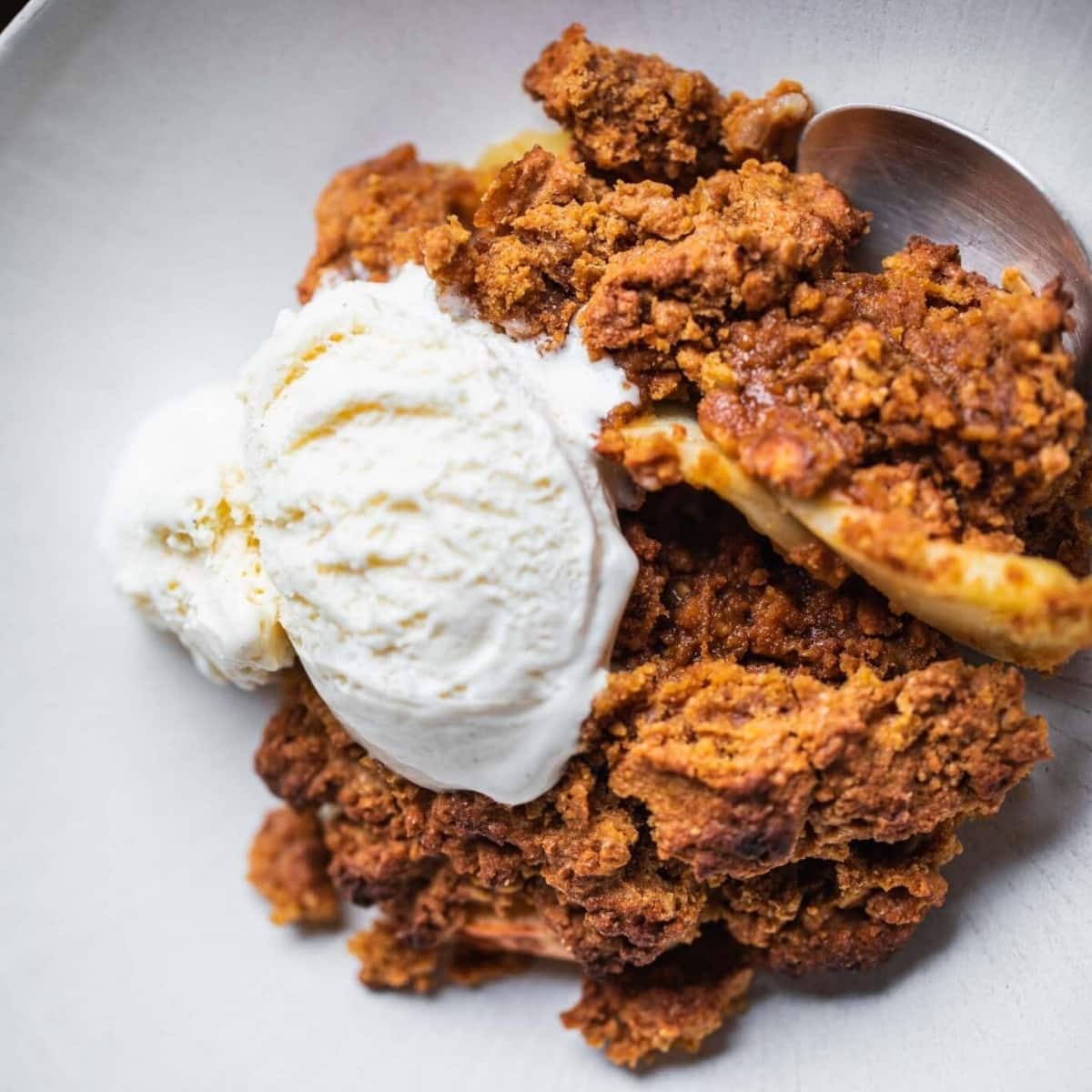