Farro—used as the "meat" in this Ultimate Vegan Taco Salad recipe—packs a major health punch in a tasty way. It's got great texture and lots of protein!

There are recipes where you look at them and think, "Oh, that looks good." And there are recipes that make you feel excited. The recipes that fall into the latter category for me are ones that use ingredients in ways I hadn't thought of before. Cookie Monster Cooking's Crockpot Barley and Bean Tacos is one of those recipes. Because who would think to use barley as a taco filling?! But it makes so much sense—whole grains like barley, steel-cut oats, farro and wheat berries have a nice, chewy texture that makes them a great substitute for ground beef; because they're whole grains, they have protein too. 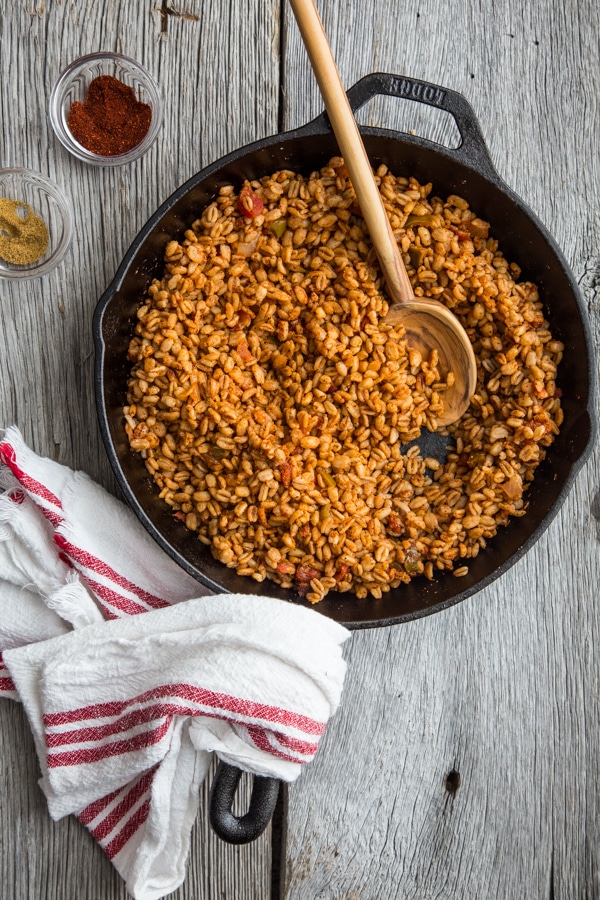 Using Ashley's idea as inspiration, I decided to try using farro as the "meat" for this vegan taco salad. My little shortcut taco filling is black beans simmered in salsa—because why bother with tomatoes and onions and garlic and jalapeños when a jar of salsa has all those things? So after cooking the farro, I added mild salsa and taco spices like chili powder and cumin. I went back and forth about the amounts of spices quite a bit (which means we ate a lot of taco salad for a few weeks—those were a glorious few weeks), but settled on the quantities below—before adding the farro to the salad, the taco "meat" tastes a little bit over-seasoned, but eaten as part of the salad, it's perfect.

Like any salad recipe, this one is highly customizable—make it your own! I wanted this to be a meal salad, so I added fire-roasted corn, black beans and tortilla chips. If you don't have time for soaking the cashews, a simple olive oil and lime juice dressing will work or use a store-bought ranch dressing if you're not vegan. (But if you have the time, make the Creamy Lime Dressing—it's so good!) You can serve this with the farro warm or cold and if you're making it for lunches, it will last several days in the fridge. 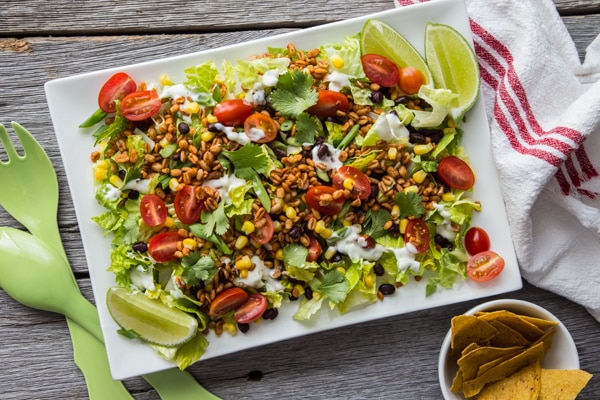 For the Farro Taco Meat:

For the Creamy Lime Dressing:

To make the Farro Taco Meat:

To make the Creamy Lime Dressing:

To assemble the salad: