As I was coming up with my meal plan for the week, I had the idea to make lasagna with sweet potatoes, caramelized onions, and kale. The more I thought about the logistics, though, the more it sounded like a bad idea. Or maybe I was just too lazy to attempt to make it. One of those things. And then it hit me--this combination would actually make a good pizza. Sweet potato pizza! So that's what I did--instead of a traditional tomato sauce base, I made a sauce with sweet potatoes and fresh sage and used caramelized onions, kale, and Fontina cheese as the topping. If you're ambitious, you can make your own crust, in which case you should probably add the kale halfway through your cooking time so it doesn't burn. 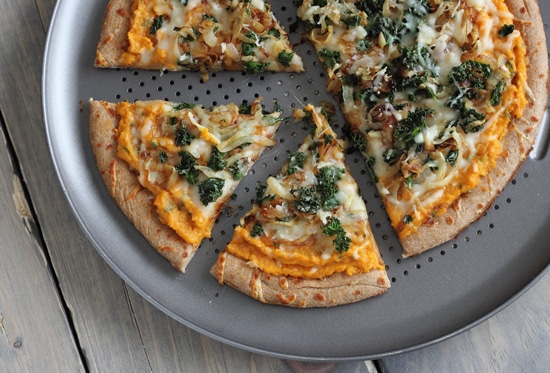