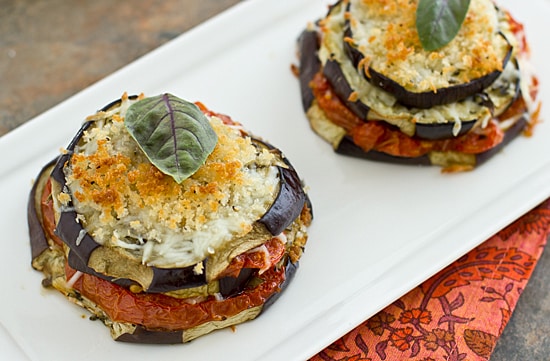 Eggplant is not a very popular vegetable. In fact, a lot of people tell me they don't like it--usually this is followed by, "it's so slimy!" But it's time to give eggplant another chance! Because it doesn't have to be slimy or mushy or bitter or any of those other things people attribute to eggplant.

I'm pretty sure a lot of the eggplant haterism stems from bad Eggplant Parmesan. And as a vegetarian, I've definitely had my share of this--it's often one of the few meatless entrees at Italian restaurants. It's fried, but the breading is soggy. Once you get past the soggy breading, you're greeted by a slimy interior. And then to make up for the general terribleness of the dish, they add cheese. Lots and lots of cheese. No wonder people think they don't like eggplant. 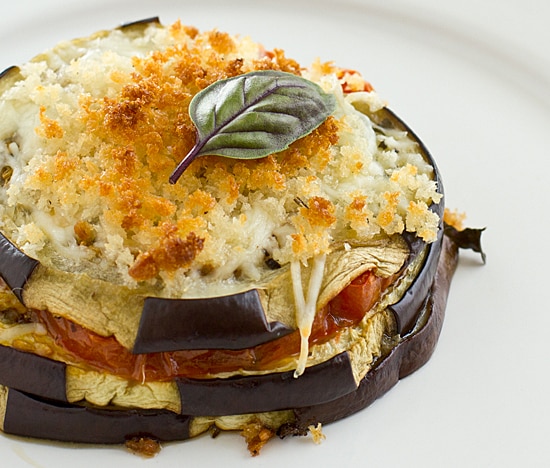 However! When you roast eggplant, the texture is completely different. As long as you don't add too much oil to it, it won't get soggy. And if you use fresh eggplant (like from your local farmers market!), you're not going to get any bitterness either, so there's no need to salt it.

I had originally planned on making this Eggplant Parmesan Stacks recipe with tomato sauce, but when I saw these tomatoes at the farmers market, I changed my mind. Okay, so maybe I made this decision based solely on looks (pretty tomatoes!), but it worked out well in the end. They give the Eggplant Parmesan Stacks that lighter, fresher flavor I was looking for. 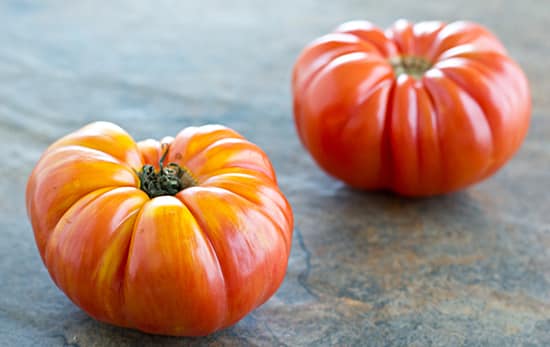 The eggplant and tomato slices are roasted before stacking them; this helps keep the eggplant from getting mushy from the tomatoes' juices. To make this dish lighter than traditional Eggplant Parmesan, I added only a quarter cup of cheese to each stack. And rather than breading the eggplant slices, I topped them with a little bit of panko--by putting it on top, it stays crunchy and delicious.

So see, this is nothing like the bad Eggplant Parmesan that makes people hate eggplant. No sliminess! No soggy breading! And a sensible amount of cheese. Now who's ready to give eggplant another try? 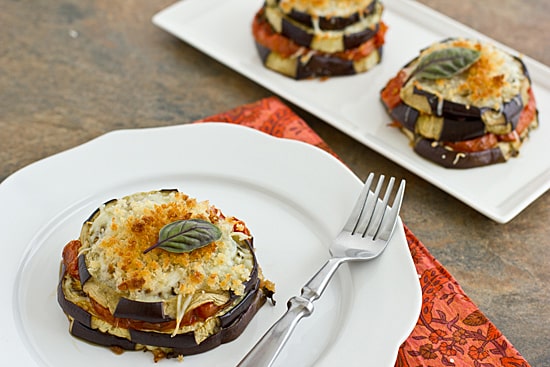 When you roast eggplant, the skin can get a little bit tough. Either peel the eggplant entirely or peel alternating one-inch sections around the eggplant (as seen in the photos).