Game day food is an important subject at our house. My husband is a huge football fan and most weekends during the season there are multiple games that must be watched. As for me? I preoccupy myself with the food. That’s my favorite part of football season.

The Super Bowl is just around the corner, yet this is also that time of the year when I’m still craving healthier foods after all the madness of the holidays. These eggplant spinach meatballs are the perfect compromise. Fun and football appropriate, yet packed with ingredients that won’t throw your goals for the new year off track.

Don’t like football? Don’t worry! These meatballs also make a delicious dinner - served over spaghetti, zucchini noodles, or even with some crusty bread! 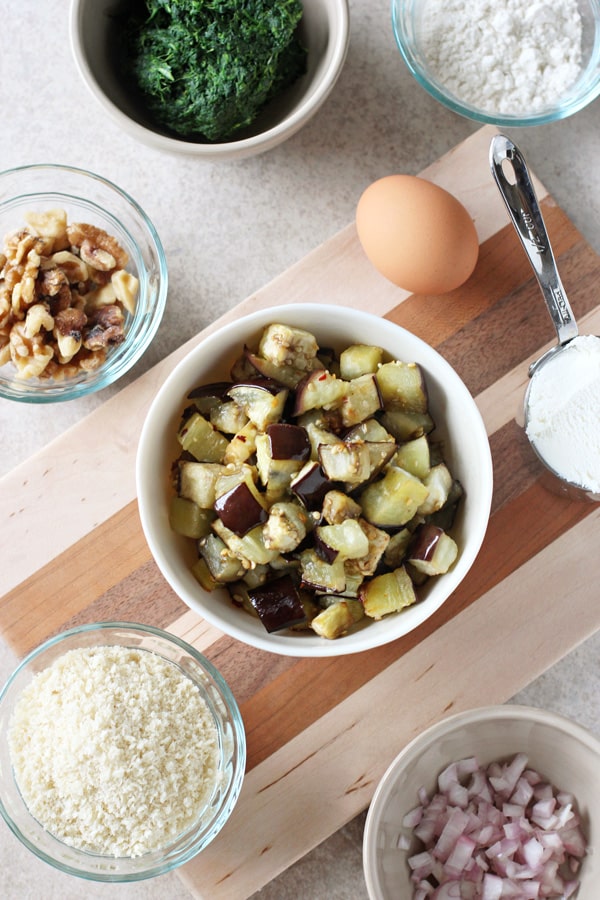 These meatballs do have a few steps, but each is simple. First, you’ll roast some eggplant to get it nice and tender. The eggplant is then added to a food processor, where you’ll pulse it a few times to break it down and make it easier to form into balls later. In my food processor, this takes about 4 to 5 pulses -- you want to pulse enough to chop it, but not go so far that it turns into a puree - so there is still some texture.

The eggplant is then mixed together in a large bowl with a few more ingredients, like ricotta, spinach, ground walnuts, and bread crumbs. The mixture will be on the wet side, but you should be able to form it into balls. If it seems too wet, you can add in a little bit of flour at a time (about 1 tablespoon) to get it to a point where you can form it into the balls -- but don’t add too much extra or the meatballs will be dry after baking! A cookie scoop really is your best friend here. It makes the process much easier and you’ll also wind up with meatballs that are all the same size.

One final note -- if your ricotta is liquidy, you may want to strain it before using. Excess moisture and liquid will make it difficult to form the mixture into the meatballs.