Full disclosure: before coming up with this recipe for Baked Vegetarian Portobello Mushroom Taquitos, the only taquitos I've had were the frozen ones from Trader Joe's. And I didn't like them. I didn't hate them either, but I was left feeling pretty meh about the idea of taquitos after that. I was going to do this recipe as tacos, but for some reason, I thought, "No, I'm going to do taquitos instead! Yes, mushroom taquitos! That's the ticket!" After a little bit of Googling, I realized that taquitos were fried. Could they be baked instead?

Yes! It is possible to bake taquitos! I found this out after some more Googling (what did we do before Google?!) and finding a recipe for Baked Chicken Taquitos on the Whole Foods website. I was a little bit put off by their method of soaking the tortillas in warm broth before filling them, so I skipped that and simply warmed the tortillas instead, which is what I do when I make enchiladas. 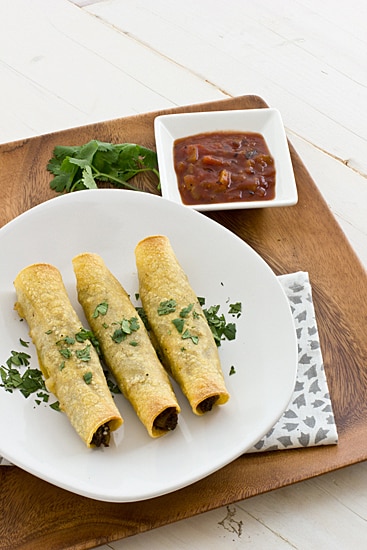 Many times when you bake something instead of frying it, it really pales in comparison to the fried version. You try to convince yourself that it's just as good, but y'all know those oven fries just aren't the same as fried fries. You know it! Maybe since my previous taquito experience is only the frozen variety, I don't have the best basis to make a comparison, but I was surprised by how good these were—despite not being fried, they still turned out crispy. And between the crispy exterior and the flavorful mushroom filling, these were a pretty big hit with both me and the husband. If you're not a mushroom fan, try substituting zucchini or yellow squash instead. 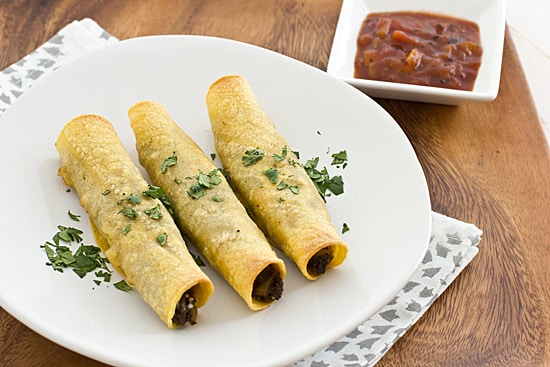