Oh My Veggies » Kitchen and Home 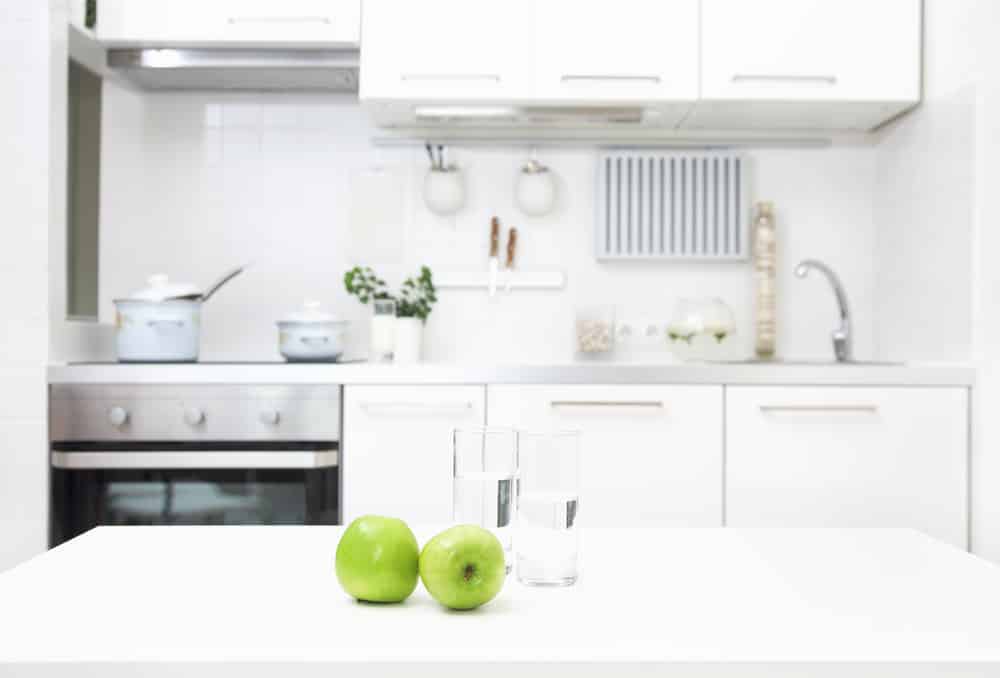 Minimalism is everywhere lately and while there's lots of talk about simplifying your wardrobe and purging old books, the kitchen doesn't get nearly as much attention. But it should! It's easy to accumulate a lot of things you don't really need in the kitchen, especially if you enjoy cooking.

We had a huge kitchen and a pantry and it still wasn't enough for all of my kitchen gear. I used food blogging as an excuse, but over the past year, I've embraced minimalism and applied it to all areas of my life—including the kitchen. The result is a streamlined workspace that might not have a tool for every fruit and vegetable, but that functions so much better than the cluttered, packed-to-the-gills space I used to work in. Here's how I did it.

Use the Bulk Section

Food took up a ridiculous amount of space in my kitchen. Bags of exotic flours, nuts, beans and spices that I bought for a single recipe and never (or rarely) used again occupied several shelves in the pantry—until they inevitably expired and I'd have to throw them away. Now, if I need an ingredient I know I probably won't use again, I buy the exact amount the recipe calls for from the bulk section instead of purchasing an entire package. You can even bring measuring cups with you to the grocery store or mark ¼ cup increments on a mason jar and use that for your bulk purchases. Not only is this a great way to save space, it's also a great way to save money.

But Don't Buy in Bulk!

The other reason why food took up so much real estate in my kitchen was because we'd buy more than what we could use in a reasonable amount of time. Instead of having 2-3 bags of chips, we'd stock 10; instead of 1-2 boxes of cereal, we'd have 5. Whenever anything was on sale, I'd feel compelled to stock up. Since there are only 2 adults and a baby in our house, we really don't need to stockpile food like that, so I stopped. We buy a bag or two of chips, a box or two of cereal, and when we use them up, we buy more.

We've tackled the food, so let's move onto kitchen gear. I used to be really into kitchen tools—I had to have a gadget for everything. Those gadgets slowly started to take over our kitchen, spreading from one drawer to another, to a cabinet, to second cabinet. And you know what? I rarely even used most of them. Have you noticed on cooking shows that chefs prep almost everything with knives? Maybe that mango pitter isn't so essential after all. I got rid of nearly every kitchen tool that had only one function and no other uses. (Sorry mango pitter!) The exceptions I made were tools that I frequently use, like my garlic press and corn zipper. But if it only did one thing and that thing could be done just as well with another tool I already have? It's out.

Get Rid of Multiples

How many saucepans and casserole dishes and baking sheets of the same size do you really need? Probably not as many as you actually have. For some sizes, I decided to keep two of each item because I use them often, but for most everything else, I kept the best of the bunch and got rid of the rest.

Purge Things You Don't Use

This is kind of related to the previous two points, but it deserves its own subheading because it's a pretty big one. I had so many things that I kept just in case. Multiple cheeseboards just in case I needed them for entertaining. Extra knives just in case my good ones were dirty. And then there were things that even I knew I wouldn't use—things that I bought because I felt like a cook should have them, but that I either didn't like using or never had any use for in my cooking. Getting rid of things you don't use will make a huge difference in your kitchen and it will make it much easier for you to find the things you do use when you need them.

Now that you have all that extra space in your cabinets from the purging you just did, you can put your small appliances in them. I had a ton of counterspace in my old kitchen, but it didn't feel like it because it was all taken up by small appliances and other kitchen miscellany. All that stuff made my large kitchen feel small and cluttered. Now, I only keep our toaster and coffee maker on the counter, along with a knife block. That's it! Even though I use my food processor and blender all the time, it's not that much of a hassle to store them in a cabinet and take them out when I need them.

Pare Down Your Dishes

Have you collected an assortment of random plates, bowls, and glasses over the years? Get rid of them! I kept one matching set of white dishware, an extra set of bowls in a smaller size for cereal, one matching set of glasses, and three smaller glasses for our daughter and got rid of the rest. (For a food blogger, this is a pretty huge deal because we hoard dishes.) Matching dishes and glasses stack easier, so this helps manage your space too.

But Don't Throw It Out!

I hate wasting, so the only things I threw out were things that were damaged or didn't work. I let family and friends pick over the rest and take what they wanted, then the remaining items went to a garage sale, and anything left after that went to a charity resale shop. If you don't want to bother selling your items, box up anything that's in good condition and donate it.