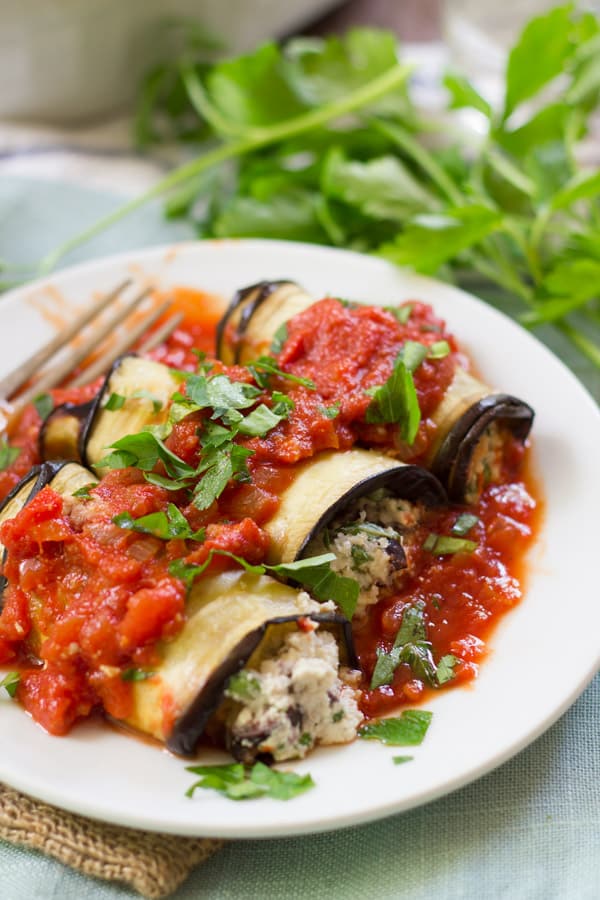 As a vegetarian, eggplant has many-a-times been my saving grace. Back in the nineties when I was afraid of tofu, and veggie burgers were nowhere to be found, there was always eggplant. Eggplant makes a wicked delicious meatless main course, and bonus: non-vegetarians are generally down with eggplant too. The only problem with eggplant, I discovered when I started cooking it up myself, is that so many eggplant-based dishes are fried, and eggplant can suck up a heck of a lot of oil. During my first home-cooking eggplant Parm experience I watched my own hand in dismay as it repeatedly tipped the bottle of olive oil again and again.

So whenever I discover a new eggplant cooking technique that doesn’t involve buckets of oil, I’m immediately on board. Eggplant involtini is my new favorite such method.

How’s the whole eggplant involtini thing work? Basically, you brush eggplant strips with just a bit of olive oil, bake until tender, then roll it up with fillings and bake it up again, this time in some flavorful sauce. Because the eggplant is sliced thin, it gets plenty tender during baking, and then it soaks up the sauce and some of the moisture from your fillings, so you still get that tender-melt-in your mouth eggplant texture, even without all the oil. 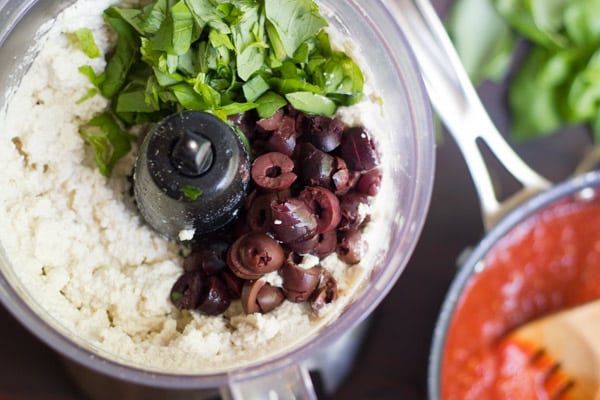 There are a lot of ways to do the whole eggplant roll and bake thing, but most versions involve some type of cheesy filling and tomato sauce. Since cheese is out for me these days, I created a vegan ricotta using tofu and raw cashews. The base is similar to the one I used in last year’s vegan manicotti, but the flavor is totally different, thanks to a few tweaks. Since we’re still in the summer season, and fresh herbs abound, I seasoned this vegan ricotta up with fresh basil. I also sweetened it up just a tad, to give a nice contrast to some salty Kalamata olives that I threw in there. The tomato sauce is really simple, and I kicked it up with some spicy harissa sauce, to give the dish even more flavor contrast. Between the sweet and salty filling, and the spicy sauce, there’s a lot of flavor going on in this dish. It turned out to be one of my favorites as of late, and I don’t think anybody is going to miss the frying or the dairy when they taste it. 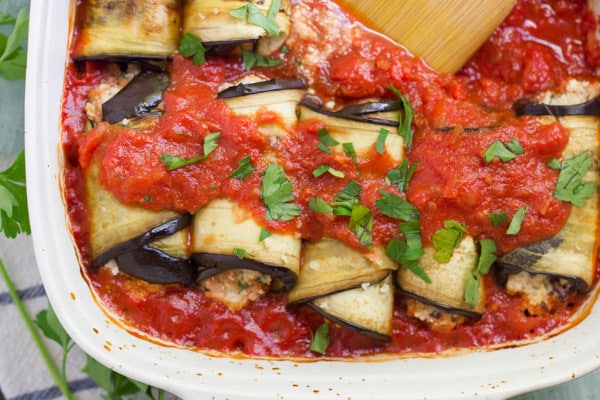 For the harissa sauce:

For the vegan ricotta filling:

Prep time does not include soaking time for the cashews. If your eggplant has been hanging around for a few days or shows some browning when you cut it open, you may need to salt it to remove the bitterness. Arrange eggplant slices in a colander and sprinkle generously with salt. Allow to sit for about 30 minutes, then rinse well, pat dry and proceed with the recipe. Feel free to use your jarred sauce for a quicker version of this dish, but if you can, I really recommend finding a very basic sauce and adding some harissa, or at least red pepper flakes, as the spicy flavor goes really nicely with the ricotta. You’ll need about 2 ½ cups of whatever sauce you go with.