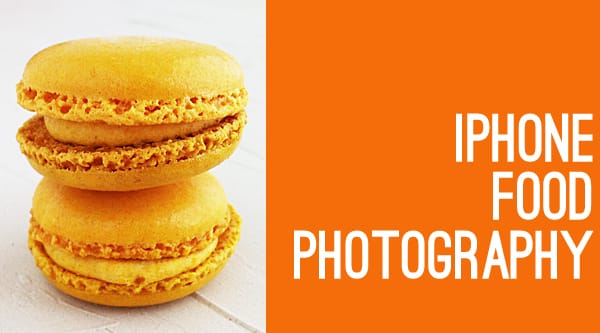 I have a Point & Shoot camera, but for some reason, it just doesn't want to photograph food. Although I've had some success using its Macro setting, I've found that the pictures I take with my iPhone always turn out better, so I use that almost exclusively on my blog.

Even though I'm planning on getting a DSLR soon(ish), I've tried to make the most of my current situation.

While I'm not a professional photographer by any means, I think I've learned enough through trial-and-error that I thought some of my experiences (and mistakes) would be helpful to others. So, in no particular order, here's what I've learned about food photography with an iPhone. (And note that many of these tips work for Point & Shoot cameras and other mobile phones too!)

The reason photographers use DSLR cameras is because of the high degree of control they allow. With an iPhone, you have very little control of your camera, so instead, you need to learn to control your environment. Good staging (something that I will admit I'm not the best at) makes a big difference, as do angles and lighting. 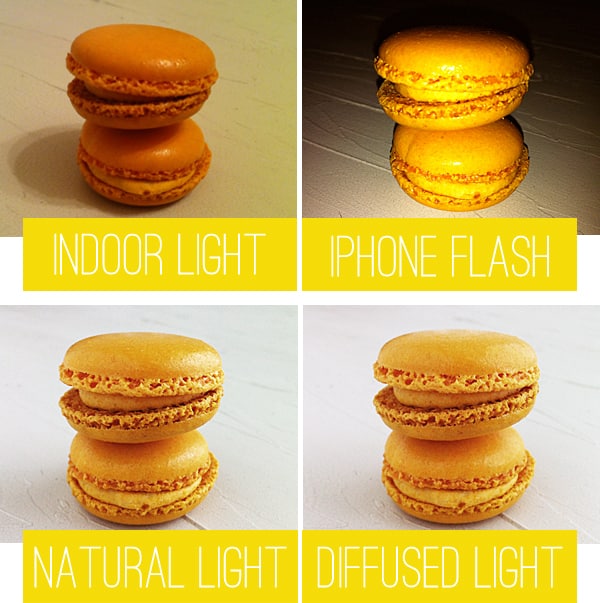 If at all possible, use natural light. This goes for any type of photography, but when you're using an iPhone that affords you little control, it's even more important.

I use my dining room table, which is right next to a large window, for all of my photographs. East and North facing windows are preferable to South and West. The best time to take photos is 2 hours before sunset--the sun is much softer at that time than it is in the middle of the day.

When you do take photographs in the middle of the day, be sure to use a sheet on the window or a diffuser to soften the light a little bit. You can see in the last photo, the natural light is diffused so the shadow is a little less harsh and the glare on the macarons is gone.

Don't use the flash.

That one is pretty self-explanatory, isn't it? Pictures of food using the flash don't turn out very well. 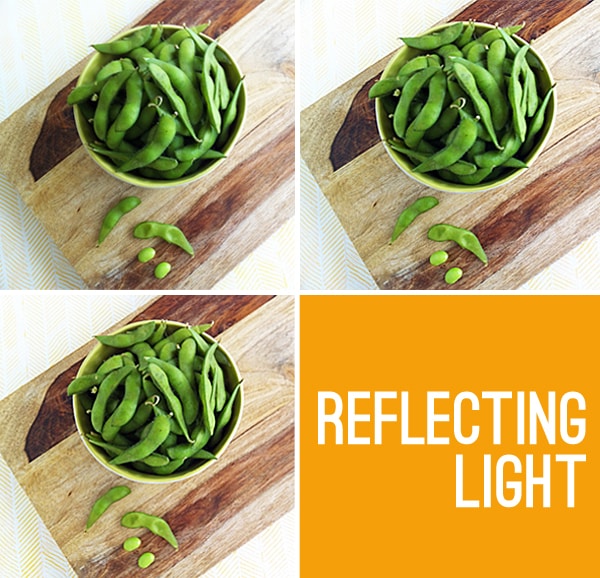 Maybe this seems a little bit silly on the surface--after all, if you're buying equipment, shouldn't you just buy a DSLR camera? Well, no, because a lot of photography equipment is really inexpensive.

I love my Portable 5-in-1 Light Reflector

, which was $8.85 on Amazon. In addition to reflecting light, it comes with a nice diffuser too.

Although the differences are subtle, in the image above, you can see the picture on the upper left has a lot of darkness in the bowl of edamame. I didn't use a foam board in that photo at all.

The second photo, on the right, uses one foam board placed to the left of subject. You can see that the harsh shadows are lessened. On the bottom, I used two foam boards, one to the left of the bowl and one in front of it.

The light coming from the window on the right is bounced around with the two boards and the result is a well-lit image. For moody shots with darker lighting, you can use the same set up with black foam boards instead of white. 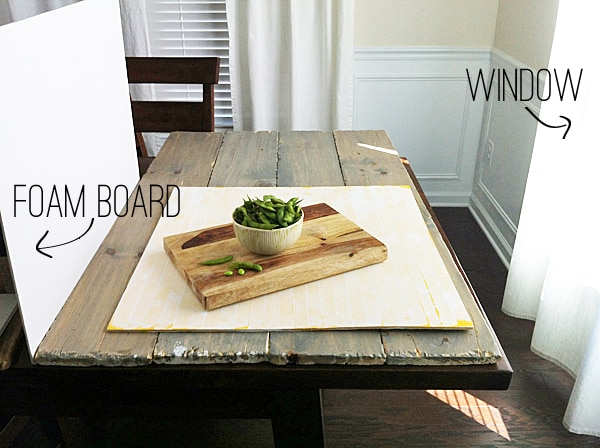 My favorite app is Big Lens, which adds bokeh to a picture. I haven't used it on my blog yet because I'm still working on perfecting it (as you can see from the photo--like I said, I don't claim to be an expert!), but bokeh means that the picture is focused on one object and the rest is blurry. Here's an example: 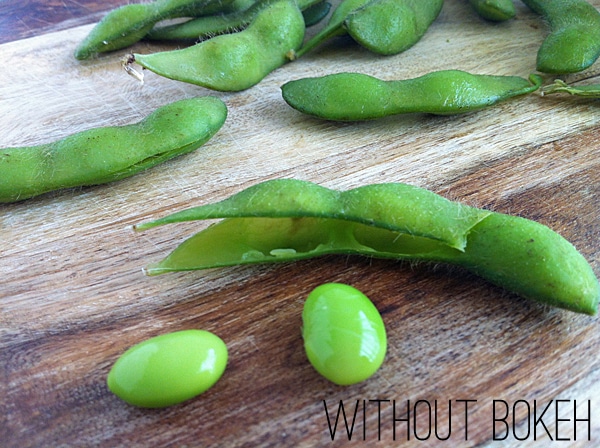 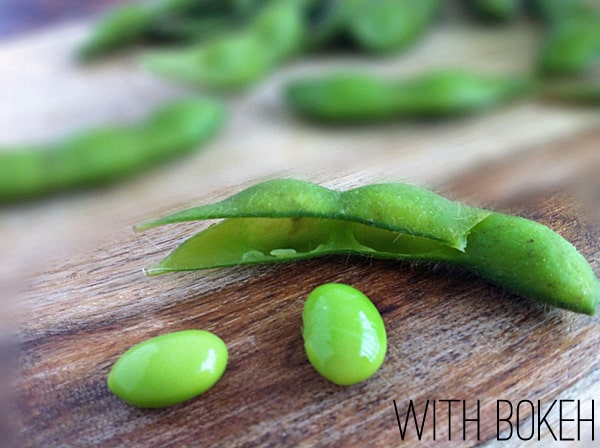 Sometimes I'll think I got a good shot, but when I look at it on my computer, it's blurry. Take dozens of pictures at several different angles for every dish you're photographing. And be prepared for the fact that sometimes, you just won't be able to get it right no matter what you do.

Learn how to use Photoshop Elements or other Editing Programs. 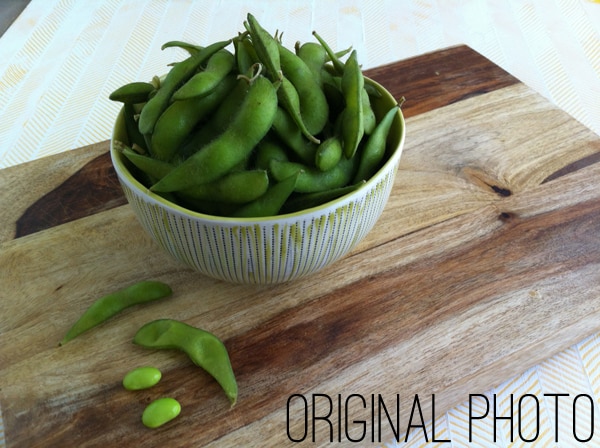 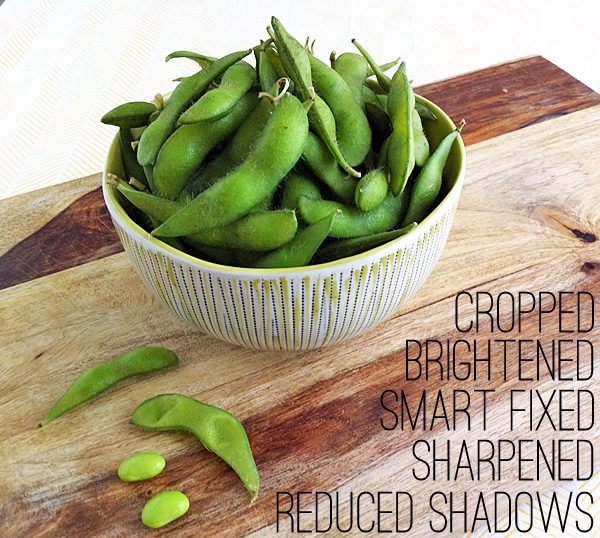 If you prefer to do your photo editing online, you can use PicMonkey, and there are also numerous photo editing apps available for the iPhone. (Personally, I like seeing my photos on the computer and editing them that way, so I can't make any recommendations for apps.) At a minimum, I always crop and sharpen my images.

This is the most important tip--don't get bummed that you don't have a fancy camera. For a while, I found myself sinking into a deep depression whenever I read about someone else's super awesome photography equipment. Why them?! WHY NOT ME?!

But you know what? A lot of the worst pictures I've seen are ones taken with $800 cameras. (My favorites are the ones where half the dish is eclipsed by a shadow of the person taking the photograph.)

A camera will do you no good unless you know how to use it--by learning how to take awesome food pictures with your phone, you're learning basic photography skills that will help you when you do finally get your sweet, sweet DSLR.

ETA: It's now several years later and I've since gotten my DSLR and developed my photography skills quite a bit more. So no, in case you were wondering, the latest photos on my site are not taken with my phone! But I stand by the fact that great photos can be had with just an iphone in hand.

I've updated this tutorial with some tricks I've learned since I originally wrote this and some new graphics. And it's true, a lot of the tips in this post are things that I use with my DSLR camera too!