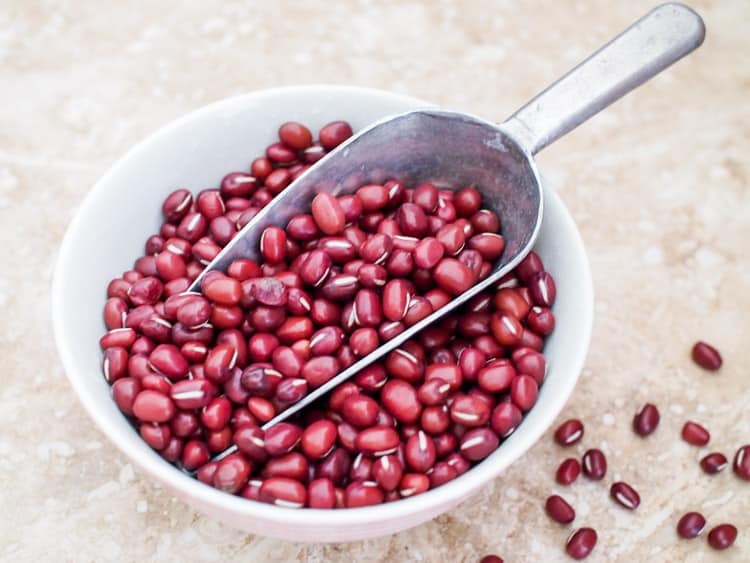 If you've enjoyed Japanese desserts, chances are you've had adzuki beans. They are apparently the second most widely used legumes in Japan after soybeans, and are commonly made into a bean paste to be used in sweet recipes. Adzuki, or more accurately, "azuki," translates from the Japanese as "small bean." In other Asian countries, where they are also a popular ingredient, adzuki beans may just simply be known as red beans (hongdou in Chinese).

Also sometimes spelled azuki and aduki, adzuki beans are small, red beans originating from China and are popular in Asian cooking. Although they are also simply referred to as red beans, they should not be confused with kidney beans, which are twice the size and shaped like kidneys.

Adzuki beans are a great source of protein, fiber, iron, magnesium, and B vitamins. Said to be relatively easy to digest, they are a staple of the macrobiotic diet and acknowledged in traditional Chinese medicine for their warming, healing properties.

Adzuki beans have a mild, nutty taste with a sweet quality about them that explains why they fit so well in sweet dishes. In terms of texture, they are soft but not completely smooth and have a mealy feel.

They are normally sold dried and, like other dried beans, should be stored in an airtight container in a cool, dry place away from sunlight. While they keep for a long time that way, it's best to use them within a year because they tend to dry out with time.

How do you use them?

For better digestibility, dried adzuki beans are soaked in water for at least 4 hours or overnight, and then drained and cooked in fresh water. It takes about an hour of simmering for the beans to be tender. As a guide, 1 cup of dried beans yields about 3 cups of cooked beans. Adzuki beans are a good source of plant-based protein for vegetarians and can be used like any other pulse: added to salads and soups, for example.

Due to their naturally sweet quality, they are primarily used in sweet confections in many Asian countries, so it's not uncommon for them to appear in pastries, cakes, desserts, and ice cream (now, that's an idea!). Sweet adzuki bean soup is a popular way to enjoy the beans in their basic form. The beans are also often turned into a sweet paste to be used as fillings in buns, dumplings, and mooncakes.

Here's an idea: you know those flourless black bean brownies? Try making them with adzuki beans instead!

Three Bean Salad by Pass Me Some Tasty

Sweet Red Bean Popsicles by What To Cook Today