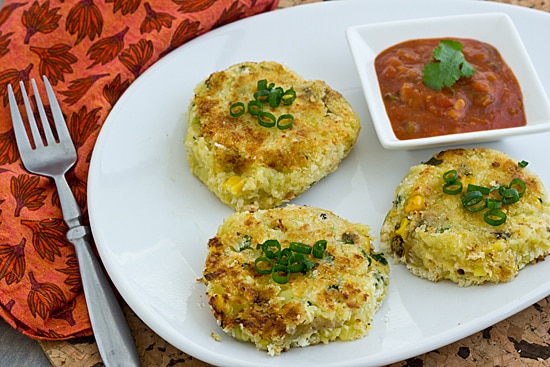 While there are many foods with good vegetarian and vegan equivalents (I'm looking at you, ice cream!), it's difficult to find a good vegan cheese. For years, whenever I'd find a new one in the refrigerated section at Whole Foods or the local co-op, I'd excitedly put it into my grocery cart and inevitably, my husband and I would hate it. Maybe something would have the texture of cheese but not the taste or the taste but not the texture--nothing was ever quite right.

After having the opportunity to review Daiya vegan cheese, I have to say it's the best substitute for cheese that I've used. Is it exactly like cheese? No. But it's definitely the best vegan cheese I've ever cooked with because, unlike most other cheese substitutes, it actually melts. After putting the Pepperjack Style Shreds on baked potatoes just to test out the taste and texture, I decided to try making potato corn cakes with them. This is the perfect way to use leftover mashed potatoes and the Pepperjack shreds gives these fritter-like cakes a nice little kick. 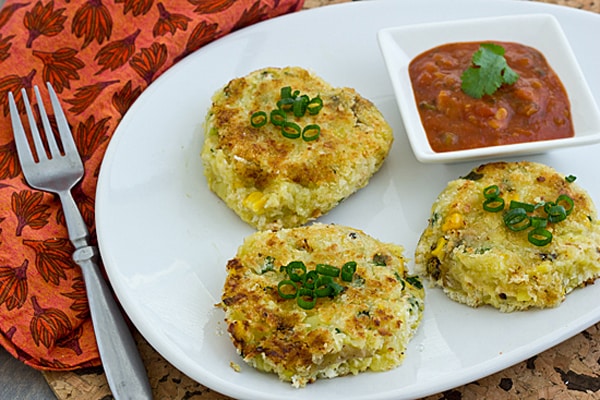 Disclosure: I received a sample of Daiya vegan cheese to facilitate this review, but all opinions are my own--I only review products on my blog that I truly love and recommend to my readers. No monetary compensation has been received.