We hear about omega-3’s all the time. But what are they? Why do we need them? How do we get them in our diets? What are the best sources of omega-3’s for vegans and vegetarians? And what is Ahiflower? 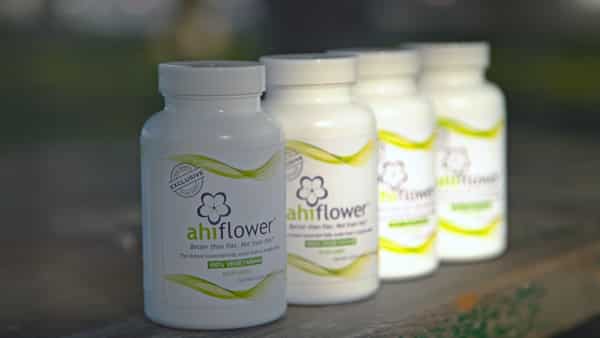 Omega-3 fatty acids are polyunsaturated fatty acids (PUFA) that are essential for human health. They’re essential because our bodies can’t produce them; we need to get them from food or supplements.

Omega-3’s are important for many bodily functions like building and maintaining healthy cells, blood clotting, and vital brain and nerve function. These heart-healthy fatty acids are also associated with protection from heart disease and stroke. Ongoing research is also identifying benefits for a wide range of conditions such as rheumatoid arthritis, type-2 diabetes, age-related brain decline, and some cancers.

ALA is broken down as an energy source for our cells – as much as 85% of dietary ALA is used in this way. ALA is also used to synthesize EPA and DHA. Our bodies can’t make it from scratch, so we need to seek out food sources including flax seeds, walnuts, chia seeds, hemp seeds, tofu, tempeh, spinach, cauliflower, winter squash, and olive oil.

DHA is of particular importance for brain function. Approximately 15-20% of all the fat in our brain is made up of DHA. Low DHA levels are associated with cognitive impairment, reduced neurological development, and nervous system deficiencies. DHA is especially important during pregnancy and lactation.

EPA contributes to our inflammatory system. The proper function of this system depends on the presence of messaging molecules called prostaglandins, many of which are made directly from EPA.

Sources of DHA and EPA include fatty fish (such as salmon, tuna, and mackerel), egg yolks, and some dairy products.

Another exciting omega-3 fatty acid that is coming into the mainstream is SDA (stearidonic acid). Similarly to ALA, our bodies can convert SDA to EPA and DHA, and, it turns out, SDA does this much more efficiently. The body converts SDA to EPA at a rate of up to 30%, compared to 3-6% for ALA. A limited number of foods contain SDA, such as Ahiflower.

Okay, so what does this all mean?

What this all adds up to is that our immune, cardiovascular, nervous, and inflammatory systems can’t function properly without sufficient amounts of EPA and DHA. And since SDA and ALA are used to synthesize EPA and DHA, they play a critical role in the health of many body systems. This is especially important for vegetarians and vegans who don’t eat many sources of EPA or DHA.

Typically the recommendation is to consume fatty fish or fish oils, but that doesn’t work for us vegetarians. And fish oil production is not at all eco-friendly, removing vital organisms from the food chain and causing havoc in our oceans. Flax has long been viewed as the best vegetarian source of omega-3’s for vegetarians, but with questions surrounding both the source of flax and the efficiency of ALA conversion, many people are seeking out a better alternative.

Ahiflower, or Buglossoides arvenis, has been growing in the English countryside for centuries. Once thought of as a weed growing in fields of wheat and barley, it is now gaining recognition for its unique and unparalleled omega oil profile. Ahiflower is rich in the heart-healthy omega-3 fatty acid SDA, and unlike flax, Ahiflower also contains omega-6 fatty acids in just the right dose, as well as omega-9 fatty acids.

Because of Ahiflower’s incredible complement of fatty acids, it’s one of the best omega-3 sources there is. Consider that it would take as much as four times as much flax seed oil to deliver the same amount of EPA in the body as provided by Ahiflower oil. Ahiflower is 100% vegan and non-GMO.

Ahiflower is also the perfect choice for a sustainable omega-3 supplement. Not only does a vegan omega-3 take pressure off of fish oil production, but all Ahiflower is grown by carefully selected farmers in the United Kingdom, then processed at a single facility in Canada, which means that, unlike flax, you can be totally sure about your source. Growing Ahiflower requires less water than flax, and provides a wild-life friendly environment to keep the pollinators happy.

Well, I think it’s fair to say we could all benefit from more omega’3 fatty acids in our diets. For those who are strict vegetarian or vegan, it’s considerably more difficult to get EPA and DHA directly from food. The recommendation is, therefore to increase your intake of SDA or ALA-containing foods. If you currently rely on ALA-containing foods or eat little to no fish, you’d likely benefit from SDA-rich Ahiflower oil.

The American Dietetic Association recommends and average of 500mg of total EPA and DHA per day. One teaspoon of Ahiflower oil contains 850mg of SDA and 2090mg of ALA, which converts to approximately 320mg of EPA. By comparison a teaspoon of flaxseed oil yields only about 80mg of EPA by conversion.

The Child Health Foundation recommends that pregnant and lactating women should get an average of 200mg of DHA per day.

For vegans and strict vegetarians, a recommendation is to increase consumption of SDA or ALA-containing foods since you’re relying on your body to convert these to DHA and EPA. Give Ahiflower oil a try as one of the best omega-3 sources out there.

Previous Post: « Why Ahiflower May Replace Flax Seed Oil for Vegetarians and Vegans
Next Post: 13 Vegan Quick Breads Everyone Will Love (Not Just Vegans!) »