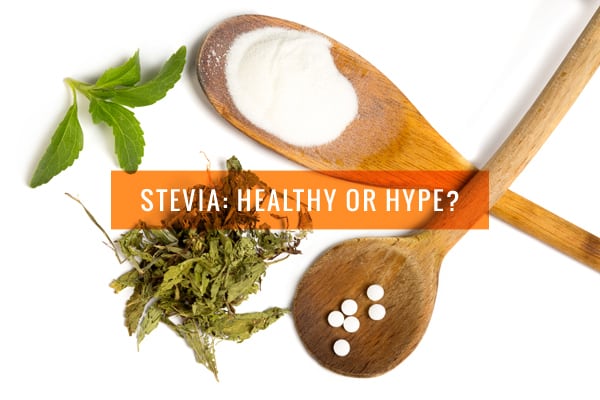 Since stevia hit the markets in 2008 it's exploded in popularity. But what is it? Is it safe? And is it healthy or hype? Read on to find out!

Stevia is a plant native to South America that has been traditionally used to sweeten beverages. The Guarani Indians in Paraguay have used stevia since the 16th century, crushing the leaves to sweeten tea and medicine.

In the mid-20th century researchers working with the stevia plant isolated the sweetest compounds in the plant, which are called steviol glycosides. The best tasting of these is called Reuaudioside A, which is over 200 times sweeter than an equal weight of table sugar.

The use of stevia extracts was not approved in the US until 2008 when sweeteners made from Rebaudioside A were first accepted as Generally Recognized As Safe (GRAS) by the FDA.

Stevia extracts are marketed under the brand names TruVia, PureVia, Sweetleaf, Steviacane, and Stevia in the Raw, to name a few. The FDA has not permitted the use of whole-leaf stevia or crude stevia extracts, as their use in food is not currently considered GRAS.

While the word ‘stevia’ technically refers only to the whole plant, to keep things simple we’ll use it to refer to the steviol glycosides on the market as sweeteners.

Well yes. And no.

Stevia is considered a non-nutritive sweetener, since, at the quantities typically used, it is all but free from calories. Unlike other non-nutritive sweeteners, such as aspartame or acesuflame-K, stevia is derived from a plant, which means that it can be marketed with the word ‘natural’ and appeal to those looking for a natural low-calorie sweeteners.

In the whole-leaf state, stevia triggers the tongue’s taste receptors for both sweet and bitter. Food scientists have figured out how to chemically alter the molecule and remove the less appealing bitter parts.

So if by natural you mean, “originally comes from a plant,” then yes. But if by natural you mean, “whole, holistic, or unadulterated,” then no, the stevia on the market today most definitely does not fit this definition. And not all stevia extracts are created equal! So do your homework on stevia brands to find one with limited additives and an extraction process you're comfortable with.

It is important to note that the FDA has not approved whole stevia leaves or crude ground stevia as GRAS, only highly purified stevia extracts. This is due to some long-standing concerns that stevia may have an effect on blood sugar control, as well as on reproductive, cardiovascular, and renal systems. But, bear in mind that the products on the market today are not stevia, they’re highly purified extracts and are seen as GRAS.

As with so many other substances, the negative effects of stevia have been noted over the course of animal testing and at very high levels of intake, and since people are not mice, we don’t know whether these effects will carry through to humans. There’s a good chance that light to moderate consumption of stevia is safe.

But here’s the thing. There is a brain-body reaction to sweetness (called the cephalic phase response) that starts with receptors on the tongue. Whenever we eat or drink anything sweet, our bodies assume we’ve taken in food energy and set in motion a chain of reactions to deal with the incoming energy, regardless of whether actual calories accompany that sweet taste or not. If we set this chain of events into action enough times without incoming energy, the body begins to reprogram its self in a way that hinders the ability to regulate blood sugar in the long term. Think about it sort of like the boy who cried wolf. And, we have sweetness receptors in the intestines, liver, pancreas, and brain to consider as well.

We also respond hormonally to sweeteners, and there is increasing evidence that non-nutritive sweeteners may even impact the makeup of our gut mircobiome. We just don’t know what the long-term implications of this might be.

Another concern with using high-intensity sweeteners such as stevia is a reprogramming of our taste for sweets – our palates can change over time with such intense sweet flavours.

Is stevia healthy or hype? Honestly, I don’t know.

At the end of the day, stevia comes from a plant, so I suspect it will turn out to be a much better option than artificially derived sweeteners such as aspartame. The reality is that there just hasn’t been enough research on the effect of non-nutritive and intense sweeteners, and even the current rate of sugar-sweetened sweet consumption has never been seen before in human history. We’re probably 4 or 5 decades way from being able to really understand the impact of this kind of sweetness in our diets.

I personally don’t use stevia because it’s out of my comfort zone, and I firmly believe that there’s no magic bullet. If something seems to good to be true (like an amazing all natural zero calorie sweetener?), it probably is.

If you want to use stevia, my advice is to use it in moderation just as you would with any other natural sweetener such as honey, maple syrup, or good old-fashioned cane sugar.